Hertz stock made its way back into headlines recently when it announced it would "re-IPO." This news came with an ambitious plan to electrify its fleet with an order of 100,000 Teslas.

This comes after the company went bankrupt. Back in May of last year, the car rental market was hit hard by the pandemic. It left Hertz Corp. (NYSE: HTZ) with $19 billion of debt and 700,000 idle rental cars. 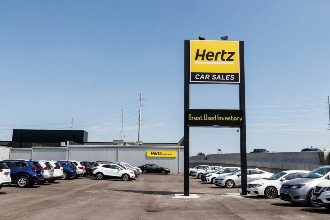 But Hertz's 2021 second quarter earnings per share (EPS) was above expectations. The company remains positive it can rise from the ashes of bankruptcy with a fresh start.

We're not so sure.

While the company is over 100 years old, the last couple years are cause for concern. At the same time, it's making moves to separate itself from the market and ride the wave of increased travel demand in the post-pandemic climate.

Let's take a closer look at the newly restructured company and whether you should buy Hertz stock after the "re-IPO."

Why Hertz Stock Is Winning Over Investors Now

Hertz has been a victim of poor leadership and accounting. CEOs were pocketing millions in payouts while planning to lay off more than 30,000 employees.

Money Morning Chief Investment Strategist Shah Gilani warned investors last year, saying that, "This is not a stock anyone should touch with a borrowed 10-foot pole. It's radioactive..."

The same week Shah said that, Hertz declared bankruptcy to the tune of $24 billion, with about $1 billion in cash on hand. The century-old rental car company entered bankruptcy proceedings and restructured its debt by selling nearly 180,000 vehicles to investment firms and shares on the over-the-counter (OTC) markets.

During the restructure, executives eliminated $5 billion in debt and gained $2.8 billion in credit and a $7 billion asset-backed financing capability. In addition to selling off vehicles, it sold off its Donlen fleet leasing company for close to $891 million and focused on operational efficiency.

The money it made went straight back into the business, but it comes with the risk of cutting its vehicle base from 517,973 vehicles down to 350,122.

The company didn't just sell off vehicles. It announced this week its $4.2 billion plan to offer the largest EV rental fleet in North America, and one of the largest in the world. This includes an initial order of 100,000 Teslas by the end of 2022 and a new EV charging infrastructure across its global operations.

As part of a premium and differentiated rental experience, customers who rent a Tesla Model 3 with Hertz will have access to 3,000 Tesla supercharging stations throughout the United States and Europe. This initial order of Teslas will account for 20% of Hertz's global fleet.

These reports from Hertz are once again catching the attention of meme stock traders. These investors hope to pile into out-of-favor companies and send their share prices soaring.

But this wouldn't be the first time Hertz was a "Meme Stock.'"

That's right... Hertz is one of the original meme stocks. And it's turning into one again.

Months before GameStop and AMC made waves and confused Wall Street, these same investors were talking up Hertz. The retail investors targeted the company following its announcement that it would file for bankruptcy.

While Hertz was one of the biggest corporate casualties of the pandemic, it caught the eyes of online traders who bid up its shares by 825%. Wall Street analysts couldn't understand why retail investors would buy stock in a company that couldn't meet its debt obligations.

This caught the eye of regulators who scrutinized the company. Hertz declined to comment.

One investigator suggested Robinhood was behind the spike. It was certainly one of the most popular stocks on the trading platform at the time. Even when Hertz issued more shares and said its stock could be worthless, people bought in. And somehow, they were rewarded.

A year after declaring bankruptcy, Hertz accepted a $6 billion bid from Knighthead Capital Management, Certares Opportunities, and Apollo Capital Management to exit bankruptcy. The reorganization included a payout to equity shareholders. Andrew Glenn, managing partner of Glenn Agre Bergman & Fuentes, arranged the winning bid for shareholders, and was surprised: "That doesn't happen every day in bankruptcy. In fact, I've never seen it happen."

Shareholders received a payout of about $7-$8 per share, which is more than what any retail investor purchased in the summer of 2020. In total, Hertz says more than $1 billion was returned to shareholders.

Now that Hertz is back in the news with a new stock offering and a splashy campaign to electrify its vehicle lineup, retail investors are prepping for a second round of gains with Hertz.

But will lightning strike twice?

If the past is any indication of the future, it's just not worth it.

For starters, it's worrisome that after selling off 180,000 of its vehicles to chip away at its $24 billion debt, it bought $42 billion worth of Teslas to add onto its fleet. Although offering EVs is a part of its plan to come back, it's aggressive and risky.

Another reason it's smarter to steer clear of the stock for now is its upcoming "re-IPO." Why would a company that just bounced back from bankruptcy re-IPO? It needs cash.

IPOs are meant to raise capital. Although Hertz has been public for some time, it went bankrupt. And just months after climbing out of bankruptcy, it's asking the public for more money. That's another red flag for investors.

Retail investors that hop on this early may be investing in something when things look better than they are, or will be long term. On top of that, IPOs tend to experience a dip early on, which is just another reason to wait it out.

Since its bailout, there hasn't been enough to indicate the direction Hertz is trending in the post-pandemic climate. It's riding off the hope of potential travel increase, but no one knows what that looks like for the company yet.

It's true, there are investors who made a quick buck off meme stocks. But there are smarter ways to invest your money. If I were you, I'd leave this one alone.

Instead, Shah has an idea of a safer way to invest. How does a $20 EV stock that could triple your investment sound?

Not only does he have a $20 EV stock winner for you, he also gives you a better look at what the EV landscape in China looks like right now. You can read all about it here...

And Shah has one more opportunity for you.

It's a way to profit from new stocks via special purpose acquisition company (SPAC). One that could triple your money...