Robinhood Markets Inc. (NASDAQ: HOOD) bills itself as the champion of the "little guy."

All its products target wider access for retail investors playing Wall Street. It was the first to offer commission-free trades. And later, the company gave retail investors an entry point into IPO investing. 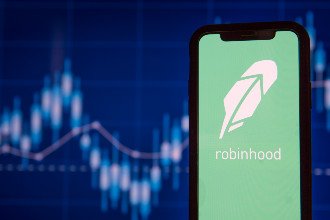 But retail investors won't return the favor. In fact, they could potentially devour Robinhood stock. And when you see why, it's hard to look at it any other way.

Robinhood was one of the big new stocks to watch in 2021. We told you not to buy the hype.

Now, look what happened: Robinhood stock has dropped as much as 51% in the last three months, and it keeps falling.

Retail traders are glad they stayed away from the Robinhood IPO. And they might be glad they don't buy this stock on a dip, either.

Retail investors are about to put the final nail in the coffin. And the scary thing is, it could happen at any moment.

In early 2021, Robinhood came under fire for pausing trades on specific stocks like GameStop Corp. (NYSE: GME) and AMC Entertainment Holdings Inc. (NYSE: AMC). The company could not keep up with clearing house requirements - it did not have enough shares to cover all the orders being made.

Robinhood users were not happy with this, of course.

They thought they had figured out a way to best the hedge funds short-selling stocks into the ground. Because these hedge funds were short GME and AMC, the mass buy-up from retail traders forced short-sellers to buy the stocks at higher and higher prices to cover their shorts.

When Robinhood trading halted, many speculated that hedge funds were bending the rules in their favor, making backdoor deals with Robinhood to stop the short squeeze. That was before Robinhood came out with a statement saying otherwise.

Whatever the case, though, this entire fiasco showed the power of the retail trader over not only hedge funds, but Robinhood itself. It's key to why Robinhood might not be around for as long as you might think.

Turns out, the "little guy" championed by Robinhood is just as interested in profits as any hedge fund.

That could spell disaster for this broker.

Individual traders today are more interested in direct ownership of their assets than ever before. Trends like decentralized finance (De-Fi) can attest to this.

De-Fi, powered by the blockchain ledger, gives "ownership" a new meaning. Investors now can prove their ownership of an asset via blockchain, a record which can't be altered by third parties.

You see examples of this in the Bitcoin and NFT worlds. Digital items might appear to have no intrinsic value, but the proof of record and finite nature of the items with that proof make them valuable to today's trader.

This constitutes modern ownership, and the same concept is bleeding into other investing areas, namely Robinhood. Traders want to really own their investments.

For example, if you were to invest in Bitcoin via Robinhood, you would not "own" the Bitcoin the same as if you had your own private crypto wallet.

The phrase "not your keys, not your crypto" prevails for that reason. You don't get a unique crypto wallet key trading crypto on Robinhood. You just buy and sell dips with cash. You can't actually use the Bitcoin as currency at all, because you don't own it.

That's the crypto side of things. But it brings attention to how "ownership" works in stock trading as well.

Typically, when a retail trader buys a stock on Robinhood, WeBull, TDAmeritrade, or some other online broker, the broker "gives" the retailer those shares. What makes this difficult for retail traders is that shares are registered under the broker's name.

That gives the broker - for example, Robinhood - an inordinate amount of freedom over retail traders. They can, and do, "credit" shares to traders when a "buy" order is made. It's essentially an IOU that comes in handy when Robinhood only has a finite "stock float" to draw from.

Another word for it is a "phantom share." Brokers can fill buy orders with "phantom shares" before others are sold while maintaining clearinghouse requirements.

We saw this go awry in the January 2021 short squeeze. If they don't have sufficient shares to meet clearinghouse requirements, they must do something dramatic, like pause trading on certain stocks.

The situation could get much worse for Robinhood, though, if we get the mother of all short squeezes (MOASS) that traders are pushing for...

This Could Destroy Robinhood

Robinhood traders now want to own shares directly in their name. All they have to do is buy shares from Robinhood, and once the shares clear, they can make it happen through the Direct Registration System (DRS).

Direct registration agents like ComputerShare give people all the rights and privileges of share ownership, without the middle-man playing around with shares when traders aren't looking.

Massive companies like these using a certain direct transfer agent could point to many others using the same one. Now, imagine if all the shares of all those companies were switched from Robinhood to ComputerShare. Robinhood would collapse.

While this exact scenario is unlikely, something similar to it is more likely than not to happen in the future. The only thing that stops traders from directly owning their shares for now is the convenience of brokers like Robinhood.

Since Robinhood is not a long-established broker, it may not have the fortitude to withstand the blowback from another trading pause. And that's on top of Robinhood's other problems.

We've already covered how Fidelity, Charles Schwab, and others pose a threat to Robinhood's longevity. Schwab is even merging with TD Ameritrade to show that this market can take a variety of forms and leave Robinhood in the dust.

So far, Robinhood has made it on a strong brand name and convenience.

The company lucked out as one of the first to offer commission-free trading. It's also the first to give retail investors IPO access.

Down the line, it could continue innovating. But so far, when you really get down to it, this company is another "mission" stock that could fizzle out at any time.

Another gigantic short squeeze, another failure in meeting clearing house requirements, would expose flaws in the "phantom share" trading model that will be hard to redeem in the eyes of today's retail investors.

In an increasingly independent and decentralized world, future investors will need extra convincing to work through a middle-man simply for convenience's sake.

Bottom line: Robinhood is still a questionable stock to own.