MicroStrategy Inc. (NASDAQ: MSTR) CEO Michael Saylor has become famous - or infamous, depending on how you see it - for replacing the cash on his company's balance sheet with Bitcoin (BTC).

As of Sept. 30, MicroStrategy said it holds 114,042 BTC worth approximately $7.64 billion at Tuesday morning's Bitcoin price.

But because the company holds $7.64 billion worth of Bitcoin, I've seen mainstream financial news stories suggest MicroStrategy as a "play" for investors looking to get some Bitcoin exposure.

And it's undeniably true that, for the 14 months since August 2020, when MicroStrategy started loading up its balance sheet with Bitcoin, its stock has more or less tracked the BTC price: 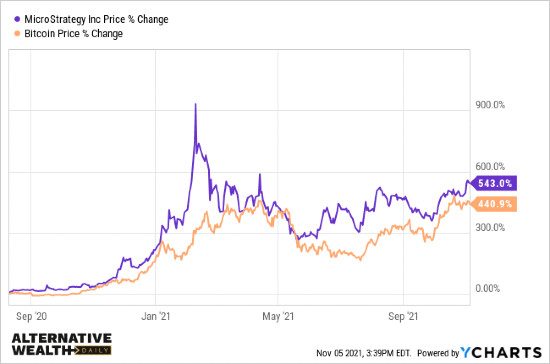 Of course, there's no guarantee whatsoever this correlation will continue, but so far, the results have been impressive. The stock has outgained the broad S&P 500 index by a factor of 13.5X.

Now, compare that to MicroStrategy's performance in the 14 months prior to the pandemic-caused stock market crash. MSTR rose just 20.6%, significantly lagging the S&P 500's gain of 26.4%.

So clearly, Saylor's Bitcoin buys have made a huge difference - but before running out and buying MicroStrategy stock, you need to know this...

As I said, MicroStrategy isn't a crypto company by trade; it's an analytics and business intelligence company. The company considers its Bitcoin investments a strategy apart from its primary business.

It's created an odd dynamic where the Bitcoin part of the business is much larger than the original, legacy business. MicroStrategy's market cap was just under $1.2 billion before the Bitcoin purchases began. Now it's valued at $8.4 billion.

MicroStrategy's analytics business is firmly in "recovery" mode. It's recovering from the pandemic's effect on the economy, of course, but, importantly, its revenues had been in steady decline since 2014.

My guess is that, once Saylor got hooked on Bitcoin, he realized it was just the jolt his company needed.

But while Bitcoin has succeeded in multiplying MSTR's value, the effort has come at a considerable cost.

In other words, he diluted shareholders to buy Bitcoin.

And he's not done.

"We will continue to evaluate opportunities to raise additional capital to execute on our Bitcoin acquisition strategy, which has the potential to offer asymmetric upside to our shareholders," Saylor told analysts during MicroStrategy's Q3 earnings call.

Buying Bitcoin with cash is one thing. Even that carries a lot of risk should the price of Bitcoin fall significantly, which it does frequently. But borrowing money to buy Bitcoin adds still more risk.

For now, MicroStrategy stock is tracking Bitcoin because investors impatient for a spot in a Bitcoin exchange-traded fund (ETF) see MSTR stock as a "good-enough" substitute, just like the ProShares Bitcoin Strategy ETF (NYSEArca: BITO), the flawed futures-based Bitcoin ETF we have now.

But when the U.S. Securities and Exchange Commission (SEC) does approve a spot Bitcoin ETF, capital will flock to the better product. That will likely cause MicroStrategy stock to trade a discount to the Bitcoin price.

But that's by no means your only option. Bitcoin and cryptocurrency in general are huge investment trends, and even if you're hesitant to dive headfirst into Bitcoin, you can get exposure with a few quality stocks...

My research says these are your top three choices...

The Three Best Stocks to Buy for Bitcoin Exposure

Coinbase Global Inc. (NASDAQ: COIN) went public via a direct listing on April 14. It's is the most popular U.S.-based cryptocurrency exchange - what I like to call the "AOL of crypto." It's an ideal on-ramp for new and inexperienced crypto investors, with its transaction fees (the bulk of its revenue) setting the company up as the chief toll collector in this space.

While that revenue stream could eventually face pressure from rivals that charge less, Coinbase recently announced it is testing a subscription service called Coinbase One that would offer zero-fee trading and prioritized phone support. The subscription strategy is essentially an insurance policy against the possibility of reduced fees in the future.

The Coinbase stock price does not exactly track the price of Bitcoin, but it does generally follow it. After a rocky summer, Coinbase stock found its footing in October and is trading at about $344 per share. The one-year consensus price target is $382.65. But if Coinbase captures the lion's share of the retail trade expected to enter this sector over the next few years, the price should go much higher.

Grayscale Bitcoin Trust (OTC: GBTC) tracks the price of Bitcoin almost exactly, but it's a hedge fund, not a stock, launched in 2013 as a way to create a "backdoor" Bitcoin ETF that did not require Securities and Exchange Commission (SEC) approval. At first, only accredited investors could buy shares, but after a 12-month period, those early investors could sell shares to anyone on the over-the-counter (OTC) market. Because of that loophole, retail investors can buy GBTC through their brokerage account.

Like a commodity ETF, Grayscale does own Bitcoin to back the shares. But it suffers from a disadvantage: It can't create and destroy shares as easily as a SEC-approved ETF can. Now that the SEC has approved futures-based ETFs, Grayscale has applied to the SEC to have GBTC converted to a full-fledged spot-based Bitcoin ETF, which would be a big deal.

For most of this year, GBTC has traded at a 15% to 20% discount to the actual price of Bitcoin. But if the conversion to an ETF succeeds, that discount will likely disappear - with anyone who holds GBTC shares pocketing the extra gain.

Voyager Digital Ltd. (OTC: VYGVF) is, like Coinbase, a U.S.-based crypto brokerage founded by veterans of companies like E*TRADE and Lightspeed Financial. It also offers high interest rates (up to 12%) on the crypto that users keep in its smartphone app.

While Voyager gets less attention than Coinbase or Robinhood Markets Inc. (NASDAQ: HOOD), it's a strong competitor. In the September quarter, Voyager generated more revenue from crypto trading than Robinhood ($60 million vs. $51 million). Voyager's number of verified users more than doubled from 1 million in April to 2.15 million in September.

As a crypto brokerage, Voyager's stock price will loosely track the Bitcoin price. But it has other possible catalysts. For one thing, it is seeking a listing on the Nasdaq, which would surely boost the stock price. Voyager is also a potential acquisition target - its crypto business is a convenient bolt-on for a major name like Charles Schwab Corp. (NYSE: SCHW) or Fidelity Investments.

The performance potential of these crypto stocks really drives home the sheer wealth-generating power of not just crypto, but digital assets in general. Over at Alternative Wealth Daily, where I serve as an advisory board member, we've put together a deeply experienced brain trust of experts, including Nick Black and Tom Gentile, dedicated to researching the best digital asset opportunities for subscribers. You can go right here and check out the menu of free Investor Reports, including three "penny cryptos" that could be millionaire-makers.