It’s nice to be proven right – and it’s even nicer when being right means pocketing gains.

I’m talking about our focus on clean energy and some of the outstanding penny stocks found in that sector.

After some “irrational exuberance” took hold at the end of 2020, the sector, as tracked by the iShares Global Clean Energy ETF (NASDAQ: ICLN), blasted more than 57% higher… only to fall back just as far by early March 2021 in a textbook correction.

But since then, we’ve seen healthy, “sustainable” (pun absolutely intended) growth in clean energy, with the ICLN up 15% or so since its lows last month.

This action has me more convinced than ever that clean energy has to be a part of every investor’s holdings. That means everything from mega-caps and exchange-traded funds (ETFs) to hold over the long haul to tiny, fast-moving microcaps that can double virtually overnight.

And that brings me right to today’s penny stock recommendation…

The Stock Poised to Hand Out “Carbon Copy” Profits

NewHydrogen Inc. (OTC: NEWH) is a relatively recent subsidiary of BioSolar, and it’s 100% focused on the production of “green” hydrogen. Hydrogen is essential for producing fuel cell electric vehicles (EVs). NewHydrogen uses electrolysis to extract hydrogen from regular old water – ripping apart the “H” and “O” in “H20” to use the remaining hydrogen to power fuel cells.

Hydrogen fuel cell tech is, at the moment, a kind of compliment to rare-earth battery-powered EVs, but ultimately, it’s very possible the two technologies will compete in a kind of clean energy version of the – dating myself here – “VHS vs. Betamax” war some of us remember from the 1980s. It’s really too early to even think about handicapping a winner in that matchup, but fuel cells may very well hold the edge there, because they can be made using renewable, sustainable means with elements that are abundant all over the planet – as opposed to rare rare-earths.

But about those short-term trends… 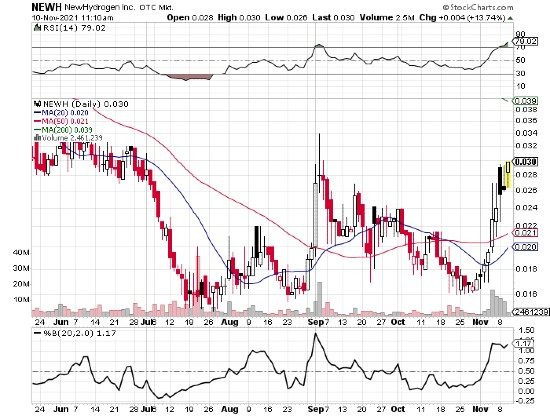 NEWH is checking the right boxes.

Its Bollinger bands are sitting near their smallest ratio since late August. The shares actually took off in September once they broke the top Bollinger band; gains topped 85%.

Its 50-day moving average (MA50) is bullish; its “trader’s trendline,” the 20-day moving average (MA20), is bullish, too. The stock is above both right now. Interestingly, the MA20 is below the MA50, which was bullish for the stock over the summer. That’s not something I usually look for in my technical analysis, but that big past performance is undeniable.

All the signs point to a situation where NewHydrogen stock could be setting up for a “carbon copy” of the scorching late-summer run that sent it around 85% higher.

Given its extremely low price right now, below $0.03, I think it makes sense to give this small stock plenty of room to run here. Buy this stock up to $0.03, and add a 7% trailing stop to protect your principal and your profits. Rather than pull the ripcord at $0.035 or $0.04, let this one go up to a nickel, or $0.05, before reevaluating.

There are a ton of small stocks out there, far beyond the clean energy sector. Take the new field of psychedelics, for instance. I know of 23 stocks (you read that right: twenty-three), each one trading for under $5 a share, with the potential to 1,000X over the next year. I think this sector is on the way to becoming a $400 billion giant, and, for the moment, you don’t have to be a millionaire to get in. Take a look at the details here.