Sono Motors stock goes public soon. The company trades on the Nasdaq under the ticker SEV for between $14 and $16 per share. The electric vehicle (EV) stock will be available through Robinhood IPO Access, which means some investors will get a chance to own shares before this stock hits the exchanges. 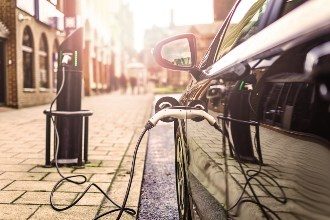 We're going to show you whether that's a good idea or not.

This IPO comes hot on the heels of Rivian's successful launch and looks to capitalize on the hype around EV stocks. At the high end of the 10 million shares offered, Sono Motors could hit a valuation of $1.1 billion.

So, should you buy shares of Sono Motors stock amid the EV hype? Let's find out...

What Is Sono Motors?

Founded in 2016, Sono Motors is an automaker based in Munich, Germany, that focuses on developing solar-powered electric vehicles.

While solar-powered vehicles are nothing new - both Hyundai and Toyota offer vehicles that blend electric and solar - Sono Motors intends to add to the competition with its Sion model.

The Sion can also be charged via charger and run 190 miles on one full battery. While this is low compared to the typical range of 300 miles per charge, Sono Motors' Sion is priced much lower at $32,650 compared to $40,690 for Tesla's Model 3.

But what sets Sono Motors apart from other EVs on the market now is the ability to integrate solar panels into the vehicle. This is where the Sion shines. When the car's solar-powered system is in use, it can add just over 69 miles on average per week. At most, it can top out at 152 extra miles per week.

While this helps the company to expand further than just its own EV sales, it doesn't mean that it's worth investing in. To get a better idea, let's look at Sono Motors' balance sheet...

As of right now, the company has "no relevant revenue." Which is to say that it's not profitable at this time. The company is still in pre-production mode, so it isn't currently generating regular revenue.

In fact, Sono Motors lost $29 million in the first six months of 2021. And since the company's founding back in 2016, Sono Motors has accumulated a deficit of more than $120 million.

Sono Motors is hoping to turn things around though.

The company's first EV, Sion, has 16,000 reservations, each with a down payment of about $3,000. That's brought in at least $48 million for the EV company. Those reservations should start to be filled by 2023.

Here's why we're taking that with a grain of salt: Back in 2018, Sono Motors had 7,000 reservations. Customers were told they'd have their cars in early 2019, but that was then postponed until 2021.

Now, if this 2023 deadline gets pushed further back and customers want to cancel their reservation and get a refund, they can if Sono Motors hasn't spent the money on the production of the vehicles.

Sono Motors plans to outsource production to National Electric Vehicle Sweden (NEVS). The trouble is, NEVS is owned by the Chinese firm Evergrande. This is the same Evergrande that's more than $300 billion in debt and threatening the global economy.

Why to Avoid Sono Motors Stock

It's best to avoid this company after the IPO. Right now, all the attention and hype in the EV space is sending EV IPOs through the roof. Consider the fact that Rivian is somehow more valuable than Ford or GM despite not having delivered a single vehicle yet.

That's one more reason investors should take a "wait and see" approach with these hype beasts. Especially when it comes to Sonos Motor...

The company expects to raise roughly $135 million from the IPO. But even that isn't enough to move the company's EVs into production. Just to get the production off the ground, Sono Motors needs at least $410 million. So, it will have to figure out where to make up that $275 million deficit after the IPO just to meet current production needs.

The other issue is that solar-powered cars of this era will not be able to power themselves. While Sono Motors Sion is able to stretch the battery life, owners will still have to pull off to recharge the battery. There's not a huge payoff, especially when, say, Tesla's Model 3 estimated mileage is 358, far better than what the Sion offers.

So, with this one, take the "wait and see" approach until Sono Motors delivers the first round of vehicles in 2023.

Will This Be the Nasdaq's Biggest Winner of 2021?

This tiny EV stock is on a roll. After dominating the foreign exchanges, it's primed to be one of the biggest - if not the biggest - winners on the Nasdaq.

Now one of the biggest oil companies in the world is throwing everything it's got into this new startup before it goes public.

Strongly disagree with the sentiments shared..This is first of its kind. SONO Motors is going to be a hit. Their booking continue to increase amid interest.