Well, that's what we're going to find out today. 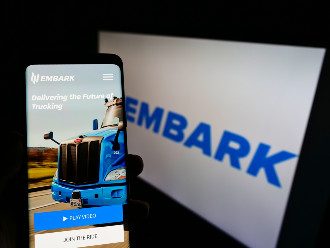 You see, as an autonomous trucking company, Embark Technology has a unique opportunity in today's environment.

Over the next five years, roughly $750 billion will be spent on autonomous vehicles (AV). And between the current congestion in U.S. ports, the shortage of truck drivers disrupting supply chains, and an increase in e-commerce, Embark is in a position of growth.

So, how will Embark fare as companies look to autonomous trucking for a solution to supply chain issues?

What Is Embark Technology?

Founded in 2016, Embark is a Software-as-Service (SaS) company that focuses on the self-driving software and support tech for AVs in the trucking industry.

The company's goal is to help truck drivers spend less time actually driving. This, in turn, allows for more deliveries per day by boosting efficiency through their automated driver software. The software assists the truck driver while cruising down the highway, making it a mostly thoughtless task for the driver, letting the driver take over when taking an exit.

Unlike Waymo, another AV startup that builds its own vehicles, Embark works with carriers and truck manufacturers to integrate AV tech into trucks. With Embark Universal Interface, self-serving components with a flexible interface, most major truck companies can easily integrate Embark's technology into current vehicle platforms. This saves on the cost of production and allows them to more quickly introduce clients to the software.

And Embark has partnered tech companies like Cummins Inc., NVIDIA, Luminar, and ZF to speed up the integration of the Embark Universal Interface within original equipment manufacturer (OEM) vehicle platforms.

Collectively, the company has integrated the software in over 35,000 trucks across various fleets for big-time shippers and carriers across the nation. The company's autonomous trucks improve overall fuel efficiency by 10%, reduce the delivery time by 40%, and increases the revenue per truck by a whopping 300%, which helps to create more sustainable supply chains.

A Solution to the Supply Chain Disruption

The shortage of truck drivers is hitting the supply chain hard. More than 70% of domestic cargo ships via trucks. Between the rise in e-commerce and the slow emergence from the pandemic, many trucking companies can't hire enough drivers to meet to demand.

One of the largest trade bodies, the American Trucking Associations, estimates the industry needs about 80,000 to keep the supply chain moving. That's an increase from the pre-pandemic estimates of 61,500 drivers.

And while fully driverless trucks are a long way off still, Embark's autonomous trucking allows for less experienced drivers get behind the wheel with less training. The technology is more of a co-pilot rather than an outright driver.

Embark has announced partnerships with AB InBev, owners of Budweiser, Werner Enterprises, a truck company for retail stores, Ryder and DHL, among others, as more companies look for ways to reduce supply chain issues and maximize company profits.

Walmart announced recently that the company will use fully autonomous trucking for online grocery orders through Gatik. While this doesn't directly benefit Embark, it shows how big companies are making the shift toward AVs.

So, is Embark stock worth buying?

It's best to wait and see where this stock moves. Right now, Embark stock is down almost 14% since it went public via SPAC.

The big reason is that Embark has yet to generate any revenue, and it lost about $21.5 million last year. It's hard to invest in a company that hasn't proven itself yet. And it doesn't help that the company is operating on a deficit, with an operating cash flow in the red of $39.68 million.

But it isn't all bad for this AV stock.

Embark does have real potential as the AV market continues to evolve and grow - and it will continue to do so. It's all new tech that major tech companies like Nvidia are investing heavily into.

The more they invest in the research and development, the sooner that fully autonomous vehicles will hit the roads. When that does happen, Embark could become a top competitor. In fact, the company expects to earn $867 million in revenue by the end of 2024, and $2.8 billion in 2025.

Those are some pretty promising numbers, if the company can actually hit them.