A whole new range of DeFi platforms popped up in 2020, from lending services to decentralized exchanges. And a large portion of this ecosystem was built on the Ethereum blockchain.

The Ren (REN) cryptocurrency wants to offer a solution. In fact, Ren crypto is one of the few noteworthy projects designed to connect different blockchains. 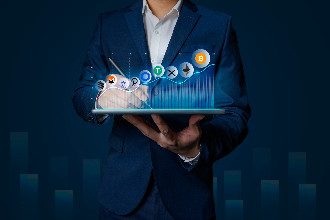 You see, the Ethereum blockchain has its limitations. Billions of dollars invested in other blockchains can't be invested in Ethereum-based projects. But that's exactly what Ren (REN) is aiming to change.

This versatility has become a driving factor in the crypto market as it evolves to become more interconnected.

Let's take a look at why REN token shot up 27% last week - and where it's going over the next few years.

What they created was a bridge between many blockchains without having to trust someone with your funds.

Ren is more versatile than the standard blockchain bridge, which is used specially for blockchains that already have smart contracts and the inherent ability to create tokens on their network.

Bitcoin, for instance, doesn't have smart contracts, so it can't be moved to the Ethereum or Solana networks using a standard blockchain bridge.

Ren, on the other hand, works as a bridge between two cryptocurrencies to bring a coin without smart contracts to another coin's network that has smart contracts. It does this through a special piece of technology called the Ren Virtual Machine, or RenVM.

RenVM is designed to accept a true Bitcoin and churn it out as an Ethereum Token that is a representation of that Bitcoin (RenBTC). This way, that Bitcoin on the Ethereum network maintains the same value.

At any point, you can give your RenBTC back to the RenVM, and it will give back your true Bitcoin.

That Ethereum token you received through the RenVM is just a representation of a true Bitcoin, redeemable at any time.

RenVM is operated by a network full of DarkNodes, similar to Bitcoin miners that participate in the network to add security and confirm transactions.

They're called DarkNodes because the people running them can't see how much crypto is being converted in the VM, how much is validated, or where it's being sent.

It does this using Shamir's Secret Sharing Scheme. For how complex as it is, the result is simple.

Anyone can become a DarkNode as they use a proof of stake method. However, you need 1,000 REN tokens in order to be eligible.

The biggest current downfall to Ren is centralization. There are only about 2,000 DarkNodes online, and only a small portion of those DarkNodes do a large majority of the work.

But there is way more upside.

It's a trustless system. Rather than going through an exchange where you trust your investment won't be taken by the people running it AND you receive what you want, Ren is run by code.

This avoids problems just about every blockchain faces.

It's also looking into developing a form of insurance for tokens in the RenVM. This is a new idea in the volatile cryptocurrency space and could be a trendsetter among other similar protocols.

Now, let's take a look at what people are saying about the REN price in the future...

It bounced around the $1 range until the crypto market crashed in May, and it's slowly recovered since then to $0.71, where it sits today, up 37% this week from $0.47.

Two Stocks, One Crypto: The Metaverse

The Metaverse is creating a new world... from artificial intelligence to the Internet of Things, even cryptocurrencies and augmented reality.

The transition will take billions - $753 billion to be exact.

Three small players - two stocks and one crypto - are rumored to reap the heftiest rewards.

Each one is trading for less than $30. Click here to learn more.