The volatility of the cryptocurrency market is well known. It can be impossible to predict sometimes. 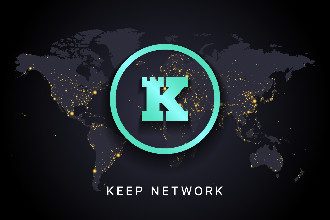 Keep Network (KEEP) caught the eye of crypto investors this week when the coin surged 12% on Monday. But one Keep Network price prediction shows 4,410% by 2031.

That volatility can swing both ways. Sometimes it's major gains in a short period, and other times it's a downward spiral.

For certain cryptocurrencies, though, it could be massive windfalls.

Let's take a look at the coin and why it could soar over the next few years.

What Is Keep Network?

In an era where data is a full-blown business, people are becoming increasingly uncomfortable online. Your every move is recorded and analyzed.

It's often sold to other companies and used to target you.

This targeting is often in the form of ads. If you've ever noticed ads for a product or service that you may have looked at online briefly but seem to follow your web browsing - that's the result of targeted ads pulled from your data.

And that's just the tip of the iceberg of data analysis.

Even most decentralized applications (dApps) running on public blockchains, like Ethereum, collect users' data to operate.

The Keep Network is looking to host a network where users won't have to worry about that.

It's a place for storing and encrypting private data on the public blockchain. It allows private data to be used on public protocols without sacrificing confidentiality.

This is eliminating the problem that holds back the adaptation of blockchain, and the network is helping developers build a completely decentralized app.

It claims to be the only protocol that is truly decentralized.

It does this using what it calls "Keeps."

Keeps are like containers that enable smart contracts to use and manage parts of stored data without exposing it to the public blockchain.

Computers that maintain keeps, or "keep providers," get fractions of private data through a system created for trustless randomization, also called beacon protocols.

The tBTC, or the Bitcoin Bridge on Ethereum, is the first app built on the Keep Network, and it allows users to use Bitcoin on the Ethereum network.

This was a huge development in the crypto world. tBTC is considered one of the first decentralized tokenized Bitcoins available on the Ethereum network. Not only does this add liquidity to the Ethereum blockchain, but it allows Bitcoin holders to benefit from DeFi projects.

How KEEP Helps the Network Operate

KEEP is the network's native token. To operate a keep, nodes stake KEEP to be selected by the network.

After that, keep provers are rewarded with KEEP tokens for maintaining keeps.

This motivates users to store their tokens within the network, and it's been working. User activity has gained traction and more than 21.2 million KEEP coins have been earned by stakes so far.

According to the network's records, 76k ETH has been bonded to back tBTC and earn KEEP as of Dec. 2, 2020. Today, that means the average stake is earning 16.7% on their ETH per month.

These rewards are fleeting. Originally, they were meant to incentivize volume through tBTC minting and build confidence in the bridge.

Now that the bridge has been battle tested and tBTC's supply cap has been lifted, the network is adjusting incentives for growth and clarity.

In November, the minimum amount of KEEP required to stake on the network was 90,000 tokens. However, that number is gradually decreasing, and it's estimated that by February it will be down closer to 10,000.

The token is secured and designed to prevent one user from creating multiple accounts in an attempt to gain more control over the network than other nodes. Between this Sybil resistance and its dividends, the Keep Network is a censor-resistant and permission-less protocol.

For those using the network for its privacy, KEEP tokens are what keeps their data private.

The bridging between Bitcoin and Ethereum was the first big step for Keep Network.

Connecting the two platforms and giving Bitcoin owners the opportunity to invest in dApps addresses two major concerns with blockchain: decentralization and privacy.

The process of transferring BTC to tBTC and back is resistant to external manipulation, so you can make these transfers either way with no intermediary involved.

A merger with another blockchain project with similar goals will also drive attention to the coin.

The merger is a milestone for the blockchain industry. It's the first time two competitive projects agreed to merge their protocols.

Matt Luongo, one of the founders and creators of Keep, said of the merger, "The Keep and NuCypher networks have built similar technology with similar goals. Rather than splitting the market, we think we can achieve more together."

Rather than competing against each other to achieve the same thing, they interconnected their protocols and will use a common blockchain infrastructure.

Factors like its merger and addition onto sites like CoinBase have helped drive the price, but let's see where it's expected to go in the future.

Digital Coin on the other hand is a bit bearish on the coin, giving it a more modest forecast. It expects the coin to end the year at $1.13, gaining steadily through 2029 to $3.56.