While there's still ongoing supply chain issues and semiconductor shortages, that may be remedied later this year. Still, it affects how you might invest when it comes to tech stocks because of how important semiconductors are to automakers. 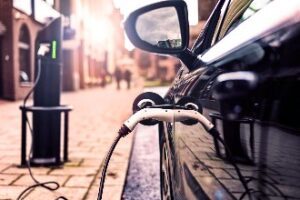 We've seen firsthand what that can do to car sales. Between chip shortages and shipping problems, car sales fell by 14.7% from 2019 to roughly 14.5 million units in 2020.

But the drop in car sales wasn't due to less demand.

Car manufacturers simply couldn't make enough because of the limited supply of chips. It's a situation that was difficult to imagine 10, even five years back.

But now, some long-time automakers are involved in making their own semiconductor chips to meet demand and to push their own tech forward to keep up with the newcomers.

So today, we're taking a look at some of the best EV stocks to buy right now - both old and new.

Ford Motor Co. (NYSE: F) is an 118-year-old company that's on track to be the first to have a road-ready electric truck. Its Ford F-150 "Lightning" pickup truck is due out spring 2022.

But the Lightning isn't Ford's only venture into the EV market. Ford also has the Mustang Mach-E, a crossover all-electric sport utility vehicle (SUV), the F-150 hybrid, and the Escape hybrid.

The company also invested $50 million in EV battery recycler Redwood Materials to help with the battery supply chain. Redwood's tech recovers 95% of the nickel, cobalt, lithium, and copper in dead batteries. This is huge since Ford aims to have about 40% of its sales come from EVs by 2030.

And Ford recently made a deal with semiconductor manufacturer Globalfoundries Inc. (Nasdaq: GFS) to help them produce semiconductors. Since cars of today can't fully function without chips, these chips play a central role in the design and production of EVs.

Lucid Group Inc. (NASDAQ: LCID) is flush with cash after its merger with Churchill Capital IV - over $6 billion. That should help push its production forward and help map out its first full year as an EV automaker.

If 2021 set the stage for Lucid's ability to create intuitive technology, engineering, and design, then 2022 is the year to focus on production.

Lucid plans to deliver 20,000 Lucid Airs by the year's end. It ceased reservations for its Dream Edition sedan and has shifted focus toward its Grand Touring, Touring, and Air trims. Lucid is also pushing to make progress on its Gravity SUV.

The EV automaker won't generate much in revenue for 2022, let alone turn a profit, since it takes years for companies to see a return, but what investors can watch out for is the number of reservations. Currently, that number is a solid 17,000.

Another upside to Lucid is that the company was successful in developing and delivering the Lucid Air on time - and with no complications. This supports the argument that Lucid is on track to be an EV stock with long-term growth potential.

There's no question that Tesla is the leader when it comes to EV sales, but China-based Nio Inc. (NYSE: NIO) is an established EV automaker that has some fantastic potential for growth. And 2022 could be the pivotal year for Nio.

Over the past two years, it's been growing its vehicle deliveries. While the EV automaker is much smaller, Nio increased deliveries in 2021 by 109%. Meanwhile, Tesla managed to grow by 87% over that same timeframe.

The company is pushing to expand production capacity, working alongside its state-owned manufacturing partner, to at least 20,000 electric vehicles per month by this spring.

And Nio is making the move into the European market.

Last year, the EV automaker started sales in Norway and established a full operation there, which includes Nio community meet-up spots. The company plans on developing charging and battery swap infrastructure there as well.

But Nio isn't stopping at Norway - over the next year the company wants in at Germany, the Netherlands, Sweden, and Denmark.

As if that wasn't enough, Nio has plans to release three new products in 2022 as well.

The ET7 luxury sedan and the smaller ET5 have already been announced, with the ET7 hitting the streets in March 2022 and the ET5 by September. And Nio is working on a partnership with BYD, China's biggest automaker, to develop an EV with mass-market appeal.

The way it's shaping up, 2022 could be Nio's year. The EV automaker is in a great position of growth - a position that could see shares of this tech stock move from $29.39 to more than $87 per share. At that kind of movement, shares of NIO stock could hand you almost 200% gains within the next 12 months.

And that's why NIO is one of the best EV stocks to buy right now.