Bitcoin (BTC) is the granddaddy of crypto, and it's arguably the most famous; people who don't even own crypto at least know what it is.

With the performance it's put in over the past few years, you'd have to be under a rock to miss it.

Bitcoin ignited the crypto-mining frenzy where, theoretically, anyone with enough computing power could solve for algorithms that result in coins. I mined Bitcoin myself for a few years. It was also the first "mega-coin" to utilize the decentralized Blockchain ledger.

For all these reasons and more, Bitcoin has soared from a couple of cents all the way past $68,000 in its lifespan, as more and more investors see the value.

Nowadays, I think the most explosive growth opportunities are in small, "third wave" coins Bitcoin and Ethereum paved the way for.

But when I see an opportunity to own Bitcoin for a cheaper price, you're damn right I'm jumping on it, and I'll tell you why - we're face to face with a super-critical technical level right now.

They Call This "BTFD"

Cost averaging, or "averaging in," or even just "buying the dip" is an investment strategy waaay older than cryptocurrency, but in a lot of ways, it's the perfect way to approach an asset like Bitcoin.

It's simple: Buying dips means you're lowering the overall cost of your position over time. Some crypto enthusiasts are fanatical about the strategy - "BTFD" or "buy the ****ing dip," they say.

At the same time, you can be assured the "dips" will become less and less frequent the more mainstream Bitcoin and other cryptos become.

Back in ancient times - eight or nine years ago - mining and trading Bitcoin was really a fringe market. But increasingly, BTC has become mainstream, with major institutional investors now embracing it.

Mr. Dalio famously called Bitcoin and other coins a bubble waiting to pop and disappear, but he recently changed his tune, stating he has made investments as a regular percentage of his own personal assets.

And nowadays we don't even have to own Bitcoin to cash in on it; we can trade futures contracts in U.S. and global markets, own an ETF with synthetic Bitcoin positions, or, if we look in other countries, play ETFs that directly hold the stuff. These are very active, liquid investments that go a long way toward proving out the claim that Bitcoin and crypto are breaking into the mainstream.

Some folks are out there talking about Bitcoin replacing gold - talk that crops up whenever inflation does. I don't necessarily buy that one, though it's undeniable Bitcoin has done better than gold.

Look at this comparison chart of the Bloomberg Bitcoin Index vs. spot gold since January 2020:

Over the past two years alone - as the economy has gone through the COVID-19 wringer and inflation has soared to multi-decade highs - Bitcoin has gained 474.62%, compared with gold at 14.27%.

But, coming to my point, Bitcoin has recently pulled back from its November 2021 highs. The way I see it, this drop to and consolidation around a key Fibonacci retracement level (Fibo) could point to an opportune entry point for this megacoin.

I shared this chart with my Microcurrency Trader readers the other day. 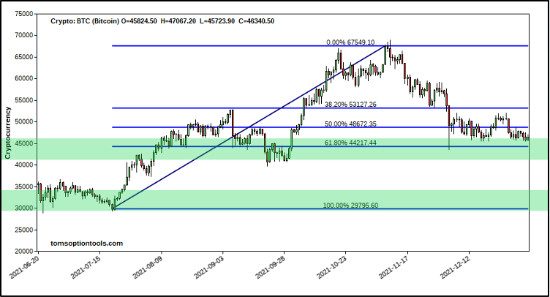 I gave them specific entry and profit targets earlier this week, as well as a potential level of resistance to beware of and the must-hold support levels for the cryptocurrency.

Now, owning Bitcoin at this point is a little like owning a mega-cap stock like Amazon.com Inc. (NASDAQ: AMZN) - you're not buying this for quadruple-digit profit potential, especially in the near term. You're buying it because it's fundamental, and it gets you an important position in the new economy - and at a discount.

Like I said earlier, I think the serious profit potential is going to come from the "third wave" cryptos we talk about in Microcurrency Trader all the time. I've got one coin "locked and loaded" right now. It costs just $3 or so, but I think it's going to be a massive driver in a projected $1 trillion wealth wave coming over the next 12 months. Let me fill you in...