Last week, Microsoft Corp. (NASDAQ: MSFT) announced plans to buy up Activision Blizzard Inc. (NASDAQ: ATVI), one of the largest video game publishers, for $68.7 billion. While the news shook the gaming industry, most of the reporting focused on the metaverse. 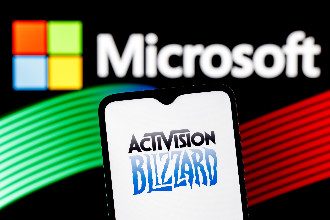 But the Microsoft-Activision deal goes well beyond the metaverse. It cements the tech giant as a top contender in the $175 billion gaming industry and will push Microsoft stock higher in the years to come.

The pandemic pushed the popularity of video games across the board from consoles to smartphones. And tech companies continue to look for an in on the industry, like Netflix's game streaming service, to get a slice of the 3 billion gamers worldwide.

If the deal goes through, Microsoft will have more than 30 internal gaming studios, along with publishing and esports production capabilities, at the company's disposal. It's set to be the third-largest company in terms of revenue - and will have more opportunity to draw in a larger swath of those 3 billion gamers.

This puts Microsoft stock, one of Money Morning Chief Investment Strategist Shah Gilani's favorite companies and stocks, in a prime position to grow. And in a volatile market, Microsoft's a stalwart.

Speaking of market volatility, today at 7 p.m. EST, Shah is going live. In his Emergency State of the Markets Address, Shah will talk about how the "mother of all hyperdrives" will affect the markets, the economy, and your portfolio.

Don't miss out on this - click here to RSVP for the event.

Back to the Microsoft-Activision deal... the tech giant is framing it around the metaverse, that burgeoning online realm that blends virtual and augmented reality - but it's much more than that.

While the metaverse is an area that's attracted a massive amount of talent - and investing - it has yet to become a reality. Much of it is speculation and hearsay until development becomes more substantial.

The real (and more immediate) benefit of this deal is where it places Microsoft in the video game industry.

But before we get into the details, let's briefly look at how this deal came to be...

Microsoft might be getting a premium with Activision, but that's because of countless sexual harassment and discrimination charges, which weighed down the share price by 27%.

Early on, when these issues first surfaced to the public, a California employment agency sued Activision over accusations of fostering a toxic workplace culture that targeted women for sexual harassment and discrimination.

Months later, employees started to strike and called for executives like Bobby Kotick, chief executive at Activision, to step down. While some like J. Allen Brack, head of the Blizzard division, did step down, Kotick ignored employee demands.

Then back in November, The Wall Street Journal reported that Kotick knew about the issues for years but had not taken any action. After the news broke, the calls for his resignation only grew louder after the news.

Despite all that noise, Microsoft agreed to pay $95 per share of Activision to shareholders - 45% higher than the share price at the time of the deal. The tech giant also said that it would allow Kotick to remain in his position while the deal is worked out, and there have been whispers about him moving more into an advisory role.

While Microsoft would be smart to cut ties with Kotick and start this venture off in a fresh direction after all the negative attention, only time will tell.

At the end of the day, the deal does more good for Microsoft than bad, particularly when it comes to the video game industry. The deal moves the company that much closer to its rival Sony, and puts it way ahead of newcomers to the industry like Amazon and Google.

In fact, Microsoft's gaming revenue had increased 33% year over year in fiscal 2021 - adding $3.8 billion to the company's top line. This beat out the company's overall revenue growth of 18% for the year.

In the fourth quarter, gaming revenue rose by 11% to $3.7 billion. That's in part due to higher sales of its latest Xbox console - up more than 160%. And the gaming side of the business made up 8% of Microsoft's overall revenue in the fourth quarter.

It won't be a surprise to see the gaming side of business play a larger role in the company's future. Phil Spencer, chief executive of Microsoft's gaming business, believes that: "gaming will be at the forefront of making that [metaverse] mainstream."

More immediately though, the deal lets Microsoft gain a stronghold on the $173.7 billion mobile gaming industry - a space that the tech giant was mostly absent from.

So, where does all this leave Microsoft stock? In a great position, all at a discount.

The company's financials are in great shape. Outside of gaming and the metaverse, Microsoft also has Azure, the second-largest cloud system behind AWS, to help push the stock higher.

And Shah sees Microsoft as a "fortress stock" that will help guard your portfolio in rough market conditions. And right now, it's trading at roughly $300.72 per share - a discount of almost $50 per share from its all-time high.

If you have $100 to invest today, this is where you want to put your money to work.