It doesn't matter whether you're new to cryptocurrencies or not - the number of potential investments can be overwhelming. While Bitcoin (BTC) is often the first to come to mind, it is more akin to gold. It's stable; it's a gauge of overall value. 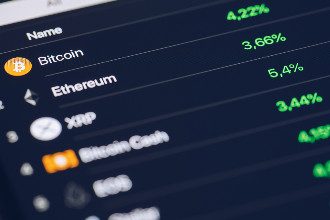 But there are certain tokens that Money Morning crypto expert Nick Black believes should be in every investor's portfolio - and today we're here talking about three of the best wealth-generating cryptos.

When it comes to the portion of your portfolio that's going to generate wealth, you'll need to balance it out with "protocol layer cryptos." Without getting into the weeds, these are tokens that make up the roads, highways, bridges - you name it - that connect the entire crypto space.

That means that these allow you the chance to own a slice of the infrastructure of the future. And while the range of tokens that are considered protocol later cryptos is still fairly wide, there are those that stand out among the rest.

So, let's dive into the three best cryptos to buy right now...

Created by a Massachusetts Institute of Technology (MIT) professor, Silvia Micali, Algorand (ALGO) is a crypto that really utilizes proof of stake validation and creation. That means it works better by only owners of the crypto within the network.

Of course, for cryptos to hit their full potential, they have to be able to talk to one another. This is known as interoperability. And when it comes to Algorand, a change is underway.

Algorand offers the ability to create digital assets or smart contracts on the blockchain's Layer-1 network. A Layer-1 crypto is an actual blockchain, while a Layer-2 adds an operating model to increase the efficiency and scalability of the Layer-1 assets. And Algorand's network provides a network that allows fungible and non-fungible tokens (NFTs) from other blockchains to talk with each other.

They can build a variety of applications that work across different blockchains; this interoperability allows for a level of connectivity not offered by other blockchains. This gives Algorand a leg up on the competition - and puts its native token ALGO in a great spot moving forward.

Cosmos (ATOM) is another crypto that looks to create faster and cheaper decentralized applications - anything from a non-fungible token (NFT) marketplace to decentralized exchanges - by allowing them to run on their own dedicated blockchains.

But with Cosmos, those dedicated blockchains are not cut off from others. Users are not locked into just one specific blockchain thanks to the interoperability offered by the platform.

And Cosmos provides developers tools to create their own custom-tailored blockchains. Each new blockchain is interconnected via the Cosmos network. And that communication across blockchains is important.

It allows someone to use Bitcoin to pay for something within an application that runs on an Ethereum network.

Think of it like this... If you had Verizon and could only text within your phone provider, this limits your accessibility, and it can impact the number of users within the network since it cuts you off from family or friends who have AT&T or T-Mobile.

While it isn't likely to be a game-changer, it is a fast, clean, simple-to-use blockchain that's garnering a lot of positive attention.

And it's made even cheaper thanks to the recent pullback.

The reason why Cardano (ADA) has the greatest chance at success is that it has little competition in the space it's investing into. The platform is targeting countries - Africa, South Asia, etc. - that have been left behind, so to speak, and tend to have limited access to digital identities.

Its blockchain network allows for the safe storage of information for a variety of uses, like banking or uses in agriculture to trace the origin and quality of products. It can even be used in the medical field to make it more difficult to counterfeit medications by tracking the origins of pharmaceuticals.

That gives Cardano high real-world utility, unlike most other blockchain networks. And no one else is challenging Cardano on this front; it's onboarding entire countries rather than individual consumers in an open field.

Even if the team behind Cardano only managed to bring on 5% of their total addressable market (TAM), the native ADA token could easily jump by 50X, if not more.

While Cardano might be down from its all-time high of $3.10, Nick Black doesn't see any reason to be concerned about this dip.