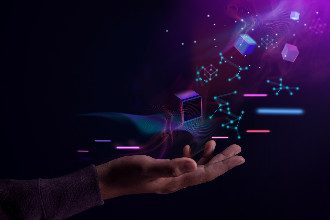 Web3 - or web 3.0 - has moved into the spotlight in recent years. It's become a buzzword in many conversations about the future of tech. Chances are you've heard of it at some point since it was first coined back in 2014 by Gavin Wood, the co-founder of Ethereum.

But what exactly is web3? Well, that's what we're here to talk about.

In a way, web3 is a utopian dream - one that uses cryptocurrencies to unite online communities across the globe. It's a tech movement that's free from government oversight and Big Tech; blockchains aim to hand power to the people. And celebrities from Snoop Dogg to Paris Hilton have jumped in on this growing phenomenon.

Web3 isn't just a cultural movement - there's a lot of money within the space.

Cryptos, specifically, have already made countless millionaires. Those who jumped in early enough even became billionaires. Since those early days, the crypto market has skyrocketed to $1.7 trillion - a jump from $10 billion back in 2014.

And right now, we are still in the early stages of Web3. Though tech still has some wrinkles to iron out, talent and capital is flocking into the industry.

Once those issues are fixed, crypto (and web3) could disrupt trillion-dollar industries - and you could see a new generation of wealth.

Why Does Web3 Matter?

Web3 is the next iteration of online connectivity that seeks to remove the middlemen from the equation. That means the web users would no longer be tied to Facebook, Google, or Twitter to access particular databases and products.

If you were to lay it out on a timeline, it'd go something like this...

The first iteration of online connectivity, otherwise known as web1, was the Internet of the 90s. Back then, the connective systems were in place, but it was a mess - most websites were clunky and too overwhelming to navigate.

By the mid-2000s, web2 happened. The rise of Big Tech - Google, Facebook, Twitter, etc. - sought to organize and tame the wildness of web1. This led to those companies to amass their wealth and (what some consider too much) power. They had, and still do have, a stronghold on the industry and large control over how companies interact with users' data.

Now, we're seeing the rise of web3 - the iteration that seeks to take power from Big Tech and democratize it for the people.

And the main goal of web3 is the decentralization of apps so that the users are in control of their own data, which grants higher levels of online transparency rather than, for example, a company withholding information for money.

It sounds like a farfetched, even radical, idea - that's because it is. But this is where people want to see the tech industry move.

For web3 to be possible though, it needs blockchains. And blockchains need to have superior interoperability, which allows blockchains to talk to one another across different networks.

The way things work now, there's not much seamless connectivity between different websites.

Say you make a Twitter account and send out little tweets every now and again. During one of your tweet sessions, you get a targeted ad for a product that you're interested in. So, you go ahead and try to buy it, but are prompted to created a new account before you buy it.

This is where interoperability comes into play. With it, that whole process could be simplified to a single account to access various websites.

At least, that's the idea behind it. And there are quite a few cryptos that benefit from this ability to talk across networks...

Cosmos (ATOM): One Crypto That Benefits from the Rise of Web3

Cosmos (ATOM) is one of many, but it stands out as a blockchain that focuses on this one major flaw with cryptos and the need for blockchains to talk across networks.

This cross-communication makes it easier for developers to build new blockchains. The more blockchains built using Cosmos, the more utility those cryptos have, and in turn, the more valuable they become.

Money Morning Alternative Asset Specialist Nick Black views Cosmos as an "efficient, very elegant token." It's a solid platform that aims to help cryptos excel in one area, then work efficiently with other blockchains - it's why Cosmos was dubbed the "Internet of blockchain."

Cosmos' native token, ATOM, moved 425% higher in 2021. While it isn't likely to be an absolute game-changer, it is a fast, elegant, simple-to-use blockchain that's getting a lot of positive attention.

What does Nick Black think about Cosmos? "We like Cosmos... I think, safely, there's going to be a lot of future investments in Layer-1's [blockchains]."

So much so that Black has set a price target of $200 for ATOM in 2022. The blockchain is gaining in use - CosmoStation further opens up utility, making multiple wallets easy to access.