The Russia-Ukraine conflict might be driving oil prices higher, but that doesn't mean fossil fuels won't fizzle out as the world looks toward renewable energy to combat climate change. And the move away from fossil fuels to green alternatives might come sooner than originally anticipated. 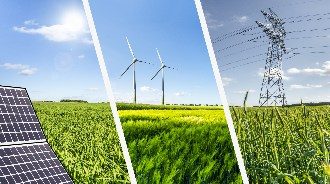 Consider the fact that the International Panel on Climate Change (IPCC), which is made up of experts brought together by the United Nations, recently released its report on the current state of the global climate crisis.

Without getting too into the weeds, the outlook of the report, written by 270 researchers from 67 countries, doesn't look good. It's even been deemed as "an atlas of human suffering and a damning indictment of failed climate leaderships" by António Guterres, the United Nations secretary general.

And that's without initiatives that've been long in the works, like President Joe Biden's Build Back Better Act - which invests hundreds of billions of dollars into clean and renewable energy investments and tax incentives. Though this bill has yet to make it out of the Senate, it's still a good indicator of the direction the United States is heading.

There's even been an executive order signed by Biden that aims to boost the United States' renewable energy economy through sustainability efforts at the federal level - there's a pledge by the White House to ensure the government will have "net-zero emissions from overall federal operations by 2050."

And the green movement isn't isolated to the United States. According to the International Energy Association (IEA), renewable energy is expected to make up more than nearly 95% of total global power capacity by 2026.

In Deloitte's 2022 Renewable Energy Outlook, the company says: "Renewable energy growth is poised to accelerate in 2022, as concern for climate change and support for environmental, sustainability, and governance considerations grow and demand for cleaner energy sources from most market segments accelerates."

Alongside the IPCC's grim report, it's safe to say that renewable energy is the place to be as we move through 2022 and beyond.

NextEra Energy Inc. (NYSE: NEE) is massive. The company tops out with a whopping $147.6 billion market cap, making it one of the largest utility companies in the world - with a hand in renewable energy, too.

Aside from fossil fuels, which the company does deal within, NextEra generates electricity for customers via solar, nuclear, and wind. Recently, NEE filed a proposal to further shrink the environmental impacts of energy by providing offshore wind energy to New Jersey - all while making it cost-effective for citizens.

And that's not the only renewable energy project under the company's belt.

NextEra currently has a large backlog of renewable energy projects - and there are no signs of slowing down. The number of projects has climbed higher every quarter, which is aiding the company's mission to reduce emissions. The merge between Gulf Power and FPL strengthens NEE's position in Florida, along with expanding its customer volume every quarter.

Daniel Ford and Ross Fowler, analysts at the investment firm UBS, said that they "believe the total capital expenditure opportunity is in the 10-figure range." And Angus Kelleher-Ferguson, an analyst for Argus, sees NextEra as "a leader in renewable investments."

Analysts like Ford, Fowler, and Kelleher-Ferguson, among others, see NextEra hitting a price target of $93 - that's almost an 18% increase from NEE stock's current value is at today.

That might not sound all that impressive. But NextEra is a company that is on course for very solid growth over the long term.

Ameresco Inc. (NYSE: AMRC) is a company that offers both renewable energy products and services.

As of the close of 2020, Ameresco owned and operated 130 renewable energy plants and solar-powered installations. On the utility service side of the business, Ameresco's systems serve just about everything - ranging from airports to the federal government, healthcare, schools, and even public housing.

Not to mention AMRC's move into utility-scale battery storage solutions lends itself to a great long-term growth opportunity.

The company will reap the benefits as the shift toward clean, renewable energy happens across a variety of infrastructure. Even with the Build Back Better bill in a state of uncertainty, AMCR is in a position to perform well, thanks in part to Biden's executive order he signed back in December.

That makes the long-term potential for Ameresco very promising. In fact, analysts at CNN slapped a $90 price target on AMRC for the next 12 months. That means if you were to invest in AMRC today, this renewable energy stock could hand you modest returns of up to 42%.