The world is bound to change as we move into the phase of the economy that fully utilizes cryptocurrencies and blockchain technology. Investors willing to take a risk with this emergent tech are beginning to reap the rewards - more and more, there are cryptos with real-world applications. 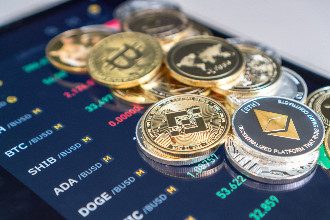 In short, the mass adoption of cryptocurrencies is happening now.

The Russia-Ukraine conflict put cryptos front and center as digital currency becomes central to funding its defense. President Biden is pushing for the United States to be a leader in digital asset technology (think cryptos and blockchains) with a recent executive order.

And last week, U.S. Secretary of the Treasury Janet Yellen acknowledged the benefits of cryptos. She stated that the Treasury wants to provide guidance for future regulation that supports the innovation of cryptos and blockchains.

Yellen still has concerns over cryptos' financial stability, consumer and investor protection, security, and any potential use in illicit transactions.

The point is that this is a huge potential step forward for blockchains and cryptos. Now more than ever, Money Morning Alternative Asset Specialist Nick Black sees incredible gains over the horizon within the crypto sphere.

But with more than 18,000 coins listed on CoinMarketCap.com, how do you know which will help shape the future of this new world?

Today, we're highlighting three cryptos with real-world applications shaping the future - cryptos that could offer huge payoffs for those who see their potential.

Ethereum (ETH) has thousands of networks supported by its blockchain, making it the largest ecosystem of cryptocurrencies. The decentralized software platform enables smart contracts and decentralized applications (dApps) to be built and run without downtime, fraud, control, or interference from a third party.

Its blockchain-based network has a variety of uses across the tech world, especially when it comes to gaming, music, entertainment, and decentralized finance (DeFi). That utility has made it one of the most popular and widely used cryptos to date.

To give you some perspective on Ethereum's capabilities, think about this: In 2020, PayPal handled nearly $1 trillion worth of transactions - Ethereum did the same in just 17 days. And Ether, Ethereum's native token launched back in 2015, is now the second-largest digital currency by market capitalization after Bitcoin.

We're already seeing the effects of Ethereum's blockchains by providing new ways to transfer property, cash, debt, and equity. They're even being used to help create safe and secure worlds within the metaverse.

Ethereum Triple Halving is a game-changer in the crypto market because of its proof-of-stake (PoS) capabilities. For those unfamiliar, PoS allows users to "stake" their tokens - in this case, ETH - to the network. This helps secure the network and transactions that occur. Those who do stake earn some kind of "interest" with the network's native token.

With Ethereum, this move will introduce to the blockchain world a new way of mining that's cost-effective and more apt to resolve any concerns about the environmental impact of crypto mining.

It's easy to see how Ethereum is creating a foundation for the future of blockchains to be built on.

Created by Gavin Wood, one of the founders of Ethereum, Polkadot (DOT) is a crypto that's often associated with economic dependability. This crypto's blockchain network offers incredible scalability for standalone blockchains and interoperability, one of the necessary components for blockchains to talk to one another across networks - more on that in a minute.

What makes Polkadot stand out though is its blockchain network's ability to connect blockchains together, enabling users to build a blockchain with its Substrate framework. It also offers the ability to host blockchains, handling their security and transactions, and acts as a bridge for blockchains on Polkadot with other networks such as Ethereum and Bitcoin.

The platform has been developed as a mix of blockchains called parachains.

Imagine a group of polka dots, with each dot representing a single blockchain independent of all other blockchains because they can't connect with each other on their own. Polkadot serves as the connection between these blockchains to create a secure network where cryptos like Ethereum and Cardano can easily share data.

Polkadot's innovative and secure platform has created something called a Layer-0 function. And Layer-0 is, more or less, a road that connects all cryptos to develop a broader crypto ecosystem.

This makes creating and using a blockchain way more accessible than ever before, allowing the tech within the crypto sphere to advance even further in the near future.

It should come as no surprise that Cardano (ADA) comes in as one of the best cryptos with real-world applications. It's a darling among crypto investors and is celebrated for its massive return potential.

In fact, it's still one of Nick Black's favorite cryptos right now.

Founded back in 2015 by Charles Hoskinson, another co-founder of Ethereum, Cardano is a blockchain platform designed to challenge Ethereum's high fees. This is achieved with a PoS, decentralized network. It's also one of the first platforms developed using peer-reviewed research.

The Cardano team used this research as the backbone of its blockchain and performed extensive experimentation to find a winner, which is the platform we know today. The researchers involved in the platform's development have written over 120 papers on blockchain tech across various topics.

While Ethereum used the same proof-of-work (PoW) tech as Bitcoin (BTC), Cardano uses a more advanced version of transactions through PoS. You can stake your ADA tokens with Cardano for some accumulated interest - the reward rate currently sits at 3.75%.

With the recent addition of Ouroboros, Cardano can securely, sustainably, and ethically scale up to 4 million times the energy of Bitcoin. That's huge. It changes the efficiency and effectiveness of business transactions when it comes to real-world applications. And that puts Cardano in a position to play a massive role in creating NFTs (non-fungible tokens) and avatars within the burgeoning metaverse - an online industry that could be worth $800 billion by the end of 2024.

The metaverse might not fall into "real-world applications" per se, but that's just one side of Cardano's utility. It's also using its digital infrastructure tech to bring economic identity, empowerment, and financial inclusion to the entire continent of Africa.

Not only does Cardano offer the chance to land impressive gains for investors, but it also aims to empower those who don't have access to wealth creation with its network. In a way, it's a win-win crypto with plenty of real-world applications.

And the thing is... Cardano is far from done growing.

While Black can't predict the full impact of bringing an entire country into its network, it's a safe bet that the ramifications are enormous.