As the electric vehicle (EV) industry grows, there's going to be massive competition within the industry. This places pressure on the startups and stalwarts to design and produce vehicles that can keep up with - or push - the industry. And that can make it hard to sort out the winning EV stocks from the duds. 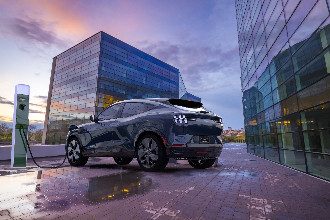 Once you do find a winning EV stock, it can present a massive, long-term growth opportunity in a global market that's expected to reach $1.3 trillion by 2028. While many investors tend to look at the new kids on the block, they tend to be volatile investments.

That's why you should never believe that an old dog can't learn new tricks.

Ford Restructured into a Forward-Looking Company

This 118-year-old company has produced the first to have a road-ready electric truck with the Ford F-150 "Lightning" pickup truck. But the Lightning isn't Ford's only venture into the EV market.

Ford also has the Mustang Mach-E, a crossover all-electric sport utility vehicle (SUV), the F-150 hybrid, the Escape hybrid, and the popular Ford Maverick, a hybrid-standard compact truck for those looking for something a bit smaller and more affordable than the F-150 version.

Outside of the company's production of EVs, Ford also invested $50 million in EV battery recycler Redwood Materials back in 2021 to help with its battery supply chain. Redwood's tech allows for the recovery of up to 95% of the nickel, cobalt, lithium, and copper in dead batteries.

Ford's also turned to SK Innovation to improve on its EV battery and build batteries of 140 GWh in capacity by 2030 for the U.S. market. The automaker also has plans for 100 GWh of capacity from Europe and China.

This is huge since Ford aims to produce more than 2 million electric vehicles annually and generate a 10% profit by 2026. While this is a substantial increase over the company's current operations, it goes to show where Ford's priorities are when looking ahead.

This restructuring can help Ford better recruit and retain the talent to push each business sector forward, all while leveraging tax incentives to help finance its EV expansion.

And to help cool the increased demand for semiconductors, Ford made a deal with semiconductor manufacturer Globalfoundries Inc. (NASDAQ: GFS) to help produce their chips. Since cars of today can't fully function without them, these chips play a central role in the design and production of EVs.

Ford might've delivered an underwhelming first-quarter sales report for 2022, but that doesn't mean you should rule the automaker out. If anything, Ford stock being down means that you're getting into this long-term play at a 30% discount.

As Ford continues to build out and develop its EV side of the business, it will build momentum in the second quarter and beyond.

Especially so when you consider the fact that Ford has been building up its inventory to account for any supply chain disruptions. The automaker last reported that inventory in transit rose 73.5% from February, and that includes a 127% boost for the F-Series line - such as the F-150 Lightning.

The automotive supply chain remains tight and semiconductors' struggles considered, Ford seems to have learned from past mistakes and doing whatever the company can to avoid repeats. Overall, this puts them in a more favorable position over the next 12 months.

Analysts over at CNN set a price prediction of $32 per share for Ford stock. If you were to invest in the automaker today, that could hand you potential gains of more than 120%.