Everybody likes to get free stuff, and folks who own Cardano (ADA) - one of our top picks - have access to a veritable river of free cryptocurrencies in the form of airdrops.

Airdrops are a method of getting cryptocurrency for free if you meet some sort of criteria. They're used as way to get the tokens of new projects into the hands of as many users as possible - in other words, a tool to accelerate adoption.

While Cardano has been around since 2017, it wasn't until last September that an upgrade enabled smart contracts on the platform. Because of that, we're seeing more developers starting to build on it just as they have done with Ethereum. The airdrops are coming from the explosion of new Cardano-based projects.

I'm going to tell you where and how to get these Cardano airdrops, but keep in mind that Cardano's ecosystem is just an infant compared to Ethereum's.

This means that you can collect a ton of Cardano-based tokens right now, but for the time being, they have very little value and are nearly impossible to trade for other cryptocurrencies. And every time you make a withdrawal, it will cost you a couple of ADA (though with ADA trading at a bit over $0.80, that's less than $2 a pop).

While there are no guarantees in crypto, Cardano is a prime candidate to evolve into a formidable Ethereum rival. It doesn't need to be an "Ethereum Killer" to succeed, either. Cardano just needs to capture a slice of the smart-contract economy that Ethereum has pioneered.

The idea is to scoop up as many of these airdrops as you can and then sit back and wait. Even if only one or two become valuable, you'll be way ahead.

It's a lot like being a venture capitalist. You invest in many promising startups knowing that most will fail. But the few that flourish pay off in a big way.

Now, let's go get some airdrops...

The site where you get your Cardano airdrops is called DripDropz.io. A group of people who were working on Cardano-based projects set up the site as a central hub to promote their projects.

Just go to the site and click on the "Register" button in the sidebar. The information required to register includes your name, email, and a password. 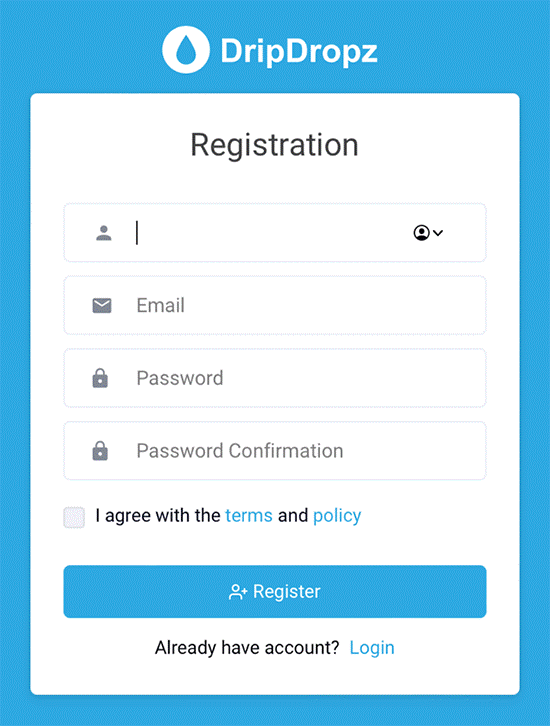 In order to qualify for the airdrops on DripDropz, you must have your ADA stored in a Cardano wallet and staked. That means you can't have your ADA on an exchange.

Cardano wallets include Yoroi, Nami, and Daedalus, which is the official Cardano wallet created and maintained by the Cardano project. These wallets can store the airdropped tokens you receive.

If you don't own any Cardano, it's easy to buy. It's offered on all major cryptocurrency exchanges. However, you'll still need to transfer your ADA to a Cardano wallet to get the airdrops.

To get set up to collect airdrops, click on the "Drip it" option in the sidebar on the DripDropz page. Just copy your ADA receiving address from your Cardano wallet and paste it into the space provided.

That's it! You're ready to get some airdrops.

Next, click on the blue "Check My Dropz" button. That will bring up information describing how much ADA you have staked as well as the staking pool you're using.

Below that, you'll see all the tokens you can now claim as an airdrop. There are options for filtering tokens by name or category. Then you'll see a section for newly listed tokens (if any). Usually, there are several.

Below that, you'll find the section for "All Other Tokens." Here is where you choose the airdrop tokens you want. You can select up to 10 different tokens per withdrawal you make. Just check the box for each one you want.

You'll notice that some projects are giving away many more tokens than others. You may get less than one token or millions of tokens. This has to do with tokenomics - the mechanics of token creation and distribution. The projects giving away high amounts have a very high supply, sometimes trillions of coins.

When you've selected the coins you want, scroll to the bottom of the page and select the "I agree with the terms and policy" button. Then click the blue "Claim My Dropz" button. 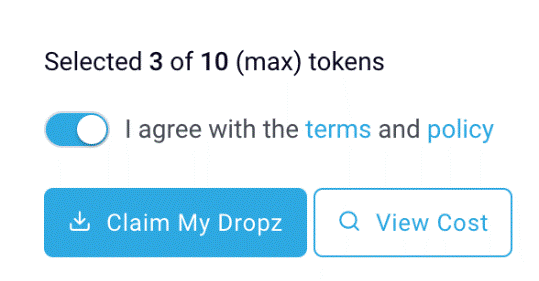 Here's the only catch, if you can call it that. To claim your airdrop tokens, you need to send a fee in ADA to the DripDropz site, between 3 ADA and 5 ADA, depending on how many tokens you claimed.

You have the option to use the "Copy Address" button on the page or scan the QR code on the screen to get the destination address. Click on the send option in your Cardano wallet and paste the address there.

Be sure to send the exact amount of ADA requested. Otherwise, your transaction will fail, and you will not receive your airdrop tokens. You will have six hours to send the payment.

When the transaction is finally confirmed, the airdrop tokens will appear in your Cardano wallet along with your refunded ADA.

Because there are usually way more than 10 tokens available (usually about 50), you have the option to go back and claim more if you want. But you will have to pay the ADA fee each time you claim.

While you theoretically could exhaust all the airdrop tokens you can claim in one sitting, that doesn't mean you can't claim more.

The DripDropz system is tied to the Cardano network's use of "epochs," each of which lasts five days. The epochs are part of Cardano's system for verifying transactions. They're also used to help govern the staking process. You get your staking rewards at the conclusion of each epoch.

On DripDropz, the arrival of a new epoch means everyone gets a new slate of airdrop tokens. So, if you visit at the start of each epoch, you'll be able to claim a bunch more tokens.

That's a new batch of airdrops every five days. You can see how that could add up to a lot of airdrop tokens over time. The more meticulous you are about visiting the DripDropz site for each epoch, the more tokens you'll accumulate.

Step 6: Which Tokens Should I Choose?

This isn't exactly a step - more like part of the process. But DripDropz offers you a lot of choices, and new tokens are showing up all the time.

Plus, each claim does cost you some ADA. So, you'll want to research your options so you can make the best choices.

As you look through the list of available tokens, you can click on any name to get more details about the project. There, you'll also find a brief description of the token and some data, such as the number of airdrop withdrawals it has had so far, as well as links to the project's website and social media accounts.

At the bottom, you'll see a list of special distribution qualifications based on which staking pool you use. Some projects dole out more tokens to members of certain staking pools. If you want to maximize your airdrops, check these out to see if the pool you're in entitles you to more tokens.

You can access info on all the Cardano-based tokens that have ever been offered on DripDropz by clicking the "Explore Projects" button in the sidebar. That brings up a full list organized by type (game tokens, meme tokens, governance tokens, etc.). Again, just click on the name to access more details on that token.

If you still crave more research data before you choose your airdrops, go to a website called CardanoAssets.com.

Cardano Assets gives you key data such as transaction volume, total supply, and price information taken from MuesliSwap (more on that in a minute).

Use of these resources will help you decide which airdrops to invest in.

For now, the airdrop tokens you get on DripDropz aren't traded on any major exchanges. And the truth is, most are worth so little at the moment that it probably would not be worth your while.

MuesliSwap is a Cardano-based DEX (decentralized exchange) where you can swap many of these new tokens. But again, the trivial value makes swapping a losing proposition.

When you try to do a swap, you can see the result before you execute the order. With the fees being about 2 ADA, and the value of the airdrop tokens you're getting way below 1 ADA, almost any swap results in a net loss.

And there's very little liquidity on the site - at least for now.

Using MuesliSwap also means more steps, such as adding a browser-based wallet that can link to the site. (MetaMask doesn't work because it's Ethereum-based; you need a Cardano-based one such as Nami, GeroWallet, or CCVault.)

However, as I noted previously, the Cardano ecosystem is really just getting started.

As time goes on, the prices of at least a few of these tokens will rise enough to be worth something. Successful tokens are more likely to get added to larger exchanges like Kraken and Coinbase.

MuesliSwap itself will grow along with the Cardano ecosystem, too - and it's possible MuesliSwap will someday become the Uniswap of the Cardano world.

So, crypto investors should consider stacking up those airdrops and sitting on them. If you wait a few years for the Cardano ecosystem to mature, you should be able to cash out with some handsome gains.

At Alternative Wealth Network, we specialize in finding the best crypto profit plays that everyone else is overlooking. Cardano is just one of many little-known, smaller coins that you can get for pennies on the dollar compared to Bitcoin or Ethereum, but nonetheless have the potential to beat the mainstream tokens many times over in proportional returns.

You can go here to learn how to access their complete model portfolio. Our panel of experts, including yours truly, has hand selected these recommendations for sheer profit potential. We're particularly excited about two small coins that could each soar more than 5,000% in the next five years. Take a look...