Despite the current crypto winter, most crypto experts - including me, to be sure - expect a rebound in prices followed by new all-time highs much, much higher than November 2021 highs of $69,000.

The increasing pace of global adoption is one of the main reasons folks like me are convinced those highs are possible.

Insider Intelligence estimated around 34 million U.S. adults owned crypto as of April 2022, and that's a big number, but adoption is accelerating all over the world - even places that will surprise you.

In a February report, the Wells Fargo Investment Institute said that crypto adoption was following the path of previous disruptive technologies, such as the internet.

"There is a point where adoption rates begin to rise and do not look back," the Wells Fargo report said. "Precise numbers aside, there is no doubt that global cryptocurrency adoption is rising, and could soon hit a hyper-inflection point."

This matters because adoption is one of the key components driving demand. And rising demand leads to higher prices. This is especially true of market leader Bitcoin, which also features a steady, predictable decline in the supply of freshly mined coins.

And as any first-year economics student can tell you, falling supply and rising demand results in higher prices.

In the case of Bitcoin, supply cannot increase in response to greater demand. The code that runs the network cuts the block reward in half (events known as "halvings") about every four years. Already the reward has been cut from 50 bitcoins per block mined to 6.25 now.

Meanwhile, adoption rose from just a few thousand users to more than 30 million.

And yet this trend is just starting to amp up now...

How Supply and Demand Will Make You Rich

To get an idea of where we're headed, let's take a look at a chart of the immediate past. 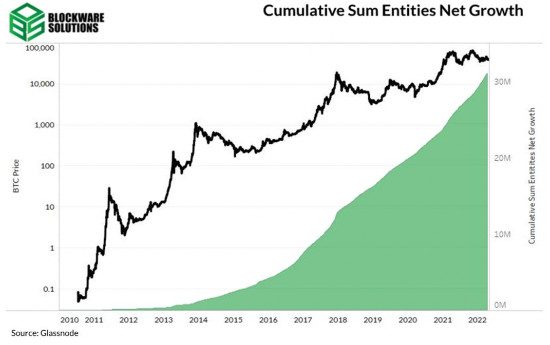 Here's a chart of the relationship between the Bitcoin price and user adoption growth that appeared in a recent report by Blockware Solutions:

The halvings will continue until 2140, when the last Bitcoin is mined. But global demand is poised to accelerate exponentially from here. Supply and demand will be moving in starkly opposite directions, putting incredible upward pressure on the Bitcoin price. And as we've seen over and over, the crypto markets consistently follow Bitcoin's lead. 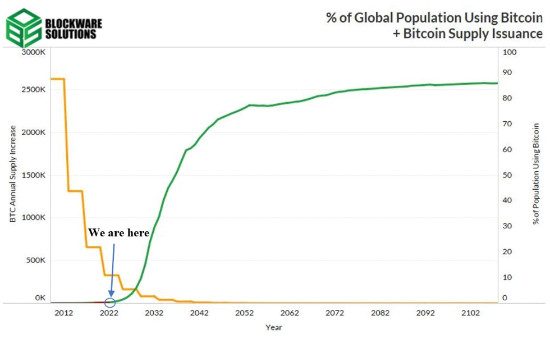 The Blockware Solutions included a chart for that as well, and it's absolutely jaw dropping:

The orange line represents supply - the new Bitcoin generated by the miners. The green line represents the increase in demand - the sharp rise in global adoption as millions of new users hop aboard the Bitcoin train. It shows the percentage of the global population using Bitcoin from now through the end of the century.

Let me translate this into hard numbers to show you just how powerful this catalyst will be.

That may not seem like much when you consider daily trading volume is about 1.32 million BTC per day. But the drop in supply is cumulative and has more impact over time. If you have 900 bitcoins mined per day, that's 162,000 bitcoins added over six months. In 2028 that six-month supply will be slashed to 40,500.

Now let's look at the demand side. Blockware Solutions calculated there are about 30.8 million unique users of Bitcoin today - about 0.36% of the global population.

So we're looking at a 27x increase in users over the next eight years as the amount of fresh Bitcoin falls by 75%.

But you may wonder just how likely it is that the number of Bitcoin or crypto users will explode as much as Blockware Solutions is predicting.

Not only is it likely - it's already happening...

Crypto Use Growing Just About Everywhere

Global adoption of crypto has been percolating for several years, but really started to accelerate last year.

According to a research report published in April by crypto exchange and custodian Gemini Trust Company, 41% of those surveyed globally bought their first cryptocurrency in 2021.

But more noteworthy than the speed at which people are adopting crypto is where much of the adoption is happening. Most emerging economies are embracing crypto at a faster rate than most developed economies. Those folks are a key component of the adoption equation.

Last fall crypto research firm Chainalysis did an entire report on geographic trends in crypto adoption using metrics adjusted to reveal crypto use by ordinary citizens. Then they ranked every country.

The United States is ranked No. 8, but the surprise here is who outranks it...

Vietnam comes in at No. 1, followed by India, Pakistan, Ukraine (using pre-war numbers), Kenya, Nigeria, and Venezuela. Rounding out the top 10 are Togo and Argentina.

Another surprise is the high ranking of India, where crypto users have faced inconsistent and restrictive government policies - and yet continue to embrace crypto in large numbers anyway.

That's even more true of China, which ranks 13th on the Chainalysis list. China's strong showing comes despite repeated government efforts since 2014 to curb the use of crypto.

It's worth noting that China and India combined are home to 2.85 billion people, more than one-third of the world's population. That's a lot of potential crypto buyers.

Among the buyers in smaller countries, one of the biggest motivations is inflation. The Gemini report said residents of countries that had seen domestic currency devaluations of 50% or more over the past decade were five times more likely to say they planned to buy crypto in the coming year. While no one likes inflation, it will drive millions of people to buy crypto.

But numbers only give you part of the picture. To truly grasp what's going on, you need to look at a few real-world examples...

Where Crypto Adoption Is Happening Today

I could give you a much longer list of examples how crypto use is beginning to spread, but you only need these few to get the picture:

The bottom line is, the current crypto market downturn is an opportunity, not a crisis. This is the perfect time for investors to establish or strengthen their positions in digital assets.

But you don't have to take just my word for it.

In fact, there's a Wall Street insider - famous for being a conservative investor - who's even more bullish on Bitcoin than I am. For a long time, he was a huge crypto skeptic, but now he's saying it's the best investment opportunity to come along in the past 30 years.

Skybridge Capital's Anthony Scaramucci has a bold Bitcoin price prediction that's been making headlines, and you can see it right here, along with his advice on what every American should do right now...