Yesterday, we witnessed a short burst of momentum - anchored by stronger banking earnings and improved expectations around rate hikes in July.

The company announced plans to slow down hiring thanks to the ongoing fear of higher interest rates and a slower global economy. Apple will also reduce its spending in some divisions, according to various reports.

The news pumped the brakes on the near-term rally quickly and pushed a momentum pop into a momentum flop. I quickly had to cut some long positions after Apple effectively kneecapped the Dow, S&P 500, and Nasdaq.

I'll be on Midday Momentum to explain that so goes Apple, so goes the market. The stock is part of more than 300 ETFs, and remains a core holding of plenty of institutions.

And in the World's Biggest Trade, we'll look to regroup and look for another downward move in the broader market.

I've shown Shadow Stats inflation for June pointing north of 15%, a statement echoed by Peter Schiff. The "official" CPI number from the Labor Department was 8.7%. But check this out... 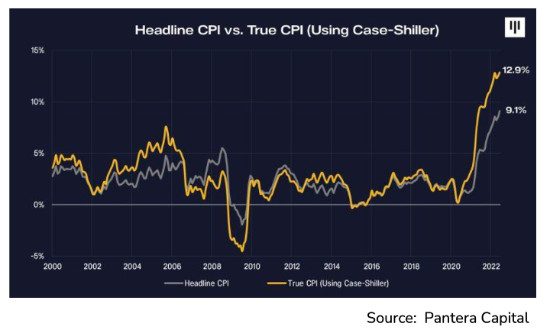 The Case-Schiller index tracks the cost of housing and rentals. Pantera Capital incorporated housing into the CPI to give another alternative - and likely more accurate - measurement of U.S. inflation: 12.9%.

This is a very important chart. It signals to me that inflation will continue to run hot throughout the summer. As I've noted several times, the latest CPI date has just started incorporating large annual rent gains.

Given that rent is a major part of Americans' budgets, I wouldn't be shocked to see a prolonged challenge with elevated prices. Also, energy prices are starting to push higher again after Iraq's energy minister pronounced that crude prices would remain above $100 for the rest of 2022.

I'd love for you to join us in the World's Biggest Trade where we scour the globe in search of the day's winning trade. Take part in shorting the world. A prolonged downtrend in the stock market sets us up for repeated wins going short.

You can find more information by going here.

I'll see you for Midday Momentum at 12:30 p.m. ET, and if you couldn't catch our morning show click here to watch a REPLAY.