Just like city hall, you can't fight a market trend. Once the market gets its mind set on a direction, it becomes harder for rational arguments to carry any weight against that direction. As a matter of fact, sometimes the irrational arguments make more sense in the heat of a bull or bear market.

This proves a few things. First, the trend is truly your friend (one of the oldest proverbs on the Street). Second, following the crowd does pay... sometimes... but it's never good to be a lemming or the last to jump on the market's bandwagon.

One thing the current environment tells us is that investors have all but thrown in the towel on stocks in favor of the market's disgusting long-term trend.

Right now, we're coming off one of the worst first halves of the year in market history, but to hear some investors and analysts talk, you'd think that this is one of the best long-term buying opportunities around as the next long-term bull market is pulling out of the station.

I'm here to tell you that this is not a good thing. I covered this a bit in one of my segments on Money Morning LIVE, but now it's time to dig a little deeper.

With that in mind, I'd like to introduce you to the stages of a bear market, according to my Behavioral Valuation approach...

How Bull and Bear Markets Work, with Pictures 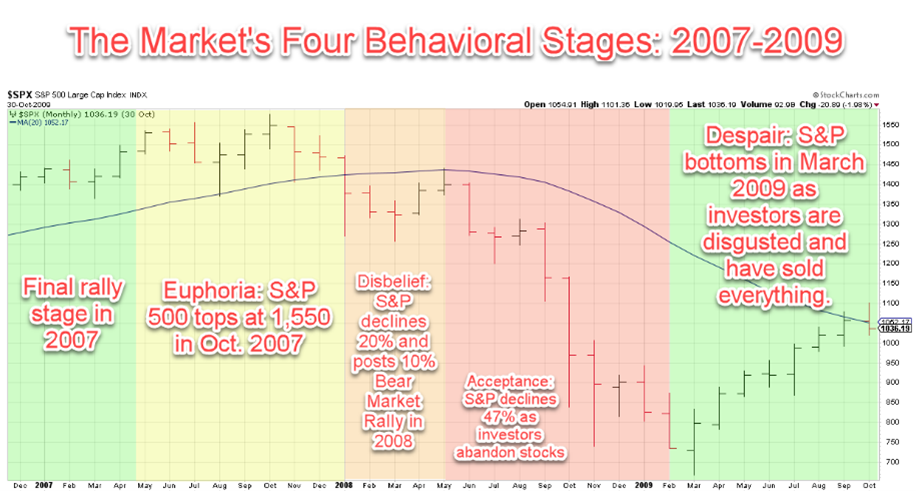 There are four stages to any bear or bull market.

You know this behavior, it just happened in November. That point in the market when nothing feels like it can go wrong, you have to be long every stock and there's no end in sight for the rally. That's where the top ALWAYS forms.

This is the stage that we are in right now. A sustained bear market rally starts to make everyone feel like the bull is back and they use every excuse in the book to ignore the obvious. Things like inflation, economic slowdowns, earnings growth declines - all the things that are happening now - are explained away by a bear market rally that everyone is afraid to miss.

These rallies are tradable, but they should be treaded upon lightly as the slightest headwind will shake the traders out quickly leaving the rest of the market to fend for itself as it enters the Acceptance Phase.

In 2008 the Disbelief Stage happened after the S&P 500 had shed 20%. From there it rallied about 15% over two months only to reverse and then move to another 47% decline as the market accepted the bear market and sold everything that wasn't bolted down to their portfolio.

Just as I said above, this is the stage right after the bear market rally. We'll talk more about the acceptance phase over the next few weeks so that I can prepare you to be nimble and responsive to the market's quick changing nature.

Bear markets end with the Despair Stage. Kenny Glick calls it "buying the blood," which is a little grisly, but it's accurate.

That's right, something as gloomy as despair kicks off a rally. We've all heard the term "the market climbs a wall of worry." Well, the wall is tallest when there appears to be no light at the end of the tunnel. When investors have thrown in the towel. When you can almost hear a collective groan when investors look at a chart.

Despite that feeling and as hard as it is, this is the best time to start buying quality long-term stocks that have been beating into the ground as the cycle gets ready to reverse. You may encounter a few dips and tests, but rest assured that the long-term is now on your side as the market's risk/reward scenario favors a new run to the market's old highs and above.

Modifying our graph from above, the "sweet spot" looks something like this: 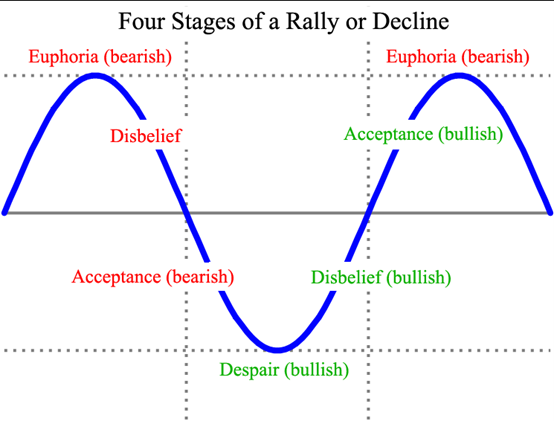 Why does this mark the point at which a rally will kick in? Well, if investors hate stocks, it's likely that they've sold them. We've all heard the term "oversold," or a point where a stock is technically due for a bounce. The same theory applies to investor behavior.

When despair has reached a climactic level, it signals that investors have likely exhausted all of their potential selling pressure. This means that the risk/reward balance has shifted away from risk, as there are fewer participants left to apply selling pressure. Put simply, just as you can get the best seats in a theater when it's empty, you can find the best deals on stocks when investors have left the market due to their despair.

We gauge whether despair has set in by monitoring sentiment indicators such as investor polls, options activity, analyst recommendations, short interest, media buzz, and other signs of how bearish investors are.

Given the Pavlovian-like response of investors to sell the market when the bell rings one can easily deduce that the market is headed towards the Despair stage (that's right I said headed to, not "at"). We'll discuss the other three stages of a rally/decline - Disbelief, Acceptance, and Euphoria - and each stage's signature and market implications in the coming weeks.

The best place to catch me in order to get a handle on these shifts the moment they happen is on Money Morning LIVE, every weekday morning before markets open. You can always get the latest schedule here.

I hope to see you there.