Markets closed Monday after we received yet another warning about the state of earnings in this economy.

Walmart Stores (NYSE: WMT) fell after the bell thanks to an update on inflation and inventory problems. The company's now calling for an 11% to 13% full-year decline in operating income. It also slashed its profit guidance.

Naturally, the problem is linked to inflation.

"The increasing levels of food and fuel inflation are affecting how customers spend, and while we've made good progress clearing hardline categories, apparel in Walmart U.S. is requiring more markdown dollars," CEO Doug McMillon said. "We're now anticipating more pressure on general merchandise in the back half."

All-in, the company projects a $1.8 billion challenge for its Q3 and Q4 numbers.

Naturally, this is bigger than just Walmart and could fuel a cascade in retail stocks over the next few weeks. Let's dig deeper.

The challenge for retail isn't just about consumer spending.

It's also a problem with inventory management. Given the "Bull Whip" effect in retail supply chains, merchandise managers struggled to manage inventories during COVID-19. They initially faced challenges sourcing materials, then ramped up purchases due to concerns about inflation. If a product will cost more in the future, one wants to buy as much as possible today.

However, the softness in the economy surprised most companies. Now, they are sitting on significant amounts of products and must either sell them at a discount or pay large amounts to store products in warehouses and other points in the supply chain.

Year-over-year, Walmart saw about a 30% jump in inventory levels.

Interestingly, that figure isn't as bad when compared to other companies in the retail space. For example, Kohl's (NYSE: KSS) and Dicks Sporting Goods (NYSE: DKS) had about a 40% increase in inventories. Ross Stores (NASDAQ: ROST) increased their inventories year-over-year by more than 50%.

And Burlington Stores (NYSE: BURL), the owner of Burlington Coat Factory, increased its inventories by more than 60%.

It will remain a challenging second half for this sector. While we are witnessing a short-term pop in a few of these stocks over the last month, don't be surprised if they hit 52-week lows later this year.

In fact, you might want to consider aiming at them very soon.

I'll discuss this sector and its challenges later today.

Chart of the Day: The De-Dollar Drive

China is dumping U.S. treasuries at a breakneck pace again. As I've said, China's nonstop flight from the dollar has been steep. As a result, China has dropped below $1 trillion in holdings for the first time since 2012. 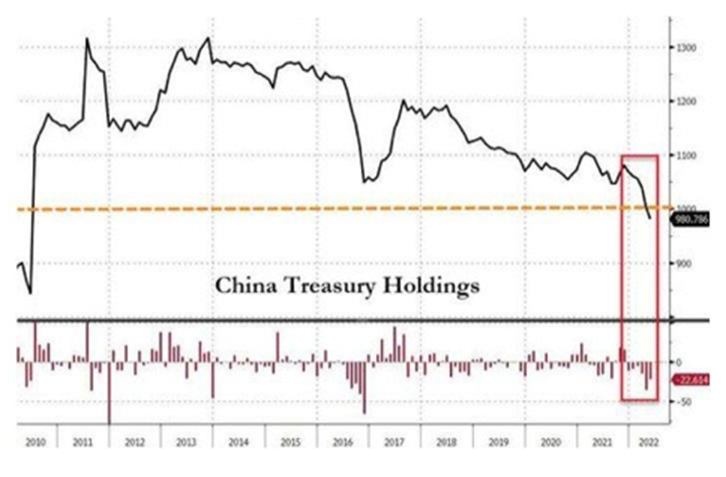 The trend suggests that China will continue this pace to shore up its currency. I also remain concerned about the nation's increased ties to Russia, Iran, Brazil, and other commodity-producing giants. At some point, they'll cut the dollar from the trade situation. It might not be tomorrow... But it's coming. Are you ready?

To watch an episode of Midday Momentum you may have missed click here to watch a REPLAY.