Intrigued, he checked his usual charts: Big money flow, followed by some suspicious technicals. After looking deeper into the stock to find out just what was going on, our team knew we had to share this trade recommendation with readers right away. This trade is set to rocket in under a month - but you'll need to get in as soon as possible to make the maximum gains.

This trade is on Synchrony Financial (NYSE: SYF), an online banking and consumer financing company based in Stamford, Connecticut.

In fact, back in April, Tim recommended two community bank stocks - First Interstate Bancsystem Inc. (NASDAQ: FIBK) and Provident Financial Services Inc. (NYSE: PFS) - that demonstrate just how well this strategy can work. Since he recommended them, FIBK and PFS have grown 14.26% and 4.7% respectively, all while returning dividend yields above 4%. Meanwhile, the Dow Jones and S&P 500 are down 7.32% and 9.22% over the same time frame. And how has fully-online Synchrony done? It's down 13.93%, significantly underperforming the market.

But Synchrony's specific business model puts it in even more danger in these tumultuous markets than other online lenders...

The loans are typically interest-free - BNPL firms make their money from small fees retailers pay on each transaction. It's a business model that emerged in a very low interest rate environment, allowing firms to raise funds at low costs.

Most BNPL providers aren't financial institutions and therefore don't have access to direct deposits. Instead, they borrow the funds that they in turn lend out to consumers. As interest rates rise, it costs more to borrow money, putting pressure on their margins.

Synchrony Financial does have a wholly-owned subsidiary, Synchrony Bank, from which it could theoretically access direct deposits. But Synchrony's financial reporting disclosures show that it still borrows money from "a variety of depositors and institutions" in order to provide loans to its customers. This makes Synchrony's profitability susceptible to interest rate changes - a pattern that's reflected in the company's stock chart. 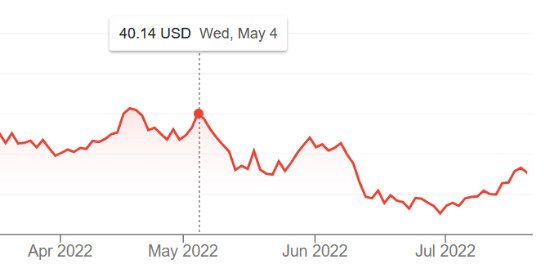 From that first rate hike in May until its low point on June 30, Synchrony plummeted over 30%. Since then, it's rebounded a little over 20% - but we don't expect this dead-cat bounce to last.

The Federal Open Market Committee meets today and is expected to announce another huge rate hike by tomorrow. Most expect another hike of 75 bps, but some have predicted a hike as high as 100 bps considering recent high inflation readings.

It looks like the coming rate hike has not been priced in to SYF's stock price yet, but to get the most out of this trade, you'll need to get in as soon as possible. Here's what our expert Mark Sebastian recommends:

The August 19 expiry gives the market plenty of time to react to the Fed's actions in the coming days.

Money Morning Live subscribers got this trade early last week. To get trades like these straight to your inbox as soon as they come out - and to receive alerts when it's time to cash out - subscribe to Money Morning Live. It's completely free, and you'll also get live daily insights from all of our top experts.