I've surprised people by saying that I am bullish on oil.

This morning, WTI crude - priced in New York - pushed above $99 per barrel. Brent crude is now trading at $108 per barrel.

First, the S&P 500 rally yesterday was not shocking. As I noted on Midday Momentum, the odds of a 100-point rate hike were north of 23% heading into the event. All of that short interest pricing in that big move had to be removed from the market.

We found ourselves yesterday in a position of "forced buying" or covering of shorts. Now that there isn't any real negative catalyst ahead (aside from a possible big CPI print), this rally could easily sustain and now pull even more capital off the sideline. All sectors benefit - especially the energy sector that experienced dramatic levels of shorting back in June and early July.

But there's another issue in the energy sector right now...

Right now, Speaker of the House Nancy Pelosi is set to travel to Taiwan.

If you haven't heard about this, let me update you.

China has threatened a possible military response if she travels there. China believes that Taiwan belongs to the Communist government. The United States views Taiwan as an independent entity.

The U.S. is now sending aircraft carriers toward Taiwan as a response.

If you have a possible military situation... you need oil...

Well... the United States petroleum reserves declined by another nine million barrels for the week of July 22. There was a six-million barrel pull from the Strategic Petroleum Reserve.

You see, the Biden administration keeps using our strategic oil supply to make it look more competent around gasoline prices. That reserve is not some magic candy jar that you keep pulling from.

We need it in the event... that say we have to fight a military battle.

In the United States, our petroleum inventory levels have declined in 80 of the last 108 weeks. We're down 438 MILLION barrels since the beginning of July 2020. So... it's not just this administration.

The U.S. now has the lowest seasonal levels of crude inventories since 2008.

What's worse? There is no plan or signal to the market that we will increase our production and fill our strategic reserves. So, yes... I'm long.

We'll look at how to win this moment in the World's Biggest Trade.

Chart of the Day: Why is This Still a Thing?

Does Dogecoin still have a $9 billion market capitalization? 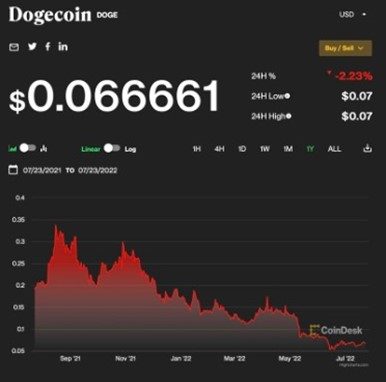 This has no utility. No function. It's speculation at its dumbest.

What on earth are people still thinking?

I look forward to seeing you for Midday Momentum at 12:30pm ET. We will have a special guest joining us today so try not to miss it.