If you had Nancy Pelosi's visit to Taiwan on your geopolitical risk Bingo card for 2022, step up and collect your prize.

I didn't see this one coming, but it's now become an international flash point in an ongoing rift between the United States and China. Pelosi would be the first Speaker of the House to visit Taiwan in 25 years.

Pelosi is scheduled to fly to Japan, South Korea, and Malaysia in what could be one of her last international diplomatic trips in the Speaker role. She does not have Taiwan currently on the official schedule.

Reportedly, Xi Jinping showed the most aggressiveness ever to a foreign leader when speaking to President Biden last week. There are real concerns that a shooting war could start if Pelosi attempts to visit Taiwan.

China considers Taiwan to be a province of China...

What This Means for Taiwan

It's not a secret that President Xi wants to be reunited with Taiwan under one flag.

And the White House has confirmed that it doesn't support Taiwan's independence movement.

In the wake of Russia's invasion of Ukraine, many foreign policy analysts have suggested that China will take action sooner than later and invade Taiwan. Initial estimates suggested military action between 2025 and 2030.

Such an invasion would impact the global semiconductor industry overnight... and fuel a radical shift in the future of Taiwan Semiconductor (NYSE: TSM). In addition, investors should watch the Ishares MSCI Taiwan ETF (NYSEArca: EWT), which isn't far from its 52-week low. There is a lot to unpack on this story... and we'll dive in later today.

Now, this is something. Around the globe, sovereign debt with negative interest rates surged in 2016 and peaked in late 2019. 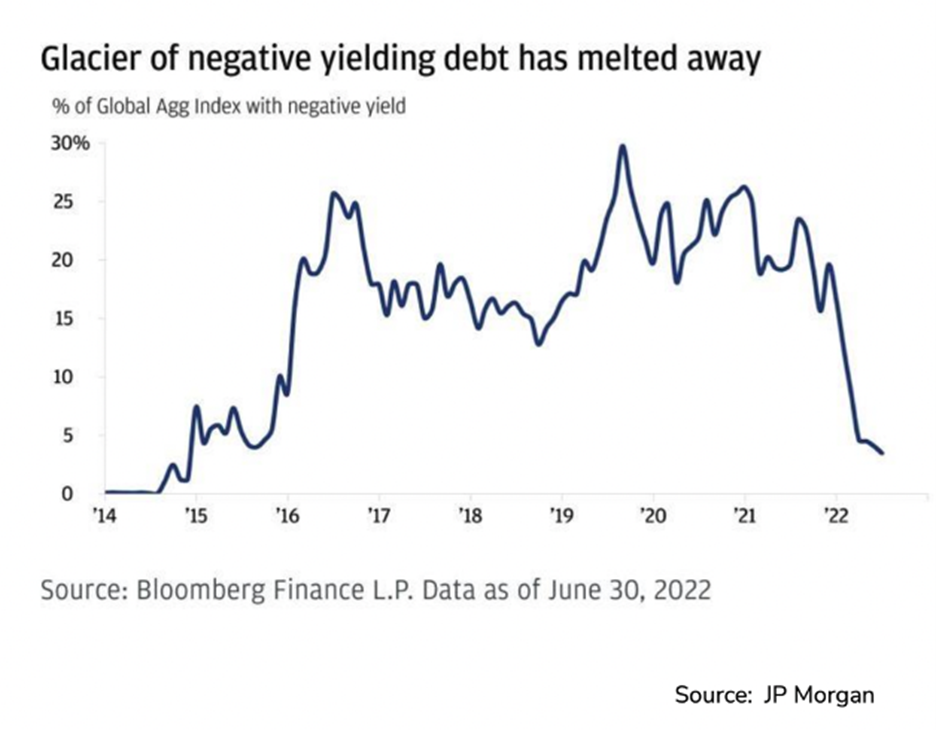 Now, the global central banks are hiking rates to contain inflation. They're not raising interest rates. And the percentage of debt that was yielding negative returns has dropped like a stone.

This puts a lot of places in certain peril. There are countries that actually can't afford interest rates moving higher and need the negative rates to stimulate their economies. I'll walk you through some of those names during our live session. And we'll look to trade around them in the World's Biggest Trade at 1pm.

We have Green momentum to start the day, but pay close attention to ongoing tensions between China and the United States. I'll be with the World's Biggest Trade members at 1pm ready to pivot if we see a shift in momentum.