A few months ago, I raised concerns about what would happen to this economy on the other side of Q4. "Is a credit bubble forming in the United States?" I asked.

No shortage of people had opinions to the contrary. I've been told that the U.S. consumer is "well capitalized." I've heard from politicians and from the mainstream, "serious" economists that they have about five to six months of cash thanks to the largesse of stimulus money from the last few years.

How do they explain what I'm about to show you?

Total U.S. household debt surpassed $16 trillion. That's now $2 trillion more than where we sat at the end of 2019 before the pandemic.

From a macro-perspective, why are Americans now $2 trillion more in the hole?

I've warned that inflation is forcing people to pay more for everything - and they're mortgaging the future to do so. Credit card balances jumped another $46 billion in June, while APRs rose and inflation became entrenched.

Auto loans increased by $33 billion - as the average cost of a vehicle loan surged to unsustainable levels.

So... inflation is entrenched...

Real wages are declining, according to the recent Census report...

And credit is ballooning...

What is the end game here?

A possible credit bubble... and one that Black Swan traders are salivating at.

Chart of the Day

Look at this chart. This is real market capitalization compared to GDP. 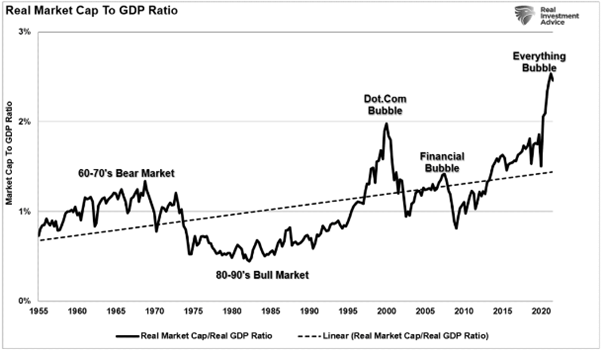 We're in Alice in Wonderland, and people keep trying to justify these valuations right now. More than 30% of companies trading today are unprofitable... I see hundreds trading at nosebleed multiples based on an insane amount of projected growth. Where is the growth, though?

Reversion to the mean is one of the strongest forces in global finance - and history proves that we eventually get there. Eventually.

I mean... are we this delusional to pretend that a correction isn't inevitable?

Can we stop pretending... Thanks to Real Investment Advice for this chart.

We will discuss all this and more at Midday Momentum at 12:30 pm eastern. Then it's off to trade with the Globetrotters in the World's Biggest Trade room at 1pm. I hope you'll come and hang.