I'm running behind today. The dog got out of the yard and took us on yet another adventure across the Water District of Bonita Springs, Florida.

So, my time typically left writing and analyzing the markets is limited, and I have to prepare for Money Morning LIVE as I'm on at 8:30 am EST.

I will say that the situation around inflation has just hit a new phase.

Not only has the Fed mismanaged it, but we now also have "Ivory Tower" language coming from officials. On Wednesday, San Francisco Fed Bank President Mary Daly offered a Marie Antoinette statement for the ages...

It's Good to Be Wrong

For being so wrong about the management of the U.S. economy, you get a nice cushy academic job that leads to a salary of $422,900 per year. That's the life of Mary Daly. She can't comprehend the impact of inflation on Americans... because she doesn't feel like inflation is there anymore...

In an interview with Reuters yesterday, she said: "You know I have to say that I live ... I don't feel the pain of inflation anymore. I see prices rising, but I have enough that I can make substitutions, that I can do things. So I'm not immune to gas prices rising, food prices rising. I sometimes balk at the price of things," she said. "But I don't find myself in a space where I have to make tradeoffs because I have enough, and many, many Americans have enough."

Well, if Americans stop putting things on credit cards, we'll have a deep recession. But if we have this attitude among people working at the Fed, we have something worse than mismanagement.

Now, Daly must have caught herself making this terrible statement - because it wasn't long after that she expressed empathy for Americans who don't have enough. She added: "So in my daily life, I see the rising prices, but I'm fine, because I have a sufficient income to make those tradeoffs. For other people, that's not the case, and those are the people that [lowering inflation] is so important for."

In the media world, most people were only focused on the first quote.

Daly is foolish for these statements, but she's also been the most wrong around policy going back to the last two meetings. She continues to advocate with slow 50-point hikes and even dissented in recent meetings.

I expect inflation to remain entrenched in this economy for the foreseeable future.

Momentum is Green. The S&P 500 is now back at its June highs and is looking to push through the 415 level on the SPY - the index's tracking ETF.

Chart of the Day: But the Job Market is Strong

I've had multiple conversations with people in Washington, pretending we are not in a recession.

"The labor market is strong..." they say.

Cool. Here's a chart from Jim Bianco that shows the three high inflation-fueled recessions of the 1970s. As you'll see... all of them started with strong labor markets. OMG... EVIDENCE THAT THESE PEOPLE ARE WRONG! 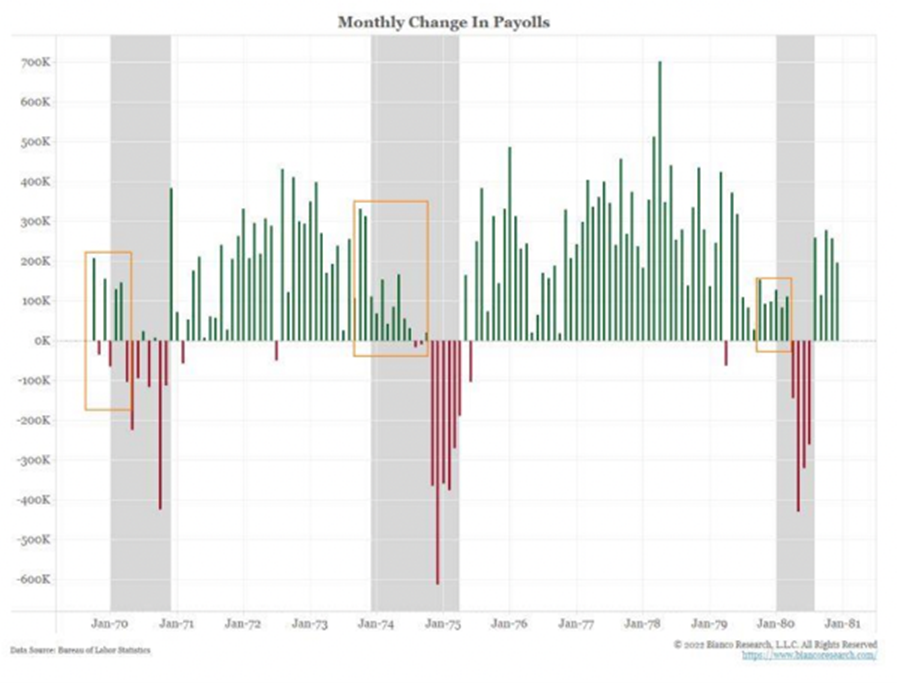 It will require a 1 million harmful jobs print for these people to admit basic economic reality. The July print for jobs should be positive... estimates are 250,000 new jobs.

We'll be talking about all this and more on Midday Momentum at 12:30 pm EST. See you there!