The next five trading days will dictate whether the S&P 500 moves to 4,300 or drops like a stone into the 3,800 range by late September. Today's jobs report will fuel a one-sided move in this market, which continues to ignore the possibility of entrenched inflation and a global economic recession.

I am currently reading books about events in the 1970s. At the time, Fed Chair Arty Burns couldn't find a proper way to manage the economy through three different sharp economic downturns.

We saw inflation return with a vengeance each time he tried to cut interest rates.

Energy costs were one problem, but supplies were another.

Next week's CPI number will likely show a drop in energy costs.

Even more challenging, the wage growth we've discussed could start to spiral higher and higher in a way that raises prices for the consumer.

The policy responses so far have been comical. Congress is trying to pass an "Inflation Reduction" act that raises taxes (inflationary), subsidizes preferred energy sources (inflationary), and claims to reduce the budget (it won't).

It's staggering that the people who can't run a lemonade stand are in charge of our economy. This will remain a problem for quite some time. Don't say I didn't warn you.

Momentum is Green. The S&P 500 is bouncing around as investors eye the July jobs report. In focus is the ongoing rise in wages when inflation is even higher. The Federal Reserve is expected to raise rates by at least 50 points in September, while the odds are increasing that an even higher rate will be necessary.

Chart of the Day: Earnings Cuts

Yeah, pay close attention. The earnings downgrades have been quite strong over the last week. This is a reason why you can't just trust the numbers. Momentum will switch in the next month, and long-only funds need to wake up. 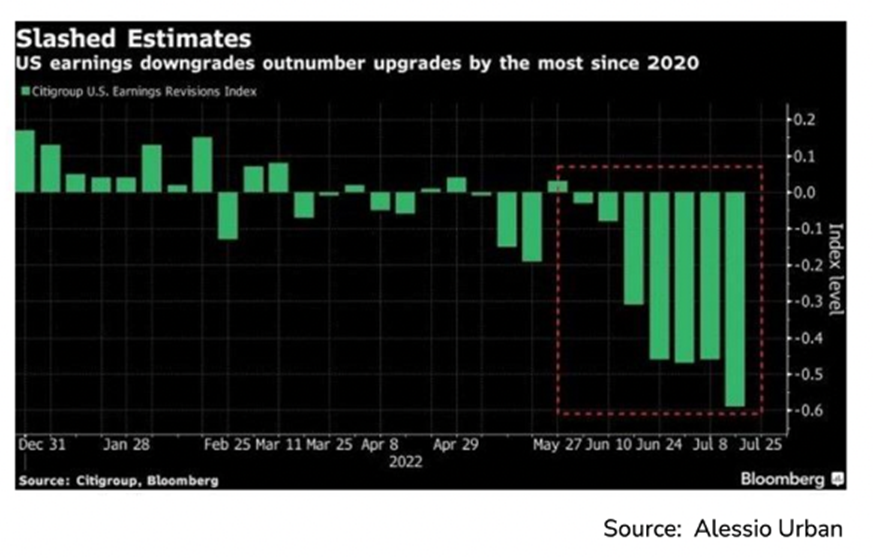 We see the largest number of downgrades compared to upgrades since 2020. That should be concerning because the Fed can't step in and lower rates to zero with interest rates raging. THIS TIME IS DIFFERENT!

TGIF... especially if you're a Tim Melvin fan. As usual Tim will join us for Midday Momentum at 12:30 pm EST.

Make sure to grab a pad and pen because Tim always has some great businesses worth jotting down.