This week, we received an update from the New York Fed on consumer expectations for inflation in the years ahead. I cannot believe that anyone is taking a victory lap around this one.

Some officials are cheering that people believe inflation will fall from 6.8% to 6.2% in the year ahead. In addition, three years from now, estimates sit at 3.2%.

I hate to break it to anyone, but those figures are WELL above the Federal Reserve's target rate of 2%. But there's something else you need to consider.

Why are we trying to forecast inflation with consumers? I thought that we had a rock-solid team of economists running the Federal Reserve whose job it was to determine the outlook.

Why are they surveying people who didn't finish high school and barely understand where inflation comes from? No offense, but I thought we were supposed to trust the experts. Even worse, economists are constantly looking to prove that their old models work, only to discover that their methods never did.

Remember that from 2013 to 2021, the Federal Reserve believed that interest rates would be north of 3% thanks to their constant pumping of capital into the markets. It never jumped above 2%.

Now, we're on the other side of that curve. We're dropping another few hundred billion dollars in Congressional stimulus onto the economy... we're raising taxes in a recession and immediately spending the revenue... and we're subsidizing industries with high costs and high demand.

Tomorrow, we'll again see that housing, energy, food, and other commodity prices are elevated. And there is nothing that the Fed can do about this.

The Fed can't print the stuff we need.

Inflation will likely remain high - stubbornly high - for a few years. And until the Fed finds the political will to raise interest rates above 5%, I doubt we'll get it to stabilize. Be very cautious.

Chart of the Day: Wage Spiral

But what is the source of those wage increases? 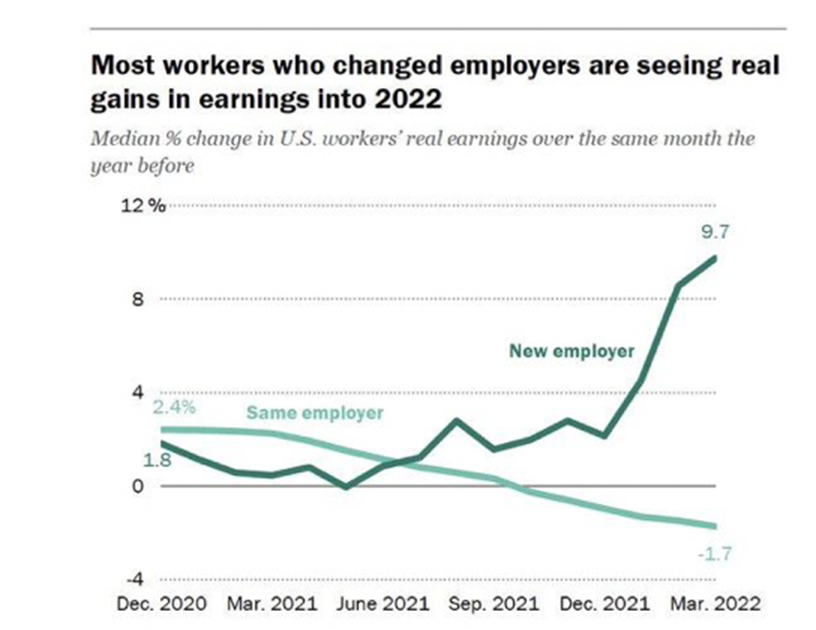 Real wage growth is coming from people who are going to work at other places. There has been a 9.7% wage increase among people leaving for new jobs.

But people who stayed at the same employer have seen a decline of 1.7%. This is a problem for the same-employer companies as they struggle to retain talent and are forced to do "more with less." This may be a severe problem for smaller companies with fewer resources and benefits to provide to existing workers.

There are 10.7 million jobs open in the United States, and these jumps to new jobs will remain a trend.

As we brace for the consumer price index (CPI) this week, we look to take low-risk shots at the goal. Unfortunately, this rally is getting a bit long in the tooth and probably needs a kick to break resistance or rollover.

It's times like these that we must remain patient and calculated. In the World's Biggest Trade, we will take what the market gives us. With few catalysts on the calendar this month, this week should provide us with some clarity of direction

Get instant access to our trading room, pre-market reports, and member exclusive replays of the World's Biggest Trade today and Defend Your Portfolio!

P.S. I'll be joining Chris Johnson and the Night Trader Room, Wednesday August 10th at 3:45 pm ET to discuss energy and all things trading. I'll send you an email reminder for you to join us for this special discussion. You are not going to want to miss it. This conversation is sure to be helpful when managing your money.