About 10 years ago, I visited T. Boone Pickens at his famous ranch, Mesa Vista.

The ranch, at 100 square miles, consumes a little over 10% of Roberts County, Texas. It has 18 miles of manmade lakes for duck hunting and bass fishing. There are more than 100 different fields for hunting quail and over 1,000 wild quail feeders.

The landscape was also covered in oil and gas wells.

Boone was, for most of his life, an ardent believer in "Peak Oil." He believed that oil production in the U.S. had peaked in the early 1970s and that, in only a few more years, all the oil would be gone.

I’d first met Boone in part because I had mocked Peak Oil as yet another nonsense Malthusian fantasy. At a 2014 Stansberry Research Conference event in Dallas, T. Boone conceded that he’d been dead wrong about Peak Oil.

(In a wonderful example of how truth is often stranger than fiction, a huge amount of oil and gas was discovered directly underneath Boone’s own ranch. By 2014, oil and gas production in Roberts County exceeded 3 million barrels annually.)

The most important lesson T. Boone taught me was that commodity industries – like oil and gas – that require huge capital investments are fraught with risk.

The Real Story of T. Boone: A Fortune Made on A Myth

Most people think T. Boone Pickens made his fortune developing Mesa Petroleum, which by the early 1980s was America's largest and most successful independent oil and gas company.

Boone's unfailing belief in ever-higher prices for fossil fuels led Mesa Petroleum into serious financial distress in 1996. Boone was forced out of the company. He was 67 years old and virtually broke. He took his last $8 million and raised another $30 million from friends to start a hedge fund, BP Capital.

What did he invest in? Natural gas, of course. He kept pyramiding leveraged bets on higher prices for natural gas. Within 18 months, he'd lost more than 90% of his fund, which dwindled to under $3 million.

What happened next was the greatest speculative triumph in the history of the financial markets.

The gains came, in large part, because of the California state energy crisis and the subsequent spike in natural gas prices. And the same thing is about to happen again – but on a much bigger scale – in Europe.

In 1996, California “deregulated” electricity, creating a market structure that could have only been built by politicians. Baseload providers (Mirant, Reliant, Williams, Dynegy, and AES) were to supply power on a competitive basis to the California Power Exchange.

But to ensure competition, they could only sell power to the system the day before it was to be delivered to the customer. Worse, the regulators demanded caps on wholesale energy prices for a decade and based the caps on prices for energy that existed before deregulation began.

As a result of these caps, there were no additional power plants built in California between 1990 and 1999. Meanwhile, the population grew by 13%. Additional demand for power was supplied by importing electricity from Oregon and Washington, which normally came from hydro-electrical plants.

In 2000, the stage was set for a huge crisis when California finally deregulated wholesale prices – but continued to regulate retail prices. A drought led the hydro-sourced power to leave the market. That, along with an absence of any long-term market for power, led to skyrocketing wholesale electrical prices – which the retail utilities had to pay because long-term contracts were not allowed.

The result? The power went out all over California with rolling blackouts as the retail utilities – which couldn’t pass the price increases on to consumers – were forced to balance supply with demand by rationing power. Eventually the state was forced to sign long-term supply agreements with major natural gas-based suppliers. The crisis cost the state of California an estimated $40 billion, as natural gas prices soared on anticipation of increasing demand.

And in the meantime, Pickens’ hedge fund had been buying natural gas futures throughout 1999 and 2000 and continued to do so through 2007. By early 2008, as oil soared to around $150 per barrel, T. Boone’s fund had earned more than $8 billion in profits.

Pickens spent 40 years looking for oil and producing millions and millions of barrels of it. But what made him a billionaire wasn’t producing anything. BP Capital didn’t own a single oil field or gas well. It merely owned the rights to energy other companies had to produce.

California All Over Again…But Supersized

Just imagine what Pickens would think of the opportunity being created by European politicians today.

Just like California in the 1990s, Europe has regulated itself into a severe energy shortage. Bans on hydraulic fracturing and political decisions to abandon nuclear power led to dependence on Russian natural gas. Then Russian President Vladimir Putin turned out to be even less reliable than wind and solar power.

The result: Europe is spiraling into an economic collapse, with severe consequences for the entire global economy. The only solution: Much higher prices for natural gas.

Fears of a halt in Russian energy flows this winter have recently sent European natural gas prices spiking into previously unimaginable territory, hitting a record of $272 per thousand cubic feet (mcf) this summer. (For reference, U.S. gas prices traded around $3-$4 per mcf for much of the last decade.) 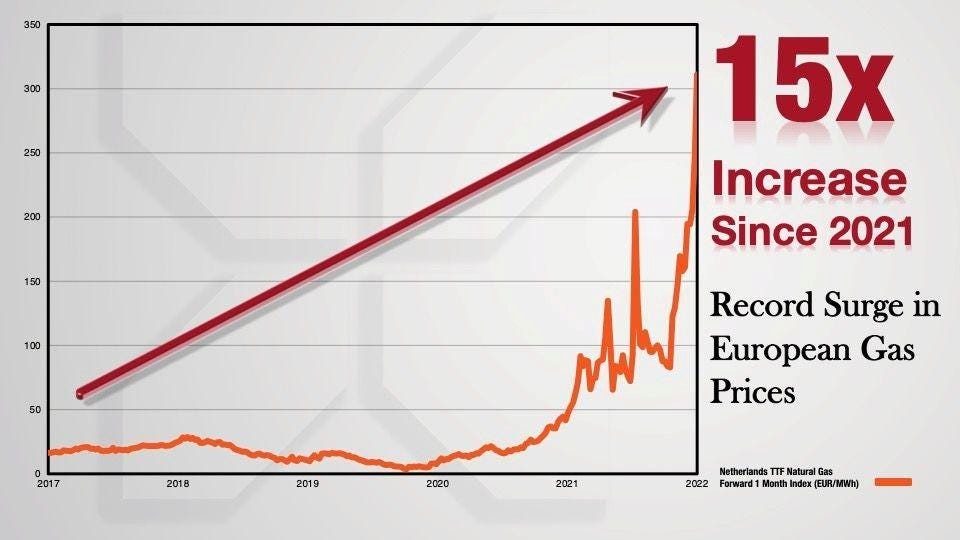 Europe finds itself in a situation with power prices trading like a meme stock stuck in a short squeeze. 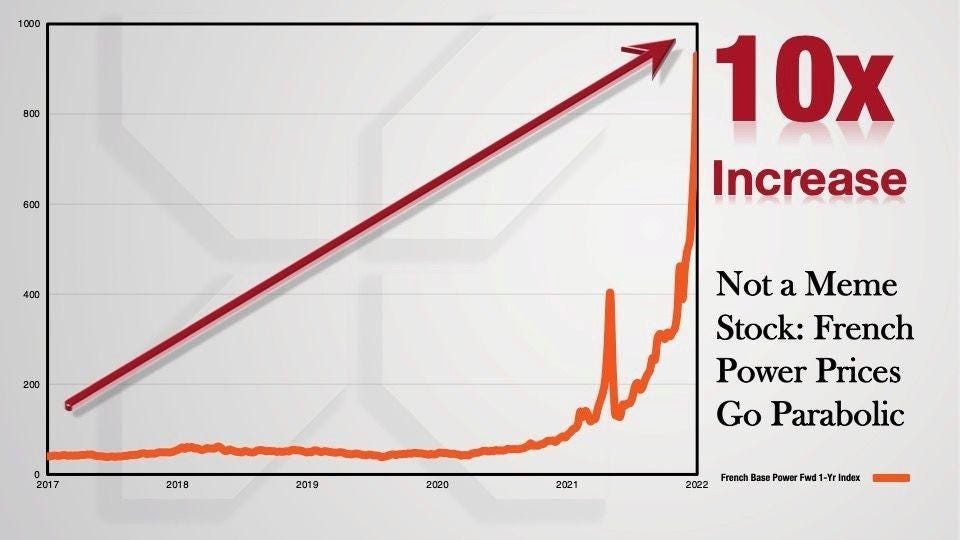 This isn’t only hurting consumer demand. Natural gas and electricity are the two key inputs for manufacturing in Europe.

Mild weather and ample gas storage in Europe has caused spot natural gas prices to plunge in recent weeks. But the lack of Russian volume means that Europe’s energy supply remains dependent upon the whims of mother nature.

We Can Make a Fortune the Same Way Pickens Made His

For now, the wholesale power market is the focal point of the European energy crisis. But it's only a matter of time before wholesale prices hit consumers in the retail market. The political solution so far has been to print more money and attempt to manipulate the market with price controls!

And across Europe, governments continue to regulate retail prices of electricity, while subsidizing utility companies (with printed money) that have been bankrupted because they cannot pass on the new, vastly higher cost of energy. The only solution is producing or importing a lot more natural gas.

BP Capital made $8 billion when these exact same things happened in California. How much will you make on Europe’s crisis, which will be even bigger and last even longer? The situation is like a coin where both sides are heads.

As Russian energy supplies leave the world's markets, global demand for American energy will continue to grow, pushing up the price of energy that can be exported from America, like oil, coal, and liquefied natural gas ("LNG"). That will, in turn, lead to higher electrical prices here, too.

And in places like New England, which rely heavily on natural gas – but which lack new natural gas infrastructure – the price spikes will look more and more like Europe's: 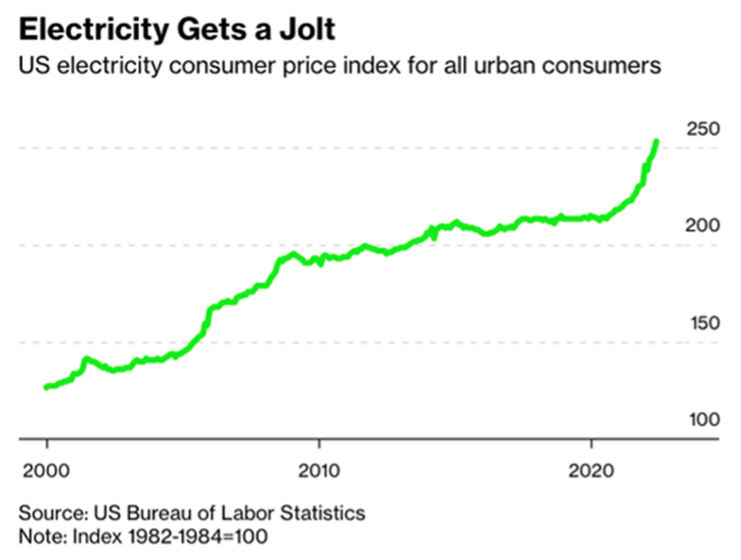 The only cure to these problems is increases to baseload power generation – that is, raising the minimum power that can be produced by the electrical grid.

And the fastest and quickest way to accomplish that in Europe is building natural gas-fired power plants. That will mean big increases to American LNG exports over the next decade. There's truly no other solution.

In America, that will mean more natural gas pipelines, more drilling, and more production. Well-informed investors (including my subscribers) are well positioned to profit with several pure LNG plays

I recently launched an advisory called The Big Secret on Wall Street (This Week). This is the flagship letter of my brand-new publishing venture, Porter & Co.

We’re a small shop of world class researchers and financial writers headquartered in an office over top of the tractor barn on my farm in Maryland.

We’re committed to providing individual investors like you thorough and exhaustive explanations of major investment themes, from the big, global picture all the way down to the financials of the companies leading the sector…

We do it all in plain English, not Wall Street jargon. So, it’s easy to understand and act on our very best ideas…

This is a major energy crisis that could spread from Europe to New England this winter, and then across America. If this happens, it will wreak even more havoc on the ailing stock market and economy.

In the video, I name prominent politicians that orchestrated this crisis. And get this: I even reveal how certain progressive politicians have been warming their homes with RUSSIAN GAS while publicly denouncing Vladimir Putin and courting liberal “snowflake” voters.

In fact, this video has been called “scandalous”

Do yourself a favor and check it out before it’s taken down. I’ve seen in the past just how far powerful people will go to silence me.

P.S. In the video, about halfway through, I reveal a way you could make 10-50x returns on an American energy company that’s set to go up like a moonshot if the lights go out in Boston this winter…