2021 was a record year for the IPO market, fueled by the popularity of special purpose acquisition companies (SPACs), low interest rates and the U.S. government handing out billions in stimulus to millions of Americans. This was the capstone to more than a decade of low- to no interest rates, and companies took full advantage.

For the public markets, it was, “Let the good times roll.”

2022 was very different. All of the cash rolling around the global system began to accelerate dormant inflation, and global central banks, which had completely misjudged the “stickiness” of that inflation at the outset, began to tighten policy painfully, and interest rates were raised at a record pace. Stocks began to sink into a bear market, and are down anywhere from 20% to 30% from their peaks.

In this environment, companies looking to go public took a step back leading to one of the worst years for IPOs in a decade. 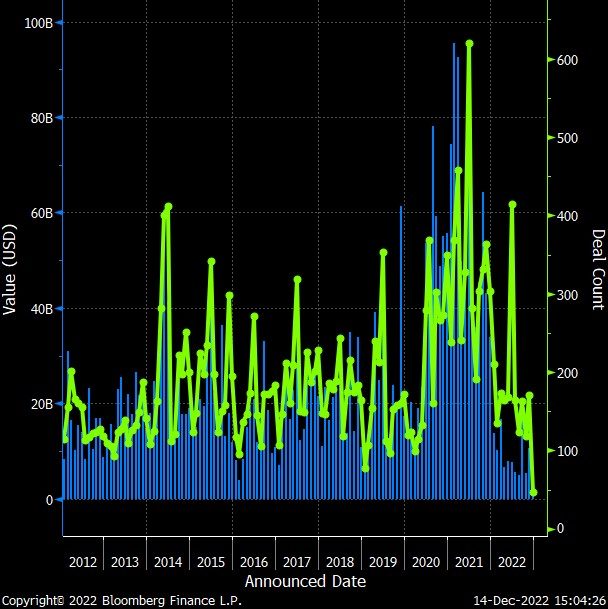 But that could all change in 2023 as interest rates reach their peak and inflation comes down. Now the companies that planned to go public in 2022 have their sights set on 2023.

It could be a big year as long-delayed plans are finally put into action.

How to Think About IPO Investing in 2023

IPO investing will always carry a little risk. You don't know what to expect from a new stock. All you have to go on is past performance, which can be an unreliable indicator for the future.

However, you can still get some idea of the company's trajectory compared to others. If a company's revenue appears to be accelerating, and you see its product going up in demand, it could be an IPO to watch.

If the company's revenue appears to have leveled off after years of growth, the IPO might be a cash grab.

You'll never know for sure until it happens. But you can always dive in for a little more clarity.

Expected valuation and price can offer that. But they can also be hyped up, in which case, you'll see the stock crash from the high post-IPO.

That's why, for many IPO stocks, it can be a good idea to hang back, and give them some time to see how prices fluctuates.

Databricks has been dropping hints about going public throughout 2022 and it looks likely that this best-in-class analytics company will enter the public markets in 2023.

The Databricks platform allows for managing data regardless of where it’s stored. This makes real-time analytics possible and frees up customers who don’t have to be tied to one specific system.

Databricks was valued at $48 billion during a private fundraising round during August 2021. It could be among the biggest IPOs of 2023.

Versa Networks is an extremely promising cybersecurity company. Cybersecurity has been a tech epicenter over the past five years; worldwide, corporations and governments are on track to spend a whopping $10 trillion annually by 2025.

Versa Networks is a leader in the secure access service edge (SASE) market, a type of Cloud-native security product. This segment is growing fast - Gartner predicts that this product category will see spending increase at a compound annual growth rate of 36% through 2025.

Versa Networks moved closer to IPO as it raised $120 million in equity and debt in October 2022. The round, led by BlackRock Inc. (NYSE: BLK), is important to getting the company cash-flow positive while keeping its annual revenue growth rate over 50%, said Kelly Ahuja, CEO at Versa Networks.

That was stated as its final funding before an initial public offering. While the company declined to disclose its current valuation, it did say it was higher than the previous round in 2021 when it was valued at $700 million.

Flexport technology provides logistical and supply-chain services that helps streamline the process of connecting all entities in the shipping process. And that’s badly needed: it can take more than 20 companies from start to finish in supply chains.

Years after the start of COVID-19, supply chains still have not been able to catch up; semiconductors, cars and furniture still take months to arrive. The Russian war in Ukraine and COVID disruptions in China aren’t helping.

Early in 2022, Flexport raised $935 million in its Series E funding round with major investors including Softbank Group Corp ADR (OTC: SFTBY), Andreessen Horowitz and Shopify Inc. (NYSE: SHOP). This put the company at an $8 billion valuation.

While there have been no official announcements regarding an IPO, given the later rounds of funding and the hot logistics market, it’s likely we could see an IPO in 2023.

Stripe is an emerging powerhourse in the payment processing industry. It’s not exactly a thrill-a-minute segment, but it keeps our entire economy working. To put it in perspective, in 2018 Visa Inc. (NYSE: V) processed over 30 billion transaction and $2 trillion in payment volume in a single quarter.

This is why we have seen companies like Paypal Holdings Inc. (NASDAQ: PYPL) and Block Inc. (NYSE: SQ) spend billions to attract users to use their payment software.

Here’s where Stripe comes in. Founders Patrick and John Collison started Stripe to improve the payments process for small- and medium sized business (SMB) merchants. They work with credit card companies as an intermediary to make onboarding and payments easier; Stripe’s product is easy to use for companies and their customers.

This has why Stripe has grown from a two-guys-in-a-garage business to one valued at $74 billion as of mid-2022. It has to be said, that figure is actually down from Stripe’s peak $95 billion valuation, but it’s still immense for a business of this size and scope. If it goes public anywhere near $74 billion, it’ll be one of the largest payment companies in the United States.

Arm is actually 30 years old by now – and one of the largest semiconductor firms you’ve never heard of. From its Cambridge, England base, it’s shipped more than 230 billion chips across the world. You probably touch its technology every day. Arm is behind the software of Apple Inc. (NASDAQ: AAPL), Samsung Electronics Co. Ltd. (OTC: SSNLF), OnePlus+ - almost every smartphone in use today. Arm chips are inside laptops, calculators, and hundreds of other “smart” products around the globe, including millions of cars on the road today.

In the latest quarter, Arm reported $656 million in revenues and shipped 7.5 billion chips, booking growth across all market segments.

In 2020, rival chipmaker NVIDIA Corp. (NASDAQ: NVDA) agreed to buy Arm from its owner, Softbank Group, for $40 billion. However, the deal was stopped due to antitrust scrutiny and the acquisition was scrapped.

Now Arm is looking to go public with SoftBank CEO Masayoshi Son indicating it could go public on the NASDAQ exchange in 2023.

This could be one of the hottest semiconductor IPOs in years with scale that rivals Intel Corp. (NASDAQ: INTC), Advanced Micro Devices Inc. (NASDAQ: AMD) and Taiwan Semiconductor Mfg. Co. Ltd. (NYSE: TSM)

In December, 2021 Reddit announced it was gearing up for an IPO - with a valuation of over $15 billion as they file confidentially with the SEC. While a year has now passed and the meme stock boom may be over, Reddit’s platform has much more to offer than it ever did.

According to some Reddit statistics from Oberlo, the social media site has 50 million daily active users, making it one of the top 10 most popular social media sites in the United States. It boasts more than 130,000 active communities.

The platform is not without revenue either. In 2021 Reddit disclosed it made $100 million in the second quarter, which could imply a $400 million annual run-rate. Reddit will have a wild IPO that could land in mid-2023. With an estimated $15 billion valuation, I would not be shocked if the issue is oversubscribed given the severe lack of Big Tech IPOs right now.

Get the latest trading and investing recommendations straight to your inbox.