If you think the Fed's going to fire hundreds of billions or trillions of dollars of "stimulus" rounds at the coronavirus crisis and pierce the virus's grip on mankind, on the market, and on the economy, you're wrong.
This is an existential threat to humans, markets, and economies that the Fed's ammo can't kill - but it can sure make it worse.
Here's what the Fed's doing, what it's going to do, why it won't work, how you'll know it's not working, and how they're going to make everything worse. 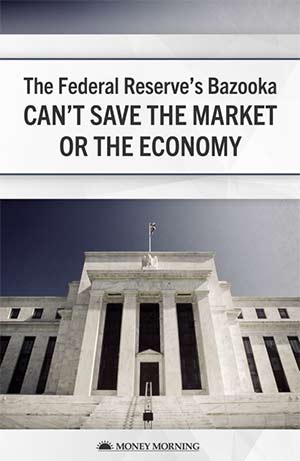 Back in July 2008, as the financial crisis was heating up, then-Treasury Secretary Hank Paulson asked the Senate Banking Committee for an unlimited amount of credit to rescue Fannie Mae and Freddie Mac, explaining, "If you've got a squirt gun in your pocket you may have to take it out. If you've got a bazooka, and people know you've got it, you may not have to take it out. By increasing confidence, it will greatly reduce the likelihood it will ever be used."
Paulson got his bazooka but still had to run back to Congress two months later in October 2008 and beg for $700 billion more, this time to bail out Wall Street.
The Federal Reserve, America's private central bank, on the other hand, doesn't have to go to Congress; it's got its own bazooka and an unlimited amount of ammunition, which it's already been firing at targets right, left, and center.
The Fed can "print" as much money as it wants without asking anyone for anything and fire its funds at will.
It's already fired hundreds of billions of dollars at its primary target, the too-big-to-fail (TBTF) banks that feed the Wall Street moneymaking machine, and lately, once again, money-losing machine.
On Tuesday, March 3, 2020, with bad news about the novel coronavirus infecting U.S. equity markets faster than its human infection rate, in a surprise move at an "emergency meeting," the Fed cut the fed funds rate, the rate at which banks lend money overnight to each other, by 50 basis points, to a range of 1% to 1.25%.
Then on Wednesday, March 11, 2020, the Fed said it was increasing the amount of overnight lending it directly favors big banks with from $200 billion to $500 billion a day, if needed.
Then, on Thursday, March 12, 2020, in an official "Statement Regarding Treasury Reserve Management Purchases and Repurchase Operations," the Federal Reserve Bank of New York, the Fed's most important Regional Bank, where it conducts all of its open market operations (trading), announced it was upping the amount of short-term loan money it would make available to banks to $1.5 trillion.
"Term repo operations in large size have been added to enhance functioning of secured U.S. dollar funding markets," was the core message.
The New York trading desk would immediately offer $500 billion in three-month (term) loans that day, another $500 billion in three-month loans the next day, and another $500 billion in one-month loans to whoever wanted a shorter-term loan. Additionally, the Bank's statement declared the term loans would be offered continuously on a weekly basis through month-end.
What the Fed's doing is flushing up its TBTF banks with "liquidity," meaning money they're tight on. Why are they tight? Because the money they should have available, their excess reserves, are parked in accounts at regional Fed banks collecting interest.
Since the Fed's offering really cheap money loans, term loans, as a matter of fact, banks are borrowing from them and not pulling the $1.5 trillion in excess reserves they have parked at the Fed and are collecting interest on.
If America's banks are in such great shape, which we've been told for years by the banks themselves, who keep making outsized, record profits and buying back their own shares, why do they have to borrow from the Fed like they're facing an existential threat?
If they don't need the money, they're borrowing to trade. They're borrowing to buy Treasuries, which they lend overnight to each other as collateral for more loans, which they use to buy more Treasuries, which lowers yields, which makes interest rates a lot lower, which scares the public who think the "flight to safety" is a harbinger of horror to come, which prompts the Fed to cut more, which lowers rates, which, most importantly, increases the price of existing Treasuries, which gives the banks a profit on their holdings, on their Treasury trading.
That's how the game works.
Are banks in trouble or are they just being greedy? The answer is both. They're trying to trade Treasuries to make money to help their financial condition, which is shaky, but not yet unsound.
If the TBTF banks are in trouble, and they may be headed in that direction, we're all in trouble - again.
To read the rest of this report - and find out just how much worse things are going to get - enter your email below: