Alibaba stock was all the rage when the company launched its initial public offering (IPO) in 2014. 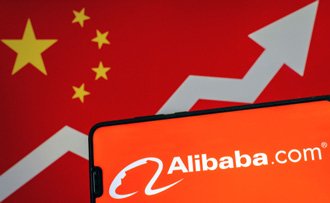 And little has changed since. Alibaba shares continue to be a prized investment for many, and analysts expect the trend to continue for years.

How did Alibaba get where it is today? And is buying Alibaba stock today the right investment for you?

This article will bring you up to speed on Alibaba's history, including the impressive Alibaba growth story.

Alibaba.com is one of many e-commerce websites owned by Alibaba Group. Others include Taobao, the world's third most frequently visited website, and Tmall, a website similar to Amazon.

Alibaba Group's e-commerce sites account for about 80% of Alibaba revenue.

But Alibaba is developing other revenue streams as well. The company is expanding its cloud computing business, and growing Alibaba revenue generated through online streaming and its digital payment system, Alipay.

Many people refer to Alibaba as "the Amazon of China," but that's not entirely true.

The main difference between the two companies is that Alibaba focuses on serving other businesses while Amazon sells to consumers.

Alibaba runs e-commerce websites, yet it doesn't own and manage the inventory sold on those sites. The company's business customers, which sell through Alibaba's websites, do.

Amazon lets businesses sell through its website, but it also owns and sells many products directly to consumers.

The good news for investors is Alibaba's business model is working. The company's grown exponentially since its founding, and revenue has more than tripled in the last three years alone.

The company's first website was Alibaba.com. It soon launched a Chinese version of the site as well.

Alibaba's first significant investor came via Softbank Group in January 2000. The Japanese conglomerate put $20 million into Alibaba, which would grow to billions of dollars in value.

In 2005, Yahoo bought a 40% stake in Alibaba for $1 billion. The investment, at the time, made the U.S.-based company the largest investor in Alibaba.

Alibaba bought back half of Yahoo's Alibaba shares for $7.6 billion in 2012. In 2017, Verizon bought Yahoo and sold its remaining Alibaba stock by the end of 2019.

Alibaba's first IPO occurred in Hong Kong in 2007, through which the company raised $13.1 billion.

Alibaba launched Tmall and its cloud computing business in 2008 and 2009.

Singles Day is a holiday started by Chinese university students in the 1990s to celebrate not being married. They chose Nov. 11, or 11/11, as the date for Singles Day.

Alibaba took itself off the Hong Kong stock exchange in 2012 by paying $2.45 billion to buy back the Alibaba shares owned by the public.

That move set the stage for the largest IPO ever.

The Birth of BABA Stock

Four days later, underwriters released more Alibaba stock. That brought the total raised by Alibaba's IPO to $25 billion, making it the largest IPO in history. The next closest, AgBank, raised $22.1 billion in 2010.

The rising price of Alibaba shares reflects its growth, which doesn't appear to be slowing down anytime soon.

For comparison, Amazon grew by 27% each year over that same period.

And the Alibaba growth story continues.

E-commerce produced 80% of Alibaba's revenue in 2020, but its other revenue streams are growing.

And the company's rolling out a service for in-store retail called New Retail. That business line's revenue grew by 128% in 2020.

According to CNN, all 56 analysts surveyed rate BABA stock as a buy. The analysts' median target price for Alibaba stock is $1,939 per share. That represents an astounding 660% gain from today's price.

This expectation comes despite the company's founder, Jack Ma, no longer at Alibaba's helm. Ma stepped down as CEO and chair of the board in 2019.

So far, most of Alibaba's growth has come from China. Since its founding, the company's focused on tapping into the vast and expanding Chinese market.

Now, though, Alibaba's starting to broaden its reach.

In 2016, Alibaba spent about $1 billion to buy a controlling stake in the Singapore-based e-commerce company Lazada. Lazada serves many southeast Asian countries.

And Alibaba's pushing into Europe. The company's investing about $15 billion to expand its European operations, a continent where Amazon currently only has a 10% market share.

Are Alibaba Shares Right for You?

These high prices can scare some investors.

But most analysts expect the company's growth to continue. If Alibaba revenue continues increasing, you might one day be happy to have invested in the company at $200-plus per share.

Of course, with any investment comes risk.

And one risk with buying Alibaba shares is that the company's based in China. It trades on the New York Stock Exchange, but it's headquarters remain in Hangzhou, China.

That means Alibaba's subject to regulations and oversight of the Chinese government, which isn't as transparent as other countries.

Plus, there's some history of Chinese companies falsifying financial reports.

One example is Luckin Coffee. The China-based company overstated its 2019 revenue, a finding which resulted in Luckin getting delisted from the Nasdaq stock exchange.

Still, there's no evidence that Alibaba is not providing accurate information about its business. Buying Alibaba stock doesn't come without risk, but that's true of buying shares in any company.

Patalon considers BABA to be a foundational stock you can build your entire portfolio around.

If you're comfortable investing in a Chinese company, Alibaba might be a smart addition to your investment portfolio.

Visit this page if you'd like to stay on top of the latest in Alibaba stock news.