Looking at Alibaba vs. Amazon is a comparison of two global business behemoths.

Alibaba's revenue in fiscal year 2020 was $72 billion – its highest yet – while Amazon's revenue in the first quarter of 2020 was an astonishing $75 billion. 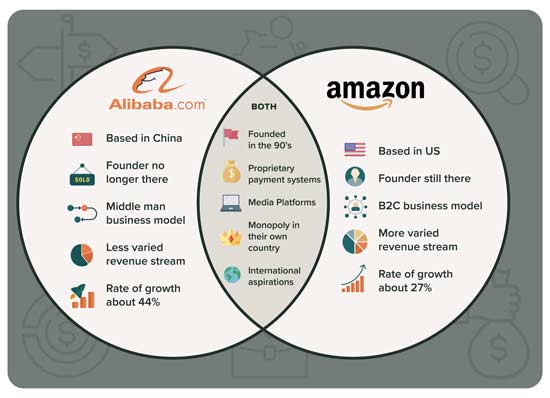 These numbers represent impressive growth. And that expansion is reflected in these businesses' stock prices.

But which e-commerce giant is the better investment?

That's exactly what we'll answer for you today – but first, a little background on these two giants…

In some ways, Amazon and Alibaba appear similar.

Both companies started in the 1990s. And both businesses' founders were men with visions for a new e-commerce business.

Amazon and Alibaba each have their proprietary payment systems for customers. Amazon's is Amazon Pay, and Alibaba's is Alipay.

Both companies operate online media platforms through which they sell products, content, and services. Alibaba and Amazon each dominate e-commerce in their home nations.

And both companies have international aspirations.

But there are many differences between these companies as well. Knowing those variations is crucial to making the right investment decision when it comes to Alibaba vs. Amazon.

While there are similarities between Amazon and Alibaba, there are critical differences between the two companies.

An obvious distinction is where each company is located.

Amazon calls Seattle, Wash., home with a second headquarters planned for Arlington, Va. This location means Amazon is subject to laws, regulations, and taxes of the United States.

Alibaba's headquarters are in Hangzhou, China. That places Alibaba under the Chinese government's observation, which has less transparency and more oversight than the U.S. government.

You see another difference when looking at Jack Ma vs. Jeff Bezos. While Bezos still runs Amazon, Ma stepped down as chair of Alibaba in September 2019.

But the most significant difference between Amazon and Alibaba for investors is each company's business model.

Alibaba is a middle man for most of its products and services. It uses its platform to connect buyers and sellers.

Amazon sells directly to consumers. It uses its platform to help people find things to buy. In fact, by 2018, more people searched for products on Amazon than on Google.

Having different business models impacts every aspect of how Alibaba and Amazon operate. It drives who they're trying to reach, how they make money, and more.

The Differences Between Amazon's and Alibaba's Target Audiences

Who a company sells to, its target audience, is an essential part of a business model.

Looking at Alibaba vs. Amazon, there is a big difference between each company's target audiences.

Amazon is what's called a business-to-consumer, or B2C company. Its target audience is people looking to buy everything from clothes, to household goods, to books and movies.

As such, Amazon devotes resources to attracting consumers to its e-commerce platform. And Amazon owns warehouses holding items that people buy. It even has its own delivery force, including planes, trucks, and final delivery vans.

Meanwhile, Alibaba is business-to-business, or B2B. It focuses on getting other businesses to sell on its platform. And it doesn't deal with warehouses of goods.

A B2B model presents a different sales pipeline for Alibaba vs. Amazon. It can take longer for Alibaba to convince a business to become an Alibaba customer than it can for Amazon to get you to buy detergent on its website.

At the same time, Alibaba can offer more products than Amazon. Alibaba isn't limited to what it can buy and store. Instead, its customer, which is another business, provides products for consumers to purchase.

And that's another key difference between Amazon and Alibaba.

How Alibaba and Amazon each make money differs.

Both companies have diverse revenue streams, but they vary in the specifics.

Amazon makes money from consumers buying products on its website, advertising on its site, and from subscription services, such as Amazon Prime. About 71% of Amazon's revenue comes from e-commerce.

But one of Amazon's most successful enterprises has been its Amazon Web Services, which is a massive cloud server. AWS alone is valued at over $500 billion, which means even if it split from Amazon into a new company, both AWS and Amazon would be in the 10 largest U.S. companies by market cap.

It's a sign that Amazon is continually innovating and expanding its business beyond selling products online.

Like Amazon, Alibaba's revenue is majority e-commerce. But the share of income the company makes from its website is higher than Amazon's. About 86% of Alibaba's income comes from its online platform.

While the company is growing its other revenue sources, Alibaba's still more dependent on its e-commerce business than Amazon. That's not necessarily a bad thing, but you should be aware of it when debating between Alibaba stock and Amazon stock. Be sure to keep an eye on both Alibaba stock news and amazon stock news.

Diving more deeply into each company's revenue streams, we see another crucial difference between Amazon and Alibaba – their fees.

Fees vs. No Fees

We referenced that Amazon makes money from advertising on its website.

That's worth closer inspection, as that's another critical way to differentiate Alibaba vs. Amazon.

Amazon charges sellers fees for promoting products on its platform. For example, a business selling blue jeans can pay Amazon to highlight its pants at the top of related search results.

Amazon charges fees every time a business sells a product through its platform. The costs vary depending on what a merchant sells, for how much, and if Amazon handles shipping or not.

Plus, Amazon charges consumers a fee through its Amazon Prime membership. Prime customers pay an annual fee in exchange for free, expedited shipping and content such as movies and TV shows.

Alibaba doesn't charge fees for businesses selling on its platform. Instead, it lets its sellers pay to rank higher in product search results.

That sounds similar to Amazon, but advertising is a far greater share of Alibaba's revenue than Amazon's. At least half of Alibaba's income comes from selling ads.

Both companies are making money, which is fueling their growth. But how they're growing differs.

It looks like Alibaba is the faster-growing company, but that's not the whole story.

To do so, they're investing billions in expanding into Europe. But Amazon has a head start on that continent, with about 10% of European e-commerce taking place on Amazon.

And Alibaba might face regulatory challenges. Some countries might take issue with a Chinese-owned company operating within its borders. Some nations' governments might levy additional taxes or regulatory oversight for Alibaba to sell to their citizens.

For the most part, since it's a U.S.-based business, Amazon doesn't face the same international trade headwinds that Alibaba might.

On the other hand, Amazon's essentially surrendered China and its 730 million-plus online consumers to Alibaba. Amazon's instead focuses on growing its U.S. operations and expanding into other countries, such as India.

So, which company is growing faster, Alibaba or Amazon?

By most metrics, the answer is Alibaba. Its revenue across the board is growing faster than Amazon's.

And while it's behind Amazon in expanding into Europe, there's still opportunity. After all, Amazon only has about a 10% market share of European e-commerce.

That said, Alibaba doesn't come without risk because it's based in China. While there's no evidence that the company's financial reports aren't accurate, other Chinese companies have had fraud issues.

For example, a research firm found in early 2020 that China-based Luckin Coffee overstated its 2019 revenue. The finding resulted in the company's delisting from the Nasdaq stock exchange.

Which leaves us with the question, which should you buy, Alibaba stock or Amazon stock?

Which Should You Invest In?

Deciding between Amazon stock or Alibaba stock depends on your comfort with risk and price.

Of course, the share price doesn't reflect value. And with fractional trading becoming more popular, Amazon's share price shouldn't hold you back from investing in the company.

Money Morning Executive Editor William Patalon, III, calls Alibaba a "foundational buy" and a "one-stock wealth machine." He says a savvy investor can build their entire portfolio around Alibaba stock. It has that much potential.

But that doesn't mean Amazon is past its prime either. Shares of Amazon are up 68% on the year, an incredible run for a stock that's already made many of its shareholders rich.

When investors ask Money Morning Defense and Tech Specialist Michael Robinson if it's too late to buy Amazon, he has a very simple answer: "Absolutely not."

Amazon isn't content being a simple e-commerce website. The company continues to innovate, with its massive cloud computing business and savvy acquisitions of upstarts like PillPack, there's no ceiling for the company.

Investors choosing between Amazon and Alibaba can't go wrong with either.