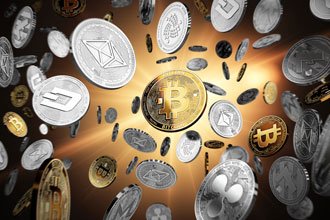 Bitcoin (BTC) is hands-down the best cryptocurrency to own for the long haul, but alternative cryptocurrencies (altcoins) are making some incredible buying opportunities in 2021. In this article, we've narrowed them down to the three best altcoins to buy now.

Over the last year, Bitcoin is up 307%. So, it's quite the benchmark to try and beat - especially with these 2021 Bitcoin price predictions.

But with 8,326 altcoins in existence today, there's a very good chance that some are going to outperform Bitcoin this year... One could even return 538% by my calculations in 2021 alone.

I've been studying this space intensely since 2016 and have read the whitepapers of about 50 different altcoin projects.

My conclusion: While the vast majority of these projects won't be worth anything in the long run, a handful will.

Bitcoin will be the preferred currency of the Internet, but others will carve out a nice niche for themselves along the way.

There's no getting around the fact that every cryptocurrency out there is highly correlated to Bitcoin.

Every time Bitcoin surges, many investors can't help themselves but take some of their profits and diversify them into altcoins.

The world's largest altcoin, Ethereum (ETH), is up 770% in the last year - just as one example.

Ethereum is a decentralized finance (DeFi) token that can be used to build a variety of things designed to run without any downtime, fraud, control, or interference from a third party.

But with a $150 billion market cap, ETH will have a harder time generating similar returns moving forward.

Fortunately, there are a few other promising DeFi tokens like it that are a fraction of the size and still have the potential for massive returns.

Here are my three best altcoins to buy now that have the greatest potential of outperforming Bitcoin and Ethereum throughout 2021 and beyond...

Polkadot's primary goal is to establish a fully decentralized and private web, which is controlled by the users.

It's is an open-source multichain protocol that facilitates the transfer of any data or asset.

Ultimately, what gives Polkadot value is its ability to make a wide range of blockchains interoperable with each other.

What makes Polkadot unique is its "sharded multichain network." This means the DOT blockchain can process many transactions on several chains in parallel.

Polkadot has certainly captured the attention (and money) of investors as it is currently the fourth largest cryptocurrency in the world with a $16 billion market cap.

In the last 24 hours, roughly $3.2 billion worth of transactions have been conducted on the DOT blockchain.

Nine hundred and four million Polkadot coins currently exist at a price of about $17.76 per DOT.

Over the last year, DOT is up 557%, and it could very well continue that momentum throughout the course of 2021.

Before the end of the year, it wouldn't surprise me to see Polkadot eclipse $50 per coin. That represents a potential gain of 181.5% for investors.

Founded by another Ethereum co-founder named Charles Hoskinson, Cardano (ADA) is a proof-of-stake blockchain with the goal of creating a society that is more secure, transparent, and fair for everyday people.

The Cardano Foundation is a nonprofit organization trying to help individual investors like you and me gain an edge on the corporations and governments that are rigging the financial system in their favor.

Cardano is what's known as a third-generation cryptocurrency. It's a smart contract platform that is taking the best features from Bitcoin and Ethereum and linking itself to the mainstream finance ecosystem through its two layers - the Cardano Settlement Layer and Ouroboros.

Read more about it here.

Investors seem to believe in the project enough, as they've pumped ADA's price up 719% over the last year. That makes Cardano the sixth largest cryptocurrency in the world with an $11 billion market cap.

Investors with a longer time horizon could be rewarded even more handsomely...

One Cardano price prediction from a company called Prime XBT thinks ADA could reach $12 per token by 2025. That's represents a potential 3,329% return for investors from current levels.

Founded by Sergey Nazarov and Steve Ellis, Chainlink (LINK) is a decentralized oracle network aiming to connect smart contracts with data from the real world.

Smart contracts are agreements made between buyers and sellers that automatically execute according to the lines of code written once the desired outcome happens in real life.

For example, let's say you and I bet 100 LINK using a smart contract on the outcome of the Super Bowl, and you won... The 100 LINK would pay out to you immediately after the game ended. You don't have to take the risk that I decide to leave town and not pay you.

Bridging the gap between blockchain-based smart contracts and real-world applications is valuable for companies using big data to make educated predictions on the future.

Chainlink is currently being used by Alphabet Inc. (NASDAQ: GOOGL) to do just that right now.

In the last year, LINK is up 872%. And investors are quite optimistic 2021 could be quite prosperous for the DeFi

My Chainlink price prediction for 2021 is $150 per LINK. That represents a potential return of 538% for investors who buy today.

The best part is... Polkadot, Cardano, and Chainlink aren't the only ways to make money in cryptocurrencies.