Duh on you if you bought the Facebook IPO.

Double duh if you're thinking of buying Facebook stock now that it's fallen to $32 a share and lost $17.16 billion off its initial $104 billion valuation.

The company is only worth about $7.50 a share. And, no. That's not a typo. There is no missing zero or a placeholder.

That's reality. What is ludicrous is that Morgan Stanley and Facebook executives thought the company merited a $104 billion valuation at 100 times earnings.

As my good friend Barry Ritholtz pointed out recently, both Apple (Nasdaq: AAPL) and Google (Nasdaq: GOOG) debuted at about 15 times earnings. Today they trade at 13.6 and 18.2 times earnings and 3.75 and 4.9 times sales respectively.

So what should the numbers be?

Try this on for size. If we use Google's price to sales ratio of 4.9 (and I am being generous here for discussion purposes), that equals a total market cap of $20.24 billion or 76.68% lower than where it's trading today.

No doubt I'll get the evil eye from the Facebook faithful and Morgan Stanley for saying this, but think about it.

Revenue is already slowing and the company does not and cannot possibly dominate the mobile markets that are becoming the preferred channel for millions of people.

Worse, startups are already cannibalizing Facebook's user base as concerns over privacy and who likes who mount.

Companies like General Motors (NYSE: GM) are deciding not to renew their advertising. This is going to hit Facebook to the tune of $10 million a year for the loss of GM alone.

More will undoubtedly head out the door for the same reason, since Facebook friends don't necessarily translate into revenue.

Corporate buyers are beginning to figure out that advertising on Facebook is simply not cost effective versus other media alternatives - gasp - including good old fashioned television and radio advertising, billboards and tradeshows.

Facebook Stock: At the Mercy of the Merely Curious

Many people think this isn't a big deal. They couldn't be more wrong.

Facebook serves up its ads while you're kibitzing about your latest trip or checking out pictures of your family's newest arrival. This is very different from how Google works, for example.

Google's adverts appear after a customer has already entered search terms and refined the results they want to see. Facebook's approach is like pissing in the wind and about as effective.

In practical terms what this means is that Google search advertisers know that those who click on their ads are already hunting. So they're willing to pay a few hundred dollars to acquire a paying customer.

Facebook advertisers, on the other hand, are at the mercy of the merely curious. That means the acquisition cost can be dramatically higher, perhaps even into the thousands of dollars.

There are very few business models and products where that kind of marketing expense is "worth" it.

According to the technology savvy wunderkids at Facebook, "likes" are supposed to open up a magnificent relationship between prospective customers and the brands they "like."

Maybe this worked at Harvard when you were talking about bars, people and local hangouts but I don't buy that it's going to translate into real sales. So what if you become a company's friend?

When you "like" something, you get a stream of information from the "likee" that appears on your personal Facebook wall.

Go on a "like" binge one day and suddenly you've got 20 or 30 streams of information coming in right next to pictures of your hot rod buddies or school chums.

Over time, what happens is users tend to block out these streams in yet another never ending battle to screen out visual vomit, thereby robbing companies of the very connection they crave.

Your initial "like" never goes away, but depending on the barrage of information you receive I submit that brand negativity actually builds up.

If I "like" a genre-specific museum that's just opened up in town, I don't want to see totally unrelated posts about nearby milkshake parlors issued by the museum in a pathetic attempt to keep their brand front and center on my "wall."

The real measure of any business is how it handles the "dislike" button - but Facebook doesn't offer that.

According to the marketing cognoscenti and my own personal experience, most of the companies that advertise on Facebook are far below the 3-4 interactions a week needed to prompt a customer response. That is, unless you count the four-letter words every time I get an irrelevant "story" posted to my wall.

It's no wonder to me that very "unsocial" networks are already wiping the shine from Facebook's apple. 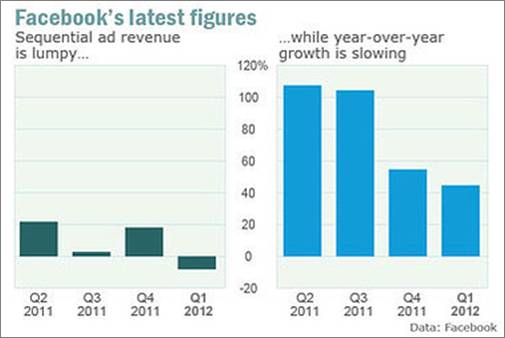 I think Facebook's valuation is the least of its worries. The blame game now underway is only the tip of the iceberg.

Morgan Stanley, Goldman Sachs (NYSE: GS) , Facebook and the Zuck himself are being sued over the IPO, according to a slew of papers filed in the U.S. District Court in Manhattan Wednesday morning.

At issue are material reductions in the company's revenue forecasts that were selectively disclosed to preferred investors as opposed to the investment community at large, as required by securities law.

Also at issue is the fact that a single Facebook executive may have communicated this information verbally to institutional investors but, again, not to every investor. That's a big no-no.

Talk about irony, though.

Facebook represents itself as ushering in a new era of transparency, openness and connectivity. If these allegations are true, the company could not have been more two-faced.

I've been involved in Wall Street and its IPOs for more than two decades and I have never seen something like this. It's unprecedented, especially when it comes to material revenue projection reductions during the company's pre-IPO roadshow.

So far individual investors are just getting warmed up.

Phillip Goldberg, for example, filed a complaint in Manhattan federal court against NASDAQ OMX Group, Inc. saying the exchange acted negligently in its widely publicized mishandling of the Facebook IPO.

Goldberg, who is based in Maryland, apparently wants to represent a class action lawsuit on behalf of investors who lost money because their orders were not properly handled.

I'd love to buy Facebook put options. But I can't. There aren't any and estimates suggest there won't be any made available until May 29th at the earliest.

I'd also love to short Facebook stock. But I can't do that, either.

My broker tells me the stock is on the restricted list, meaning the security cannot be borrowed nor delivered in such a way to consummate the transaction.

So, I'll just sit back and watch the fireworks for a while.

Come to think of it, $7.50 a share is still rich for a company that doesn't know what it wants to be when it grows up.