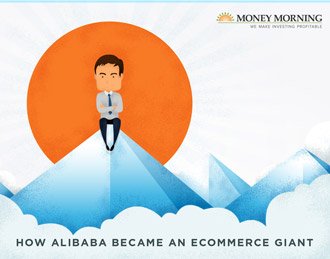 As one of the world's foremost e-commerce machines, Alibaba sought to transform the way people buy and sell, giving merchants, brands, and other businesses access to the technology they need to operate with more efficiency and engage with their customer base in a beneficial way.

With their business centered around sectors like cloud computing, digital media, and entertainment, Alibaba has created an innovative platform that serves everyone. And with lofty goals of serving 2 billion consumers worldwide, they are poised to make big e-commerce impacts.

But how did Alibaba arrive where it is today?

Under the powerful eye of founder and former executive chair, Jack Ma, Alibaba grew from a small online storefront in Hangzhou to become China's largest digital retailor in just 20 years, capitalizing on the over 700 million people that are online in China.

Of course, there is so much more to the story of Alibaba's history and how it got to where it is today – and how that may affect its future. Read on to learn more about its meteoric rise and Alibaba stock news that's relevant today…

Alibaba started small, but with a big belief that the Internet was an ideal place for smaller businesses to capitalize on an online platform aimed at helping them grow and even compete both nationally and internationally, and with larger enterprises.

1999: Alibaba began with founder Jack Ma and 18 others – in Ma's apartment – as a small, English-language website aimed at helping Chinese exporters, manufacturers, and entrepreneurs who wanted to extend their sales to an international market.

After successfully attracting the support of investors, Alibaba started defining who it was – its mission and values – and of course, it continued to build its base of registered users.

Taobao became a boon for mom-and-pop retailers who sell just about anything you can imagine. Alibaba profits from their membership and advertising fees, and commission on sales.

2005: Alibaba made a strategic move when Yahoo bought 30 percent of the company for a whopping $1 billion, which would later be sold in 2012.

But Alibaba history certainly doesn't stop there, as Jack Ma had his sights set on an IPO on the Hong Kong Stock Exchange… and more.

The Beginnings of Alibaba Stock History and AliExpress, 2007 to 2011 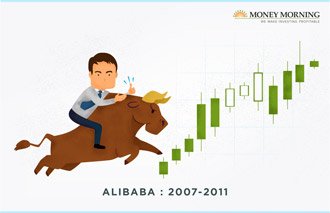 2007: In November 2007, Alibaba.com completed its IPO on the Main Board of the Hong Kong Stock Exchange, with shares opening at HK$30, far more than the issue price of HK$13.50.

And the growth only continued with Alibaba shares rising more than 192% in its first day, nearly overwhelming the trading system.

Tmall (Taobao Mall) was created as a complement to Taobao Marketplace, quickly and easily connecting retailers and consumers (B2C) to become the largest such platform in Asia.

Tmall's incredible success can be attributed to its spectacular user experience (UX), which allows customers to easily search for specific products, or categories of products, to find exactly what they need.

2009: Additionally, Alibaba Cloud came onto the scene in 2009, just 10 years after Alibaba launched in Jack Ma's apartment, quickly followed by Juhuasuan and AliExpress in 2010. Juhuasuan served as a sales and marketing platform for flash sales, while AliExpress served as the global consumer marketplace division of Alibaba Group.

AliExpress is similar to Amazon, but many consumers find the prices to be far cheaper because the sellers are based in China and sourcing Chinese-manufactured products. Shipping is known to be quite inexpensive, which makes it an attractive place for consumers to shop.

September 2014: Probably one of the biggest news stories for Alibaba Group, and a huge moment in Alibaba history, was the day it went public on the New York Stock Exchange. With its $25 billion IPO, the largest IPO ever, ending its first day at $93.89 per share, a 38% gain, exceeding other technology giants like Facebook and Google.

2016: By 2016, Alibaba Group was soaring, leading it to become the largest retail economy in the world, exceeding RMB3 trillion in FY2016 gross merchandise volume (GMV) in Chinese retail marketplace.

Alibaba Group continued to acquire other platforms like Lazada (which it would increase its stake in in 2017), and rounded out 2016 with the official announcement of Alibaba Digital Media & Entertainment.

2017: This year brought many milestones in Alibaba history with the formal introduction of a partnership with the International Olympic Committee (IOC) to last through 2028, the launch of Tmall World, and the unveiling of Freshippo (Hema) supermarket.

With Freshipoo, customers simply download an app that links to their current Taobao or Alipay account so they can easily shop within close proximity of their homes, ensuring speedy service. 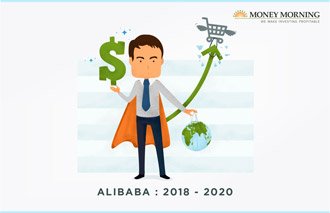 2018: As Alibaba history rolls into 2018 and 2019, its growth continues exponentially. With growing investments in Lazada, acquisitions like Ele.me and Daraz group, and partnerships with world governments, Alibaba Group seemed poised to emerge as a retail superpower.

It also continues work with education institutions for research purposes, including a partnership with Tsinghua University to establish a research lab focused on the experience of human-computer interaction. It also established the Luohan with Nobel Laureates and leading scientists.

But one of the biggest changes for Alibaba Group in 2018 was when Founder Jack Ma announced he was stepping down from his position as Executive Chair of Alibaba Holding Group Ltd. This announcement immediately caused the stock to drop 5%, but that drop is a mere footnote in Alibaba stock history as shares are up nearly 100% since the end of 2018.

2019: As with 2018, 2019 saw continued growth and acquisitions, partnerships with governments to establish eWTP Hubs (electronic world trade platform for cross-border trade and logistics support), and a revamp of its six core values to celebrate its 20th anniversary.

Alibaba Group ended the year when it was listed on the main board of the Hong Kong Exchanges and Clearing Limited, becoming one of the largest offerings in 2019, alongside Uber and Saudi Aramco.

The Alibaba stock price history shows consistent gains, but recent delistings for other Chinese companies, like Luckin Coffee, make people question whether Alibaba could be next.

But we're not worried. Here's why Alibaba is a one-stock wealth machine for your portfolio.

To find out how you can get the name of these 20 stocks, click here now…