Immortality is possible. It occurs in nature. In fact, scientists have already identified nine animals that live forever. 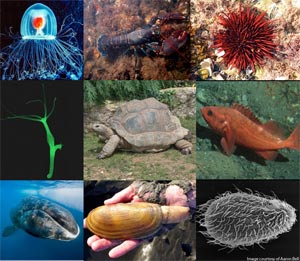 Some of them you probably know.

Below we’ve identified some animals that live forever – and what they can teach us about the so-called “immortality gene.”

Animals That Live Forever No. 1: Lobster

As lobsters get older, they continue to grow larger, stronger, and more fertile.

Aging is not a death sentence for them.

In fact, there are only two main ways lobsters die: they get eaten or they grow so large their own shell kills them.

This demonstrates that if you removed outside threats – lobsters can nearly achieve immortality.

“The more scientists look, the more they find species that appear to be able to defy the aging process,” biologist Simon Watt told The Daily Mail in September 2013. “These species of course still die. They get diseases, they are injured or hunted. But unlike humans, they don’t die as a result of their own metabolisms — there doesn’t seem to be a built-in life expectancy in their cells.”

The Turritopsis dohrnii [Tory-Top-Sis Dorn-Eye] is a type of jellyfish.

Anytime it gets sick or injured, it sinks to the ocean floor, transforms back into a polyp, and reemerges as a newborn. It biologically turns back the hands of time.

“The Turritopsis dohrnii is able to revert their life cycle, usually through formation of temporary resting stages,” according to 2007 research led by marine biologist Dr. Maria Pia Miglietta of Notre Dame University, published in the Journal of Zoological Systematics and Evolutionary Research.

Dr. Miglietta expanded on the details of this unusual “life cycle” in an April 2009 paper for Biological Invasions.

“The normal life cycle of hydrozoans involves the asexual budding of medusae from colonial polyps. Medusae of Turritopsis, however, when starved or damaged, are able to revert their life cycle, going back to the polyp stage through a process called transdifferentiation.”

Scientific jargon aside, the bottom line is that without predators this jellyfish is part of an exclusive list of animals that live forever.

“These red sea urchins appear to be practically immortal," Thomas Ebert, a marine zoologist at Oregon State University told Science Daily in November 2003. "They can die from attacks by predators, specific diseases or being harvested by fishermen. But even then they show very few signs of age. The evidence suggests that a 100-year-old red sea urchin is just as apt to live another year, or reproduce, as a 10-year-old sea urchin."

The case of the red sea urchin, and these other developments in the animal kingdom led Dr. Kevin Peterson, a molecular biologist at Dartmouth to make a very important observation.

“Immortality might be much more common than we think,” he said.

Animals That Live Forever No. 4: Humans

We humans all have an immortality gene hidden inside our DNA.

After decades of experimentation and recent, human clinical trials, doctors have developed a treatment that could allow us to switch our immortality gene on.

Doctors at Harvard, MIT, Penn, Scripps, and Johns Hopkins are developing a treatment that could be the first step toward a permanent cure for mankind's most deadly disease: Aging.

Dr. David Sinclair of Harvard's genetics department, in light of recent medical breakthroughs, said "There is no limit on human lifespan."

While the research is ongoing, it promises to unlock the answer to the question: “Is it possible to live forever?”

We may soon be joining the lobster and the red sea urchin as animals that live forever.

Continue here to find out how to get "Unlocking the Immortality Gene," our in-depth report on this game-changing new treatment that could be the key to living forever…