Recent selling has been as brutal as it has been sustained, minus just a couple of days. Many investors are scrambling to figure out how much "more" they can take.

That's not a bad thing.

Panic is a perfect contrarian indicator.

History shows very clearly that this sell-off will eventually prove to be a monumental buying opportunity – perhaps even, dare I say it, a generational play the likes of which you see once or perhaps twice in your investing lifetime.

Start thinking about this possibility now, and you'll have a huge advantage when the time comes. You just need the right tactics.

Use These Strategies to Profit from the Bottom

The first thing you'll want to focus on is when to make your move.

I suggest watching the VIX – the market’s volatility index, which you may have heard referred to as the “fear gauge.” Look for a sustained fall using an indicator like "Relative Range," which I'll show you in the following chart.

The values are less important than the break above statistical norms and the high of 49.48. 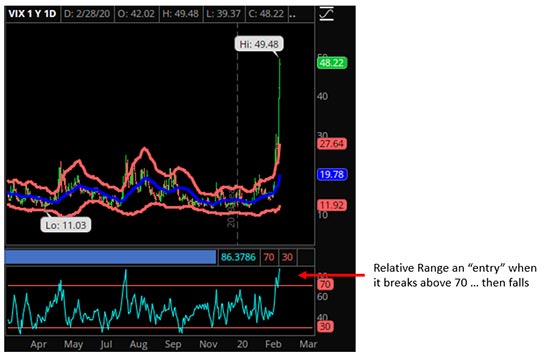 As you can see, volatility has broken well above anything even remotely resembling rational behavior under normal statistical conditions.

The "why" doesn't actually matter, so don't spend a lot of mental energy on that. Just that it has happened is what you want to focus on.

The VIX Index, in case you're not familiar with it, is a calculation measuring the expected volatility of the U.S. stock market based on real-time, mid-quote prices of S&P 500 Index (SPX) options.

Generally speaking, VIX readings do not remain higher than normal (which for the past few years has been low- to mid-teens) for long periods of time, for statistical reasons I'll go into another time. What you need to know is that high VIX readings can fall quickly.

It's because of something called "mean reversion." That basically signals a return to the mean every time the VIX moves sharply in either direction.

Keep in mind, though, you'll want to be selective because the VIX can spike at times that do not match up to a steep sell-off or a possible low. Those are signals you don't want to take. It can also drop even though angst remains high, like it is presently.

Generally speaking, abnormally high VIX readings can be used to judge the potential for a major market reversal… which, I submit based on what I've just laid out, may be closer at hand than many panic-hazed folks think.

And here's what you do to play that…

Aggressive traders could tap into that by purchasing "at the money" (ATM) S&P 500 calls, ATM SPX call options, because Gamma – an option Greek measuring price sensitivity – is highest.

Conventional thinking is to buy "out of the money" – OTM – call options, but I'm not a fan of that generally because this trade is intended to capture as much of the move as possible as fast as possible.

Keep risk low by using a smaller-than-normal position size before you make your move, though. This trade will lose money quickly if the markets keep going south. I suggest a time-based stop, rather than the usual dollar or percentage versions we talk about most of the time.

You're also not out of luck if you don't like options or simply aren't familiar with 'em.

Aggressive investors could consider nibbling into the SPY, an exchange-traded fund that tracks the S&P 500, while using dollar-cost averaging to control your entry and your risk. There's also a leveraged ETF like the Direxion SHS ET/Daily S&P 500 Bull (NYSE: SPUU), which moves 2x to any corresponding move in the S&P 500 if that's more your "speed."

This, too, is a one-trick pony, so the same risks apply. Only use money you can afford to lose if the markets have other ideas.

A lot of people talk about being contrarians, but very few really live up to my definition.

Those few folks who buy even when every bone in their body tells them not to – or in the case of a few excellent traders I know, they're physically sick.

Which is: This past week certainly qualifies. Both of the individuals I'm thinking of fell ill, then started buying Apple, Alibaba, and other major tech stocks using LEAPs call options.

LEAPs stands for "long-term equity anticipation securities" – basically long-term options with expiration dates typically longer than one year away. Doing so, as opposed to buying the stocks that interest them directly, costs less money and can deliver super attractive profits if there's a turnaround.

Let's assume that Apple rises to $400 by June 2022 like I think it could. A stock buyer would be happy no doubt, basking in the glow of a 49.11% return. But the LEAPs buyer would be looking at a much more appealing 64.68% for every LEAPs call purchased.

There are some caveats, though.

LEAPs buyers have to contend with something called time decay, meaning that the value of the price of the option they've purchased declines as the option moves toward expiration. At the same time, they'll have forgo dividends that would otherwise be in their pocket if they purchased the stock outright.