Why not reach for it right now?

I believe Team Cupertino will make one on the biggest business pivots of all time within the next 72 days - by year's end 2017.

You can bury your head in the sand and ignore it - and miss out on millions...

You can keep investing the way you always have - and trust that Wall Street will do the right thing...

Or, you can take control over your financial destiny - as the company creates another $1 trillion in wealth.

Millions of investors think of Apple Inc. (Nasdaq: AAPL) as a device company, which is why they fawn over every new iPhone release, hyperventilate when a new MacBook comes out, and go bananas when the next generation iPad launches.

In reality, Apple hasn't been that company for years.

Behind closed doors, the company has been driven by the ecosphere since at least 2010, in a shift that's only just now becoming apparent to the public.

Many investors - present company excluded - think they've got this covered, but I'm not so sure.

If they did, then they wouldn't be fawning all over the latest iPhone releases, nor would they be hyper-concerned about talk of poor sales and supplier problems, as was the case Thursday when Apple's shares got pounded.

The fact that traders and investors are willing to speculate over such a short-sighted news item tells me that they still don't see the big picture like we do. It also tells me that they have no idea what the ecosphere actually means for Apple, let alone how valuable the company will become.

Trash-talking news about this Apple supplier or that one has plagued Apple since the dawn of time. More to the point, it's kept retail investors out of one of the greatest stocks in the history of financial markets. Again, present company excluded.

Apple's already the single largest wealth creator in the history of the stock market by virtue of the fact that it's created more than $1 trillion in wealth for savvy investors. Every $10,000 invested when the company IPO-ed is now worth a jaw-dropping $3,183,690 as of last night's close.

That pales in comparison to Apple's next move.

Here's what I see happening.

A Fundamental Shift to Unlock Trillions in Revenue

The conventional wisdom is that companies create value by selling products and services the world wants - which is why investors become so hyper-focused on gee-whiz devices.

A company's business strategy is where the real value-add comes in. It's why Apple is what it is today and why FitBit Inc. (NYSE: FIT) and GoPro Inc. (Nasdaq: GPRO), for example, struggle to remain relevant in hotly competitive markets that are rapidly leaving both behind.

That's a good part of why I continually reinforce the need to pay attention to CEOs as a part of the investing process, especially if what they're doing unlocks a new dimension in revenue and profitability.

Take PayPal Holdings Inc. (Nasdaq: PYPL), for example. Co-founders Peter Thiel, Max Levchin, and Ken Howery founded the company as Confinity and originally made security software for handheld devices. Confinity merged with X.com and then made the pivot to online payments when then-CEO Elon Musk made the decision to terminate all other Internet banking operations. PayPal joined the Fortune 500 in June 2016 and generates $10.84 billion in annual revenue today.

Or Google - now Alphabet Inc. (Nasdaq: GOOGL). Founders Larry Page and Sergey Brin had no apparent business strategy in the company's early days when it lurched from one idea to the next. Believe it or not, Google sold appliances back then, and even its own search technology to other websites. In 2003, the company made a pivot to AdWords that allowed companies to pay for advertising based on search terms. Google generated more than $20 billion in 2008 and today, as Alphabet, maintains a top line of $90.27 billion.

Then, there's Facebook Inc. (Nasdaq: FB). It's hard to imagine today with 1.3 billion daily active users, but Facebook used to be a "secret society" open only to those with .edu addresses from Harvard and a handful of other universities. Then, in 2005, CEO Mark Zuckerberg controversially pivoted to high schoolers and subsequently the following year to anyone over 13 years old. Today the company generates $27.64 billion a year and has created an estimated $805.6 billion in wealth for investors worldwide.

You get the idea.

My point is that business strategies are not footnotes as most investors think. Rather, they are deliberate, fundamental shifts intended to open up entirely new business models and revenue streams.

Which brings me back to Apple.

One of the biggest problems Apple has is that it's got to charge increasingly higher prices for its products in order to maintain its profit margins at a time when high-tech devices are being commoditized. Eventually, they're going to run out of customers who can drop $1,000 on a phone or iPad or a fancy watch.

The reason why is pretty straightforward - "things" are progressively worth less in today's world, while infrastructure is worth more. 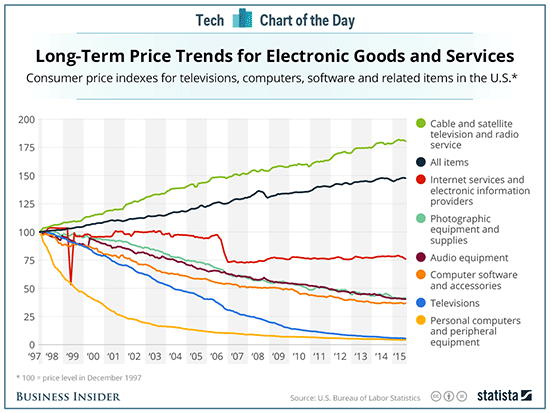 I think CEO Tim Cook knows this very well, which is why he's spending hundreds of millions of dollars moving towards the infrastructure end of things via the ecosphere. And, why he's going to make the pivot very shortly...