And now Amazon is in limbo - and waiting for stipulations to be placed by the U.S. government.

This coupled with the absurd volatility in the U.S. equity markets has not bode well for AMZN through the month of March - including a 6% drop in its share price.

But regardless of the political rhetoric surrounding the online retail giant - my Money Calendar is flashing some interesting numbers about the future of this stock and is even suggesting a potential profit opportunity...

A Battle for the Ages: President Trump vs. Amazon

This isn't the first time Trump has voiced his distaste for Amazon and their business practices. Long before he took to the oval office, Trump was sharing his opinion on the e-commerce giant.

But most recently, the president took to Twitter to express his concerns.

The president argued the Amazon has an unfair advantage over most traditional retailers in the way the business handles sales tax on purchases.

Last year, Amazon started collecting a sales tax on products it sells directly to consumers in states that levy them. But, the further concern for some of the competition is the unfair advantage they see Amazon as having in regard to the policy for third-party vendors.

And while the president is calling for a price hike from the United States Postal Service - the likely outcome is that there won't be much of an increase to Amazon's shipping rates, at least not right away - and it won't come from Congress.

Can a Single Book Make You a Millionaire? This book will show you how you can amass $1 million or more. And you only have to "work" in practically effortless 10-minute increments once a week! Claim your free copy...

The U.S. Postal Service sets the rates for Amazon - and the company is one of their biggest customers. The looming fear of Amazon creating its own internal delivery system, or using a combination of smaller delivery services, sits in the back of its mind.

And while the president's efforts may have been to throw Amazon into hot water - from an investor standpoint, the president may have created the perfect buying opportunity.

So What Does This Mean for Investors?

From my point of view, it's as if investors in AMZN wanted to lighten their stock load until they have a better sense of what's happening with the company.

Right now, it seems a lot is up in the air for the retail giant - but in reality, it boils down to three main reasons to why investors are taking profits and pulling back on holdings...

But it doesn't appear that this selling was done in enough of a widespread panic mode, because Amazon stock simply pulled back to its previous price point.

As you can see below, this reversal that happened last Wednesday could become a double-bottom price support at $1,350. 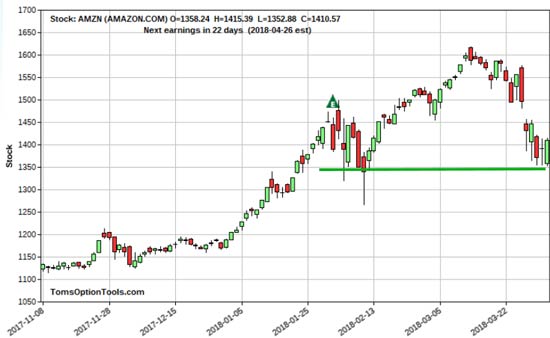 Another technical view is that the stock at $1,350 is at a key Fibonacci retracement level, the 38.2% level, which many technical traders of stock or options like to use as support. Fibonacci retracements are ratios that are used to spot potential pullbacks or corrections. This can be used to predict when and for how long a pullback will happen in the markets. 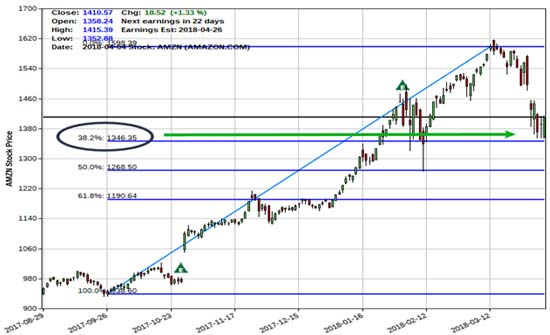 What the stock needs to see now is what's called "follow-through days."  In this case, AMZN has been in a downdraft, and last Wednesday's bullish reversal day happened, but we need to see another day (or more) where the stock keeps moving higher. And if it can do so on increasing volume, all the better.

Here's How to Grab a Possible Profit on This Retail Giant

Now, Amazon is slated to release earnings on May 3 after market close. With that said, there are a couple ways you could play this...

While a few patriots may be justified to indict politicians, Tom is one who is helping who he can to rise above the treasonous, no matter their prattle! & yes, Dr.Savage, those who choose wrongly are self-afflicted w/mental disorder!! ("liberals"!)