Predicting the point at which an index switches directions is an inexact science - unless you've got math on your side.

And in this instance, thanks to our friend Leonardo de Pisa - creator of the Fibonacci sequence - we're potentially zeroing in on some pretty substantial information.

On the markets, traders use Fibonaccis - also called Fibos - to determine points of support and resistance on an index.

Look, it's no secret that most people don't love math.

I get that, it's not exactly sexy. But, that's one of the reasons you have me in your back pocket as your handy, technical-trading pal.

Take a look at this chart...

These are the Fibos of the Invesco QQQ Trust Series 1 (QQQ) - from the pandemic bottoms to the top that we saw in November 2021.

Math to some, art to others, when applied to trading, Fibos carry big implications by more or less setting the price at which buyers or sellers start to act.

Take note of $287.56 - that's your magic mark for your 50% retracement. It's the halfway point between those aforementioned highs and lows and is reflected on the above chart as the horizontal purple line.

These retracements are particularly important because a lot of traders are waiting for its signal to move.

That is the big test - the final exam if you will. You know my rules: one time above that retracement point is an event, two times makes a break, and three is a trend. If we don't close above the 50% Fibonacci retracement level, you're going back to the bottom.

If it does close above 50% and continues the larger trend, we are in for one hell of a rally. There has never been a bear-market rally that closed above the 50% Fibonacci that subsequently went on to make new lows.

Now, as of Friday, we did close above the 50% retracement. So, if we see that three times, we should expect the market to continue its run higher. If we dip back down, then we are sliding deeper into the acceptance phase.

It's exciting. It's even a little nerve-wracking, especially considering the QQQ is currently trading extremely close to that 50% mark. 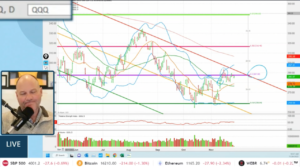 This is just another piece of evidence, on top of the 50-day moving average (50MA), the open-interest configuration, regression channels, and a host of other things, that this market is seriously congested in this tight trend.

That takes care of the math, but there's a psychological component to this congestion, too.

Almost all of the money is sitting on the sidelines. The only dollars moving are going from one index to another - e.g., energy to tech and back to energy.