Editor's Note: The U.S. Federal Reserve was created in 1913 to provide a safer and more stable monetary and financial system. These days it follows a more sinister mandate, which Shah explored back in 2014. Here's what he found...

It's maddening. The divide between haves and have-nots is widening every day. There are fewer and fewer good jobs and careers to be had.

What the heck happened?

The U.S. Federal Reserve System is killing America. It has destroyed the economy. It has undermined savers and retirees. It is even responsible for the corruption in Congress.

We have to kill the Federal Reserve before it kills America for good.

Okay, there is one reason...

The Only Reason the Federal Reserve Exists 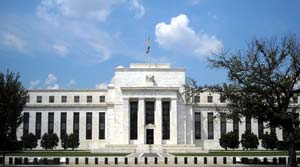 There is no other reason for the existence of the Fed. None.

Central banks exist to backstop banks. They were all created by bankers to serve them.

When banks get into financial trouble (for any number of reasons, all of them having to do with their bad management and greed), if there is no backstopping angel with unlimited (completely made up out of thin air) resources to bail them out, they would shut down.

But if banks were allowed to fail, given they were each, on their own, insignificant enough to the financial system - to the whole economy - that they could fail without doing economic damage, they should be allowed to fail. Small banks are still allowed to fail based on this exact principle.

But clever bankers, the masters of the biggest banks in any system (in the United States it was a group of the most powerful banks in America and allied banking interests in Europe in 1913), figured something out - and the result has been profound.

They figured out that if they got so big that any one of their failures would result in contagion and undermine the financial system and the economy, then they could convince governments to create central banks to safeguard systems and economies.

The Federal Reserve was legislated into existence in 1913 precisely to backstop America's biggest banks. The history of exactly how the Fed came about and who was involved in the secret meetings at J.P. Morgan's private island to design the "System" (they didn't use the term bank because they wanted to imply a safety "system" and not raise the ire of the public, who were fearful and skeptical of the big banks that were already running the country) is one of America's greatest cloak-and-dagger stories.

The true tale is laid bare in an extraordinarily well-researched and documented book "The Creature from Jekyll Island" by G. Edward Griffin. Read it.

Without getting into the weeds on how it mechanically does it, it's instructive enough to know what the Federal Reserve does. In a nutshell, all its "regulatory" duties aside, the Fed prints money and gives it to banks.

That's right, the Fed - not the U.S. Treasury - creates dollars. The Treasury actually prints dollars and mints coins, but it only does enough of that to keep a certain amount of currency in circulation. The creation of money comes from the Federal Reserve System.

Look at your dollars, any of the bills in your wallet. They don't technically belong to the Treasury. They say right up top: "Federal Reserve Note." It's Federal Reserve money. But the Fed doesn't have to have the Treasury print money to give it to banks. It just credits banks electronically. And, like magic, banks have money when they need it.

Here's How the Fed Is Killing America

So why can’t we stop using the federal reserve money? And it really pisses me off that every has obviously known about this fake money. From my grandparents to my parents and now me just learning this. And I feel betrayed by everyone.. I feel betrayed by the federal government and the local government.. And the local government are my neighbors..That live in my community.. My state my county… And the fricken school teachers should of told us this. Back in school.. So basically they have been laughing at us? Because they had to of known.. Talk about credit scores? Or lose your home if u can’t pay the taxes? When it’s all fraudulent, Shut your power off if you can’t pay your power bill? Give u a fricken ticket for not having insurance on your car? And people go to jail for this fake money system.. And it’s worthless!! So I say it’s ok to steal what I need from the stores. Because we all no they charge us way to much for everything.. Giving a 90 day warranty is wrong.. And if someone runs out of the store with food. Good for them.. Buying houses to rent out? Well no wonder the neighborhoods look like crap.. I’m just sayin.