Editor's Note: Since Shah first broached the student loan issue with his readers, debt burdens have soared to $1.5 trillion, up from $1.2 trillion. That staggering 25% increase in just over three years makes this updated exposé more important today than ever before. Here's Shah…

Here's a question for you: Has higher education become another great American scam?

I'm not talking about the rich getting scammed. They get what they pay for. They can afford to be scammed – they know what's up.

A lot of rich people send their kids to expensive private colleges hoping they'll get a good education that will lead them into their chosen careers. If they haven't chosen a career, rich parents are more than happy to give their kids the "experience" of college, with all its social aspects, country club accommodations, and alumni status.

But then there are kids who want a higher education because they believe a college education is their ticket to gainful employment and well-compensated careers. They pay for it themselves, or their hardworking parents cosign on loans or take out personal loans on behalf of their kids' college dreams.

For them, higher education is increasingly looking like a scam…

These Aid Programs Only Add to the Debt Burden

Some critics complain that this is students' own fault, that they're pursuing the wrong majors. Or they say that colleges themselves are lacking, that they're not teaching what kids need to know in our ever-changing economy. 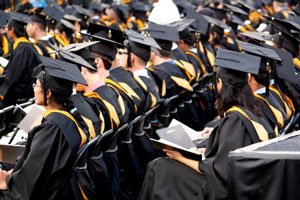 However, my problem isn't with education or kids' choices. Today I'm telling you where my beefs are – and why they're costing today's kids and their parents billions…

My first beef is with the come-ons that lure kids and their parents who can't afford college into indentured servitude.

Maybe if kids were guaranteed jobs that allowed them to pay off their loans, those crazy costs might be justifiable.

But there's no guarantee on jobs, and so those costs aren't justified.

Half of all kids who recently graduated colleges and universities are unemployed.

Students are saddled with an average of more than $37,000 in debt (as of 2017). This takes into account both those who got out relatively early without a degree and graduates who can owe $100,000 and more – well into their 50s.

And now they're being victimized by secondary scammers.

My second beef is with these "debt help" outfits that promise borrowers help and end up ripping off those least able to afford such scams.

Shah, thanking you for many articles biting at the system so often exploited by ourfellow Americans. Especially telling this article on Student loans and those promising ‘forgiveness/help.’ Is The Art of Moneymaking so idolized in our society that we permit, even foster these scams with our prverbial shoulder shrugs? Is there something terribly wrong with our pursuit?
thanks, M Miller