Editor's Note: Last year, Keith unveiled one of Wall Street's secrets - and how you can use that knowledge to beat the Street and turn middling returns into life-changing gains. We're sharing his insight with you again today so you have the profitable edge you need in the year ahead. Here's Keith...

For most investors, the relationship between investing and profits seems simple enough. You buy low, sell high, and your portfolio grows - or so goes the story.

In reality, success ultimately comes down to defeating something called "Gambler's Ruin."

We're going to talk about that today - what it is, what it means for your money and, most importantly, how to beat it.

It's a column you won't want to miss because it'll give you an edge other investors would pay dearly to have. Not one in 250,000 understands it.

Most investors have never heard of "Gambler's Ruin," but understanding its implications can make the difference between heartache and success in the stock market.

Gambler's Ruin is a mathematical principle that deals with the preservation of assets - or, more accurately, the probability that you'll lose them over time. 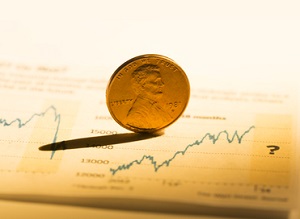 Imagine that Player One and Player Two each have a finite number of pennies, which they flip one at a time, calling "heads" or "tails." The player who calls the flip correctly gets to keep the penny.

Since a penny has only two sides, it would seem on the surface that each player has a 50% probability of winning - and that's indeed the case for each individual flip.

But, if the process is repeated indefinitely, the probability that one of the two players will eventually lose all his or her pennies is 100%.

In mathematical terms, the chance that Player One and Player Two (P1 and P2, respectively) will be rendered penniless is expressed as:

In plain English, what this says is that if you are one of the players, your chance of going bankrupt is equal to the ratio of pennies your opponent starts out with to the total number of pennies.

While there are wrinkles in the theory, the basic concept is that the player starting out with the smallest number of pennies has the greatest chance of going bankrupt.

In the stock market, the player with the smallest number of pennies is you... and me... and any other individual investor, for that matter, who is up against the big boys pushing highly leveraged portfolios worth billions.

Here's Why Professional Investors Always Take Money Off the Table

If you've ever been to Las Vegas or Monte Carlo, chances are you understand this at some level, if for no other reason than that the longer you stay at the tables, the greater the probability that you will lose. The house simply has more money and better odds.

Investing is much the same.

Since Wall Street casinos (read that as investment houses, hedge funds, mutual funds, and the like) have more pennies than their individual patrons (retail investors), they can play the game longer. Not better, longer.

More often than not, that means they come out ahead because the smaller players get wiped out or, as is the case over the past decade, give up.

That's why, unless you have some means of protecting your assets - whether you're at the gaming tables or in the stock market - the principle of Gambler's Ruin dictates that you will eventually give them up.

Perhaps that's through losses or the attrition of accumulated commissions and fees, but if you do not change your behavior, it will happen. The only question is when.

If you start with lots of money, it may take several generations, but the fact that it takes extra time doesn't invalidate the math.

But again, and I can't stress this enough - that's if you do nothing but play the odds.

To win, you just need to change your game in such a way that the odds reflect the strengths we bring to the table and to the markets as individual investors.

When you're going through periods of high growth, opportunities come at you so fast that it seems almost incomprehensible.

In that kind of environment, an investor can easily conclude he or she is a genius. That's very dangerous because the principle of Gambler's Ruin is still at work.

Even during the best of times, the markets move with alarming regularity to the downside. In fact, over time, about one in every three days is a down day. That's why profits just aren't simply a matter of finding opportunities and going along for the ride. You've got to have risk management top drawer at all times.

Each of these points are odds-eveners - for lack of a better term - that help you avoid Gambler's Ruin by exploiting weaknesses that take away the advantages of size and scale enjoyed by the big boys.

They're also winning characteristics that shift the house odds in your favor. You won't be going to the tables with a maximum loss in mind, to use a Vegas analogy, but, instead, with a winner's mentality.

How to Grow Your Pile of Chips Going Against the Pros

Every chance you get to bend the rules to your advantage equals higher potential returns.

But... but... Wall Street's big boys have a nearly infinite pile of chips and computers...

Even so, you can even the odds.