Having voiced my concerns on national media for a few months now, Cohn's departure is the last straw for skittish traders who crave stability. There doesn't seem to be anyone in the White House who can tell the president things he may not want to hear.

... trade wars are a "tax" on the American people.

Don't get me wrong, though.

I'm not picking a fight with the president or anyone else, for that matter.

I don't do politics.

My job as chief investment strategist is to help you make and protect your money no matter who is in the White House and no matter which party he or she represents or even which agenda they advance. So let's get that off the table.

What the United States Is - and Isn't - Competing For

The data is very clear that protectionist policies ultimately cause more broad-spread economic and financial damage than they fend off, all in the name of saving jobs in manufacturing sectors that "sunset" decades go.

What the president appears to be missing is something we talk about all the time - our economic future is knowledge-driven, not trade-led... or even production-created. Our nation is not, for example, competing with low-cost manufacturing in countries like China.

We are, however, competing with highly skilled labor and U.S. production capacity, knowledge, and intellectual property that's been "offshored."

Automation, robotics, the cloud, artificial intelligence... all were pioneered by American firms that now have operations spanning the globe and foreign partners capable of picking up the proverbial ball if needed. It's not for nothing that roughly 46% or more of S&P 500 sales come from outside our borders.

That's what's really at stake - our partners are learning to innovate faster than the West can maintain the knowledge that now drives them. And, they've got fewer logjams in the way.

Take China, for example. It's long been one of the president's favorite targets, yet the nation's companies are stepping onto the global stage far faster than most Westerners can comprehend. Alibaba Group Holding Ltd. (NYSE: BABA), for example, threatens Amazon.com Inc. (Nasdaq: AMZN) in key markets around the world. Baidu Inc. (Nasdaq: BIDU) is gearing up for a fight with Alphabet Inc. (Nasdaq: GOOGL).

Most people see this as a threat, but it's actually one of the world's most concentrated investment opportunities, and the investing landscape looks like this: 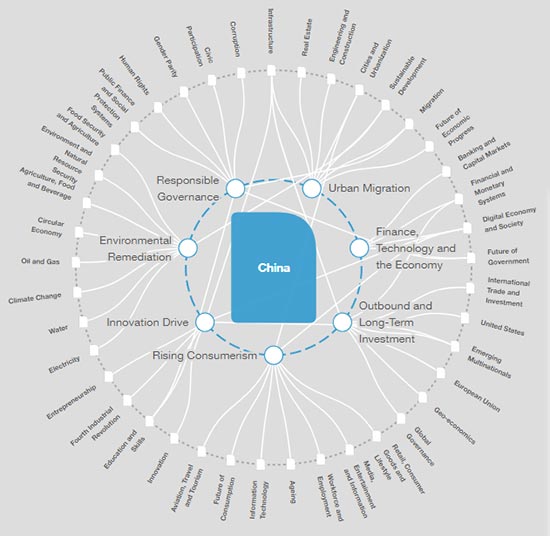 Source: World Economic Forum
The rub here is that protected companies lose the incentive to compete over time when they should be empowered by the rapidly growing competition that got them there in the first place.

I've personally seen, for example, the shift in languages and demographics that drives the Far East. When I first arrived in Japan, the single most important language to study if you wanted to get ahead in the 1980s was English. Now, it's Chinese.

When I arrived in China, most foreigners - particularly blond-haired, blue-eyed ones like myself - were assumed to be Russian. Now, they're assumed to be Americans (which really irritates the Russians, incidentally).

Monthly Checks Up to Three Times Higher than Social Security? Click Here for Details and to Learn How to Stake Your Claim.

In Vienna, there used to be a few Chinese fast food joints... now, there's an entire China "town" filled with legions of Chinese business professionals. And, not surprisingly, the $9 billion China's invested in Eastern Europe as part of the country's trillion-dollar One Belt One Road Initiative is clearing the road for direct Chinese foreign investment in Western Europe.

My point is that our future isn't about a few tourists or sports clubs any more. Instead, it's about real economic change that protectionism won't, ironically, protect.

For the most part, we've got this covered with the big, multinational world-class companies that we talk about regularly. They're the ones making "must-have" products and services that are tapped into the six Unstoppable Trends we follow, especially when it comes to technology and financials. So, I'm not worried about that aspect of things.

Instead, I'm thinking about how to play the situation for still bigger profits using currencies - now that a real trade war appears imminent...

I want to be a night trader.