I often hear from investors who love the Total Wealth approach but are either just starting out or simply don't have a lot of money to invest.

They want to know which big tech company would I recommend if they could only buy one of the "Big A's."

Frankly, it'd be very hard to go wrong with any of 'em over time, which is why I recommend positions in all three companies individually in my premium publication, the Money Map Report.

Apple's shares have risen more than 35% over the past 12 months, while Amazon's tacked on 25%. And last but by no means least, Alphabet shares have appreciated 15%.

The three are clearly competitors, and good ones at that. It doesn't matter whether you're talking mobile phones, smart devices, the Internet of Things, interactive households, media, or even Big Data - just to name a few product sets. They've all got serious potential.

But again, that's not the question at hand.

We're here to talk about which one company I would pick if I had to buy "just" one.

Here's how to break the situation down.

The first step in finding new wealth is to see which companies have produced it historically.

That way you can understand the relative impact the companies you're interested in have had on the financial markets. You'll also know whether or not institutional investors are "all in."

The bigger the number, the better.

That's because any company that's created huge amounts of wealth is unlikely to be abandoned even if the "you know what" hits the fan.

Apple's the undisputed winner by this metric by virtue of the fact that the company has created an estimated $1 trillion in wealth.

In fact, Apple has created more wealth for investors than any other single stock since 1926, according to finance professor Hendrik Bessembinder of Arizona State University's W.P. Carey School of Business. 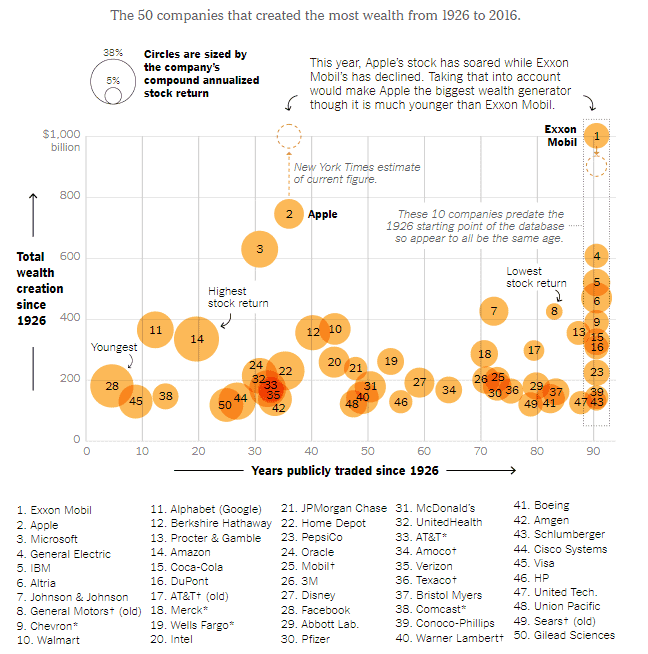 Interestingly, Amazon and Alphabet aren't far behind despite the fact that they're both much younger companies. Alphabet comes in at 11th, while Amazon is 14th.

A glance at the pace of revenue generation tells you a lot.

What I'm looking for here is simply the speed at which a given company is pulling in money.

Step 2: Look Forward - Not in the Rearview (Like Most Investors)

Next, it's important to think about what a company will become, rather than what it's been.

That way you'll have a vision with regard to what's possible instead of just what's happened, which is how most investors miss the boat time and again - especially when it comes to life-altering wealth potential.

For example, millions of investors still think about Apple as a device company, which is why they can't wait to latch on to the next iPhone, watch, or Siri speaker. They are completely missing the fact that Apple is a company in transition.

Maximize Your Retirement: Participating in a 401(k) plan puts you ahead of most Americans. But these overlooked benefits offer a game-changing shot in the arm for your nest egg. Read more...

The Apple of the future is all about services, apps, and the ecosphere - meaning surrounding your life with Apple products driven by Apple code.

Apple services, for example, now account for approximately $7.3 billion in revenue, and that figure is growing by 25% to 30% a year. To put that in context, the services unit is potentially the size of a Fortune 100 company all by itself - something CEO Tim Cook noted during the company's most recent earnings call on Aug. 1, 2017.

Amazon, on the other hand, has very strong roots in retail and it's obviously a primary contributor to the "Retail Ice Age" I told you was coming years ago. Not only would mom-and-pop stores be impacted, but Amazon's very existence would force investors to rethink previously unassailable retailers like Sears Holding Corp. (Nasdaq: SHLD), which were (and still are) among the most dangerous stocks you can own because of their potential to completely destroy an investment portfolio as they collapse.

Amazon's future is all about big data, big services, and the customer experience (which I'll return to in a moment).

Contrary to what a lot of investors believe, the Amazon of the future is not about shopping.

Alphabet, on the other hand, began with a search engine and ad revenue, which is why the company remains locked in competition with any upstart trying to figure out what people are looking for and why.

Going forward, though, Alphabet is about everything from self-driving cars to medical tech.

Now let's talk about what a company is actually "worth."

Most investors rely on the price/earnings ratio because it's a mainstay in "value investing" - meaning the practice of selecting stocks that are believed to be undervalued by the markets.

When you hear conventional analysts talking about whether specific companies are "expensive" or comparatively "cheap" on your favorite financial shows, this is usually the metric they're referring to at a specific moment in time.

Incidentally, PE ratios have no predictive value whatsoever - so don't get hung up on them.

The far better measure is the PEG ratio, which stands for price/earnings to growth, or "PEG" for short.

The PEG measures the trade-off between a stock's price and the earnings generated per share, which makes it a far better reflection of what a company is worth over time. That means the PEG is more like a movie than the single snapshot that is the PE ratio.

PEG ratios under 1 reflect a company that's a good buy, while PEG ratios over 1 denote progressively expensive prices for an expected stream of earnings. Prioritizing companies with lower PEG ratios can help you "buy low and sell high" consistently because they ensure you're not paying too much for any stock given earnings expectations.

At this point in your analysis, you should be beginning to develop a pretty good understanding of what the company looks like going forward, which is why I suggest you also look at another ratio that most analysts overlook to confirm your findings.