The United States is not yet energy independent, but it will be soon. If current trends hold, the U.S.' energy production will match its demand for energy by around 2025.

You see, energy independence is achieved when a country produces all the energy it consumes and doesn't need to rely on foreign sources of energy. 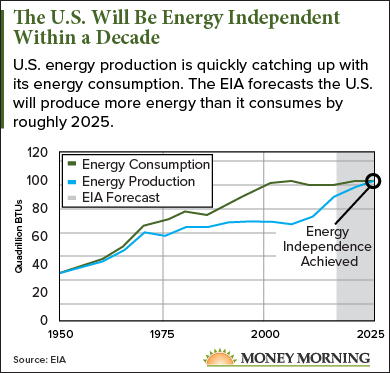 Achieving energy independence is an alluring goal for American politicians. Freeing the country from dependence on foreign sources of energy strengthens national security since the country wouldn't be reliant on oil from the tumultuous Middle East or unstable countries like Venezuela.

How the U.S. Will Become Energy Independent

Adding 13.2 quadrillion Btus of energy is entirely possible, but that growth has to come from just three sectors: crude oil, natural gas, and renewable energy.

The EIA projects renewable energy production will grow 103% by 2025.

What's even better for investors are the new innovations and discoveries in each sector that are driving their growth rates.

Consider the oil and gas sectors. Horizontal drilling and hydraulic fracturing - or fracking - have dramatically expanded America's oil and gas reserves. Starting around 2008, the use of fracking became widespread, making oil and gas trapped in shale rock recoverable.

For natural gas, this meant the gargantuan Marcellus formation - the largest natural gas play in North America - was now accessible. Natural gas production is up 40% since fracking woke up the Marcellus play in 2008.

And just last year, 20 billion barrels of recoverable oil were discovered in the Permian Basin in West Texas. That could make it one of the world's largest sources of oil and a key for American energy independence thanks to horizontal drilling. 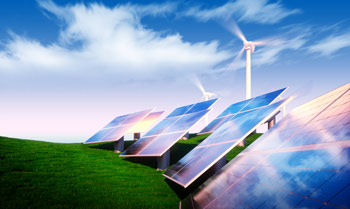 Better technology is lowering costs in the renewable industry, especially for wind and solar. The costs of producing electricity from solar energy are 1/150th of their costs in the 1970s. Falling costs are a big reason why solar energy has now achieved grid parity in 20 states. That means it's just as cheap to use solar power as it is traditional sources.

In 2016, 40% of all new electric-generating capacity came from solar energy, which was the most of all energy sources. By 2018 alone, the EIA forecasts the solar industry will grow by 60%.

Achieving American energy independence means the oil, gas, and renewable energy sectors, especially solar energy, will be growing rapidly through 2025. Right now is the perfect time for investors to jump into oil, gas, and solar.

To help you make the right investing decision, we're showing you three of our favorite energy stocks, one from each of these booming sectors...