Editor's Note: Many individual investors struggle to cut losses because of an aversion to being wrong. It's a hard habit to break, but successful investing depends on it. Here's how to unlearn what you have learned and become a successful "aggressive-conservative" investor...

Most individual investors, whatever their background, don't want to cut losses because they're programmed since childhood with an aversion to... being wrong.

We all want to be right.

As a result, they sit, paralyzed, in losing trades far longer than they should, letting small (manageable) losses turn into huge (catastrophic) losses.

It's unsurprising, if you think about it. It's all in the programming.

Most professional traders, on the other hand, don't have this problem. In fact, they don't particularly care if they are right on every trade. This sounds crazy, but it's not uncommon for a professional trader to be wrong 75%, 85%, or more of the time.

In fact, I remember legendary trader Dennis Gartman explaining once that the more trades he was "wrong" on, the more money he made at the end of the year.

Let me show you how this counterintuitive, profitable mindset works. You're going to love the gains you start pulling down once you see this...

Profit Comfortably... and Be Wrong 80% of the Time

Like I said, this sounds strange, but it's actually really simple:

A little simple math will go a long way toward illustrating this point.

This Simple Pattern Can Help You Make Millions: At 313% average weekly gains (including partial closeouts), this strategy is leaving Wall Street Elite in the dust. Space is limited, so you'll have to act fast for your chance at triple-digit gains...

Talk about taking it easy on yourself. In this example you can be wrong 80% of the time and you're still up 22% after 10 trades.

Professional traders refer to this as "reward/risk trading," because the potential reward far surpasses the risk.

In my Small-Cap Rocket Alert trading service, we take this approach all the time, and we just took profits from our sixth triple-digit gain of 2016. At the same time, we're down on just two of 16 open stock positions as I write.

Just to be clear, I'm not suggesting you use 1% trailing stops on your positions - although you could do that if that's what fits your risk tolerance and trading style. 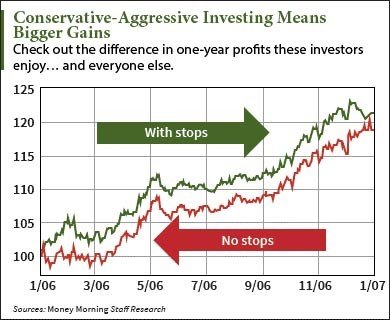 Instead, what I'm suggesting in the example above is that you "limit your losses" to $1,000 per trade. Obviously, that number would change depending on the size of your trading account.

For example, check out the following scenarios based on that hypothetical $100,000 chunk of capital I mentioned.

You can move those numbers around till the cows come home to get different variations, but there's one very important risk-management consideration to remember...

The larger your initial position size, the larger amount of initial risk you're taking on in the event something happens in the pre-market, after-hours, or even in midday trading.

How to Use This Technique in the Real World

Like the theory, the practice is actually pretty simple...