I'm typing with a heavy hand and an equally heavy heart following the horrendous events in Las Vegas earlier this week. It's a city I know well and have enjoyed tremendously over the years.

As with any act of violence no matter where in the world it happens, it's difficult to imagine how a nation, and so many people who have had their lives tragically shattered, will bounce back.

Many investors are wondering why the financial markets didn't come unglued when news of the shooting broke.

In years past, they would have gone straight down or at least stopped in their tracks. Yet, incredibly, the opposite is happening.

The markets powered up Monday, then again Tuesday, to notch a new five-day winning streak at record highs. And, they're up again in early trading Wednesday morning as I write.

In the years since 9/11, traders have learned to distinguish between two types of events:

Today's financial markets are truly global, which means that they are increasingly impervious to highly localized trauma, regardless of why it occurs or even who causes it.

People often ask me how that can be at a time when nationalism is on the rise and national borders seem to be going up rather than coming down.

Here, too, there's an explanation.

In contrast to the 1950s and early 1960s when the world's major partners developed in comparative isolation thanks to international trade agreements like the Bretton Woods and General Agreement on Tariffs and Trade (GATT), today's finances are completely integrated. That means money moves even if traditional goods and services don't.

In the old days, there were clear channels between investors, brokers, banks, and their intermediaries in global markets – and a relatively short list of financial instruments between them – which is why the markets often came to a standstill whenever something traumatic happened.

Today, those channels have largely disappeared.

What you have in place of all that is a hornet's nest of derivatives, currency swaps, stocks, bonds, options, futures, commodities, and interest-rate-sensitive tools that can be traded 24 × 7,365 days a year – all of which are immediately accessible anywhere on the planet using nothing more complicated than your average smartphone.

That's hard to imagine, but here's an image that will help you visualize what I'm talking about. 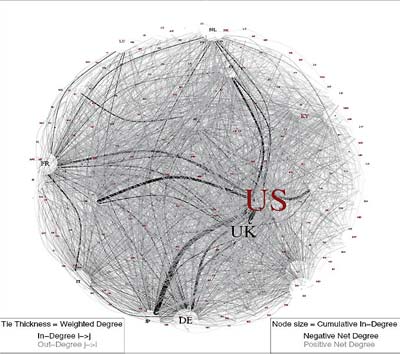 For millions stung by the global financial crisis, it's hard to believe that such a mash-up is a good thing when it comes to your money.

Growth May Slow, but It Will Not Stop

You see, the complex nature of the global financial network that's so very confusing and complicated also makes it nearly impossible for global traders to walk away even if they want to. They have to keep their money moving because that's the only way they will tap into growth.

And growth, as we have discussed many times, is about the future.

It may slow down for short periods of time, but it will not stop.

That's why you and your money need to be "in to win," and not just when it feels good, either.

It's very real and very valuable advice because the potential profits associated with future growth far outweigh the opportunity cost of having cash sitting on the sidelines doing nothing in reaction to the past.

For example, buying stocks when the S&P 500 has closed down 5% has yielded an average of 19% a year and average returns of 75% over the subsequent five years. And if there are no dips, as has been the case recently?

i am fully in agreement that market growth has gone global and not any one incident can curtail its advancement.