If you're tired of watching the rich get richer...

If you'd like to turn the tables for once...

Then you will definitely want to read today's column.

Not one in 1,000,000 investors had heard of Japanese billionaire Masayoshi Son before last Monday...

...but they got a quick education when news broke that his company, SoftBank Group Corp. (OTCMKTS: SFTBY), closed its aptly named venture capital Vision Fund with $93 billion in commitments, on its way to $100 billion by fall.

Make no bones about it.

The Vision Fund is a game changer. What's more, it's indirectly going to be one of the biggest tech investment opportunities you're ever going to see.

If you play it correctly.

SoftBank's Vision Fund is now the single largest venture capital tech fund in the world. Chairman Masayoshi Son oozes confidence and has a 300-year business plan intended to turn SoftBank into the world's most valuable company.

One hundred billion dollars is such a large number that most calculators will convert the display to 1.000E+11 when you type it in.

Clearly, a little perspective is in order to frame the opportunity I want to share with you today.

...you could give $13 dollars to every person alive today and still have change left.

...you could singlehandedly take down 100% of the $100 billion worth of venture capital deals made last year, according to Peqin, as reported by Bloomberg.

All of the world's deep pockets are on board. 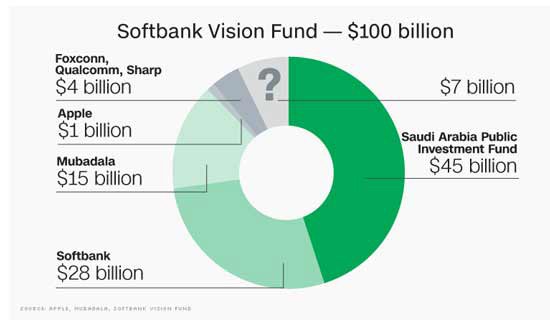 And that's your entry.

Just like a rising tide lifts all boats, more money will dramatically boost stock prices worldwide in general, but especially those with even a sliver of technology exposure. Private-equity firms are sitting on $820 billion in cash at the moment, so we're talking a whopping total of $920 billion dollars.

This won't happen instantly, of course, but it will happen just as it has throughout history whenever large amounts of money entered the world's financial markets.

The fact that SoftBank's Vision Fund has to place $100 billion means that other venture capitalists are going to have to pay a lot more money to buy what they want. And here's the important part... whether or not the companies they buy deserve it.

Critics say that a similar disregard for what companies are really worth parallels the late 1990s, when money flooded into newly hatched Internet companies that then, in turn, crashed.

I think their fears are overblown.

And third, the risk of a market crash driven by technology stocks a la the Internet Bubble in 2000 just fell off a cliff.

Think about how the VC process works.

Venture capitalists not only provide important funding as companies develop, but they also ensure there's an exit strategy - meaning that they give founders, early investors, and angel backers a way out. Usually this is an IPO, but it could also be a buyout or even a spinout.

This much capital will unleash innovation on a previously unimaginable scale. The key, of course, is not to get separated from your money when that happens.

That's where the Vision Fund comes in.

Son's made no bones about how his fund intends to operate. He will be purchasing shares of everything from nascent startups to established and very well-known companies (that he has declined to name, naturally). He typically does so in $250 million chunks that have been well documented over the years because of the power that cash gives companies fortunate enough to attract his attention.

Back in 2014, for example, Son's fund invested $20 million in a little-known, unproven tech startup founded by an English teacher from a city called Hangzhou in China.

That former teacher was Jack Ma, founder and executive chairman of the e-commerce behemoth Alibaba Holding Group Ltd. (NYSE: BABA), and that $20 million investment turned into more than $53 billion upon BABA's record-breaking IPO.

Today, that same stake is worth an estimated $90 billion.

He reportedly did the same with WeWork Cos. Inc., which saw its value jump from $16 billion to $18 billion upon the news.

Noted UTStarcom Holdings co-founder Hong Lu, "It's like [Son's] from the future."

Now, for the fun part.

Normally, you'd have two choices when it comes to a deal like this: a) you could buy into the Vision Fund directly if you had deep enough pockets and access to some closely guarded relationships, or b) you'd have to line up for as of yet initial public offerings and take your chances.

I've got three for you to consider.

Excited to join…. Can't wait to see whats its all about

Can't wait to get in on this!

Thanks for good news